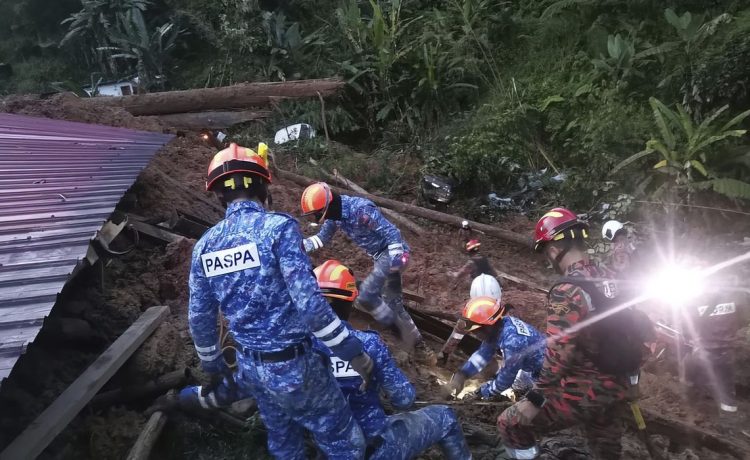 KUALA LUMPUR, Malaysia — Two people died and 51 others were feared buried after a landslide hit a camping ground on an organic farm outside Kuala Lumpur early Friday, Malaysia’s fire and rescue department said.

A total of 79 people were believed to have been at the campsite in Batang Kali in central Selangor state, around 50 kilometers (31 miles) north of Kuala Lumpur, when the incident occurred, the department said in a statement. The campsite, where people can pitch tents or rent them from the farm, is popular with locals.

A child and a woman were found dead, a fire department official told The Associated Press. Three people were injured while rescuers were searching for the estimated 51 missing people, the department said. Another 23 people have been rescued.

Selangor Fire and Rescue Department chief Norazam Khamis was reported by Bernama news agency as saying that firefighters began arriving at the scene half an hour after receiving a distress call at 2:24 a.m. (1824 GMT Wednesday).

The landslide fell from an estimated height of 30 meters (98 feet) and covered an area of about three acres (1.2 hectare), the department said. It posted pictures of rescuers with flashlights digging through soil and rubble in the early hours of the morning.

The campsite is located on an organic farm not far from the Genting Highlands hill resort, a popular tourist destination with theme parks and Malaysia’s only casino. Bernama posted a video of some families with young children who were rescued taking refuge at a police station nearby.