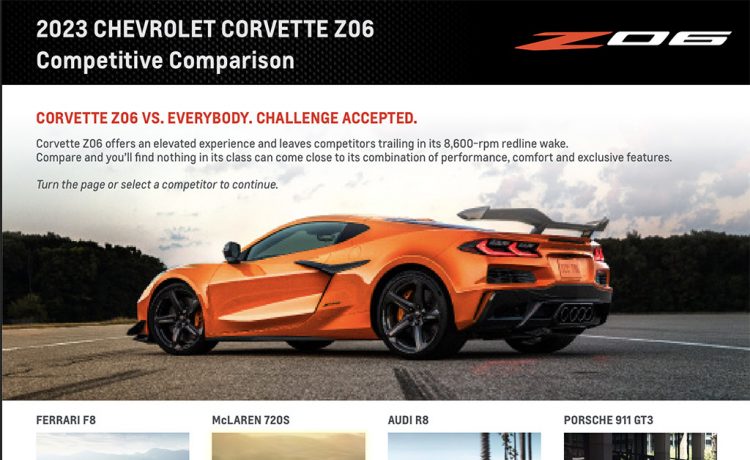 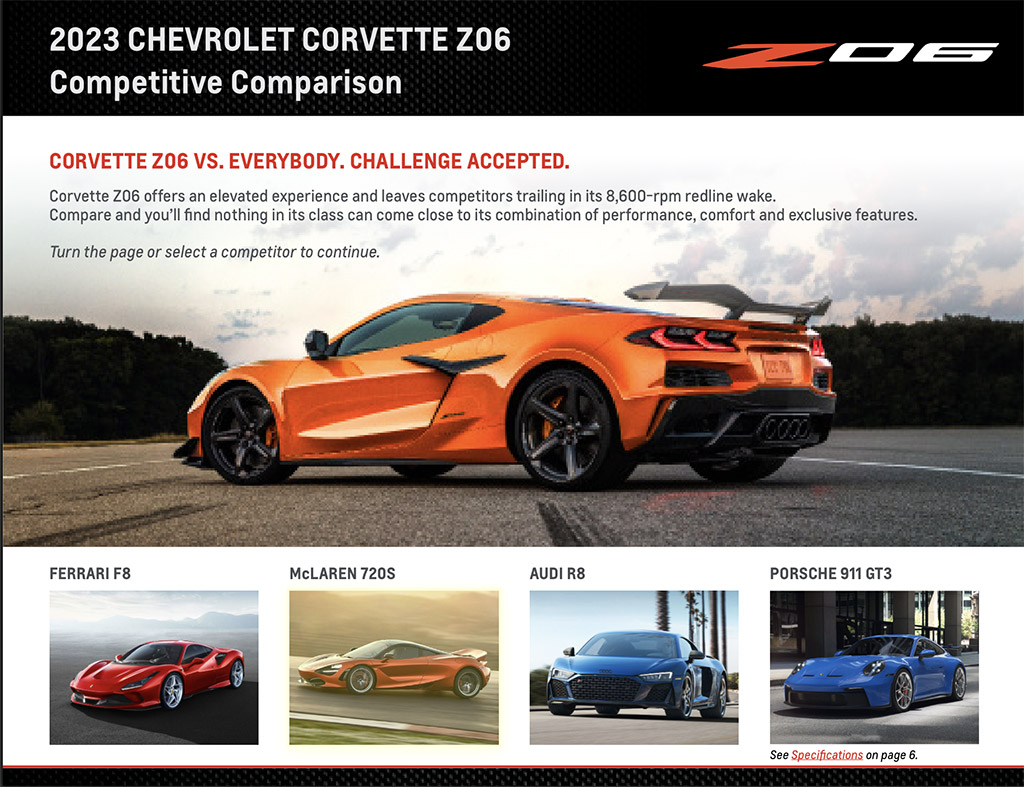 When Chevrolet first revealed the 2023 Corvette Z06 last year, they boldly proclaimed America’s newest sportscar was ready to take on the world. And while it may indeed be a world-beating supercar, it appears that Chevrolet has four specific competitors in mind.

This six-page PDF file was discovered by a Corvette Forum member and posted over the weekend. The document offers a competitive comparison between the new 2023 Z06 against the Ferrari F8, McLaren 70S, Audi R8, and the Porsche 911 GT3. The competitive comparison shares the pros and cons for each of the four competing models, as well as suggests how a particular positive point for each of these competitors can be turned into a positive for the Z06.

We’re not sure if this is an official GM document, but it sure looks like something developed for sales professionals that are designed to counter customer objections. The document shows a version date of 5/24/2022 and there are still a few pieces of info missing from the Z06 including price and a top speed which both have a ‘TBD’ (to be determined) listed next to them.

One of the points of info that our friends at the MidEngineCorvetteForum.com picked up on is the Audi R8 slide that lists one of the lows as being an “EPA-rated 14 MPG City and just 23 MPG highway” from its naturally-aspirated 5.2-liter V10 engine. The word ‘just’ makes it appear that Chevrolet is suggesting the Z06’s fuel economy numbers will be better, or at least the Highway number will be higher than 23. While most Corvette owners will say they don’t care about the Z06’s fuel economy numbers, we are expecting the LT6 to have a gas-guzzler tax and so that makes the EPA numbers relevant.

Here are the six slides and you can click each one to make larger:

Since the arrival of the mid-engine C8 Corvette platform, we’ve seen greater interest in Stingray and Z06 models from those who can afford these exotic competitors. The C8 Corvette Stingray has consistently punched about its weight class in both features and performance, and we expect the new Z06 to take the fight even more directly to the competition.

Corvette Sales Dominated the Competition During 2021


[VIDEO] What to Expect When Chevy Prices the C8 Corvette Z06