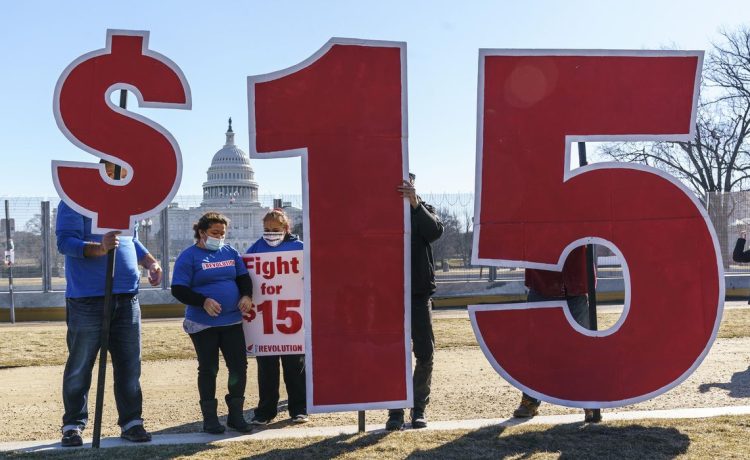 Hourly workers in 26 states will see minimum wage hikes in 2023 — but financial analysts say the increases are lagging behind inflation and could worsen unemployment in a recession.

Half the states that have announced increases tie them annually to inflation, and some cap them “to protect against big jumps,” accounting firm Wolters Kluwer reported in an analysis.

“The high rate of inflation in the last year has had a significant impact on minimum wages in the 13 states, the District of Columbia and the numerous cities and counties that tie their minimum wage rate to the Consumer Price Index,” Deirdre Kennedy, senior payroll analyst at Wolters Kluwer Legal & Regulatory U.S., told The Washington Times.

Most of the states have already bumped the federal minimum wage of $7.25 an hour for nontipped workers, which hasn’t increased since 2009, to at least $10 an hour. Inflation has pushed them to go even higher next year, Ms. Kennedy said.

Wolters Kluwer found that Washington, which ties annual increases to inflation, will have the highest state minimum wage in the country as it rises from $14.49 to $15.74 an hour. The state will also let workers younger than 16 earn 85% of the new adult minimum wage, or $13.38 per hour, in 2023.

Hourly workers in Washington, D.C., already earned more than that this year — $16.10 per hour — and could see another increase in July when city officials decide the next minimum wage adjustment.

The upcoming hikes will eliminate many low-skilled jobs if a recession sparks widespread layoffs in the new year, some financial analysts warn.

“Minimum-wage hikes will force many employers to cut hours, reduce available positions or even consider substitutes to physical labor such as automation,” Ms. Baldau said in an email.

“If the minimum wage is $7 per hour, no one whose productivity is less than that will have a job,” Mr. Block said. “If it is raised to $10 per hour, people with productivity between $7 and $10 will lose their jobs.”

“It is likely to displace many workers into the underground economy,” Mr. Lacalle said in an email. “This is a special concern due to the risk of recession.”

Even states that cap the annual percent change to keep their raises smaller will see significant hikes in the coming year, Wolters Kluwer found.

California will raise its minimum wage from $15 for large employers and $14 for small employers this year to $15.50 for all employers in 2023.

The state’s FAST Recovery Act will let a government-appointed council set a minimum wage of up to $22 an hour for about 600,000 fast-food workers starting Jan. 1.

Elsewhere, Massachusetts and Connecticut will raise their minimums to $15 in 2023. Maryland will implement a scheduled hike of $1.25, reaching $13.25 for large employers, while Virginia increases its minimum by $1 to $12 an hour.

New Jersey, Delaware, Illinois, Maryland, Rhode Island, Florida and Virginia will gradually increase their minimum wages to $15 through scheduled increases over the next few years.

Other hikes will not begin until after the coming year.

Nevada voters recently approved a measure to raise the state minimum wage to $12 per hour in 2024.

And Nebraska voters approved upping the minimum from $9 to $15 per hour by 2026. The rate will adjust annually based on inflation after that.

“It will result in labor shortages and potentially higher prices for customers,” said Michael Austin, a former chief economic adviser to two Kansas governors and an economist at the National Center for Public Policy Research’s Project 21. “That’s because the only way an employer can raise the wages for a few, outside of growing profits, is by reducing the wages of many.”

Shortages of service and farm workers have already pushed wages beyond the increases in most of the 26 states, added David Sacco, a finance professor at the University of New Haven.

“Private employers, especially the large ones, have been increasing wages to attract enough employees as the economy has recovered and, in many cases, those hourly wages are already higher than the new minimum wage laws,” Mr. Sacco said in an email.

Average hourly earnings for private sector workers rose 18 cents to $32.82 last month and grew 5.1% over the previous 12 months, according to the Department of Labor’s latest figures.

Although the department provides an overview of state minimum wages, it has not yet updated its analysis to reflect 2023 rates.

“Minimum wage increases don’t directly benefit most workers since they already earn above that,” said Sean Higgins, an analyst at the libertarian Competitive Enterprise Institute. “The higher wages contribute to inflation, which undermines the gains from the increase, ultimately leaving workers no better off.”