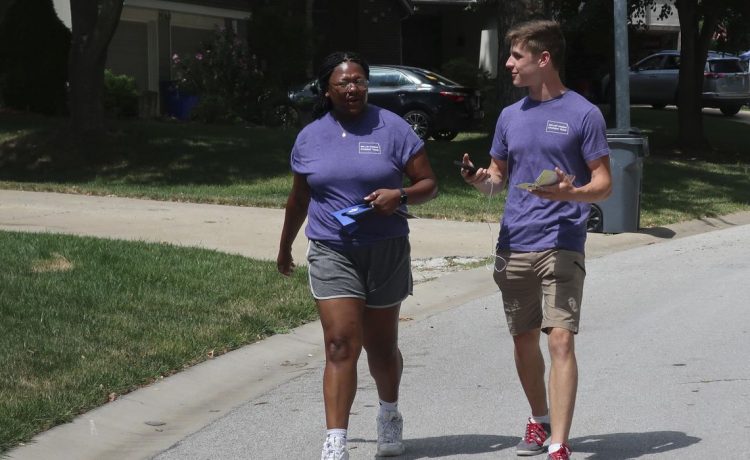 TOPEKA, Kan. (AP) — Early voting is surging in Kansas head of next week’s statewide abortion vote and the electorate so far is leaning more Democratic than usual.

More than 2½ times as many people had cast early ballots as of Tuesday compared to the same point in the 2018 mid-term primary, the Kansas secretary of state’s office reported. Voters will decide Aug. 2 whether to amend the Kansas Constitution to allow the Legislature to further restrict or ban abortion.

Polling has suggested that Democrats are far stronger supporters of abortion rights than Republicans, and Democrats so far make up 42% of the people who have cast ballots early in Kansas, compared to 44% for Republicans. Over the past 10 years, Republicans have typically cast twice as many ballots in a primary election as Democrats. Unaffiliated voters – who can’t participate in a partisan primary unless they pick a party label – have cast nearly 14% of the early votes.

The Kansas vote is the first statewide referendum on abortion policy since the U.S. Supreme Court overturned Roe v. Wade in late June. In Douglas County, among a few Democratic strongholds in Republican-leaning Kansas and home to the liberal main University of Kansas campus, 5,800 people already have cast early in-person ballots. The normal figure for a primary is about 2,200, said County Clerk Jamie Shew, who oversees its elections.

“Very rarely do you see an event that has a clear impact like that,” said Shew, an elected Democrat.

A poll from The Associated Press-NORC Center for Public Affairs Research at the start of July showed that 33% of Democrats interviewed considered abortion and women’s rights a top issue, up from just 3% in 2020.

In Kansas, Republicans have long had an advantage in voter numbers. As of July 1, they made up about 44% of the state’s 1.9 million registered voters, compared to 26% for Democrats and 29% for unaffiliated voters. Also, Democrats historically have had fewer competitive primaries than Republicans for statewide and legislative offices, and that’s true this year. Both of those historical trends normally would argue for low Democratic turnout.

The Republican-controlled Legislature put the anti-abortion measure on the ballot to overturn a 2019 state Supreme Court decision declaring access to abortion a “fundamental” right under the state constitution. The measure would add language saying the state constitution does not grant a right to abortion, allowing lawmakers to regulate it as they see fit.

Supporters wanted the question on the August ballot, arguing that it would get the attention it deserves then instead of getting lost amid Democratic Gov. Laura Kelly’s difficult race for reelection in the fall.

“We’re glad to see many Kansans engaging in the democratic process and hopeful that they are educating themselves about what the amendment truly is and does,” said Mackenzie Haddix, a spokesperson for the main group supporting the proposed amendment.

Even with a surge in early voting, far fewer people are likely to cast ballots in August than in the November general election. Shew sent postcards to all of his county’s unaffiliated voters, telling them how they can vote on the amendment because they are “just not used to voting in August.”

“It’s still very much an uphill battle for us because of that, but we’re encouraged by the energy and engagement that we’ve seen from voters, not just Democratic voters,” said Ashley All, a spokesperson for the main coalition opposing the measure.