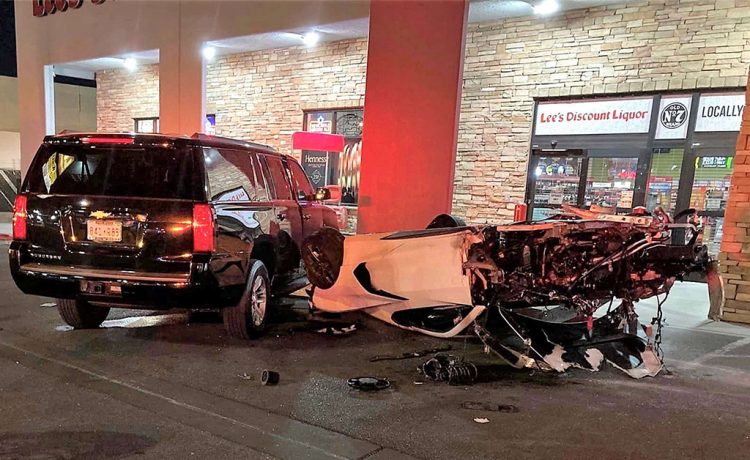 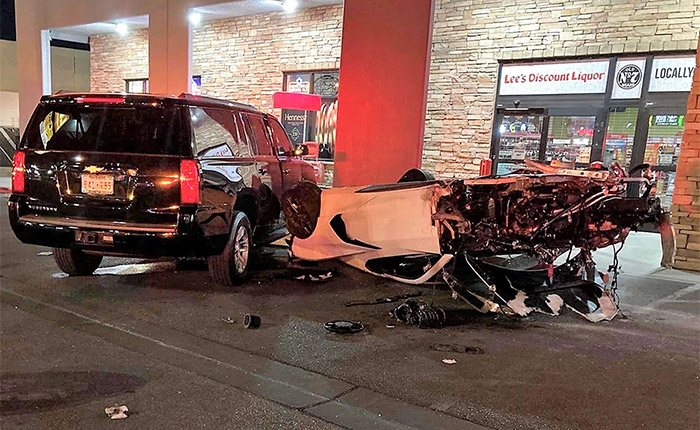 An episode of street racing in Las Vegas on Monday night ended with an Arctic White C8 Corvette upside down next to a liquor store, one of its tires ripped off – standing nearby – and its front end virtually destroyed.

Reports say as many as six other vehicles may also have been involved in the crash, which left debris scattered a quarter-mile down the road and three vehicles with major damage.

Las Vegas Metro Police Department blames the incident on a street race between the C8 and a Toyota Supra, with the cars believed to have been traveling more than 100 miles per hour before running a red light and crashing, leaving one person hospitalized. 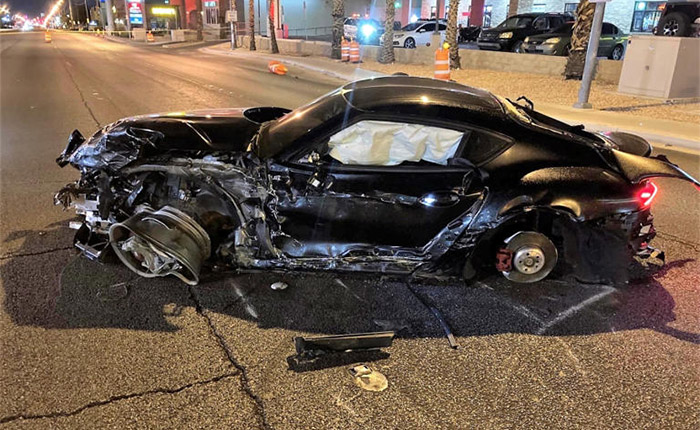 So far, 25-year-old Joshua Daya is the only arrest, charged with reckless driving, participating in a speed contest, and disregard for the safety of a person and property. Media reports don’t disclose which vehicle he was driving.

Megan Streater, manager of a nearby store called Smokes Mart, told Fox5 News reporter Dani Masten she is still shaken up about the wreck, saying: “It was just like an astronomical boom like a bomb went off and that is when all the power got cut and then we only saw smoke outside of our window and what I pieced together really quickly was like a bomb went off. It didn’t sound like screeching or a collision, like classic car accident sounds. It was just a huge boom.”

The crash happened about 9 p.m. near the intersection of Ft. Apache and Flamingo roads, knocking out power to the area and destroying a bus stop and a fire hydrant. Other parked cars and utility poles were also hit.

Street racing has become a problem in Las Vegas, prompting the police department to organize RAID, or Racing Apprehension and Intervention Detail, a specialized team aimed at takeovers, street racing, and reckless driving in all forms. 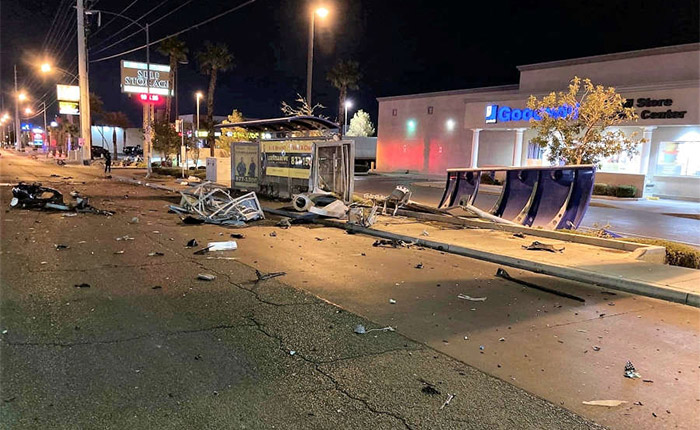 Fatal crashes in Clark County have climbed 11 percent this year, according to a story in the Las Vegas Review-Journal. “The biggest influence on traffic deaths is omnipresence, us doing enforcement,” Sheriff Joe Lombardo said. “Education, engineering, and enforcement – those are the three E’s in traffic.”

Since its inception in March, RAID has already made 119 arrests, handed out 144 citations, towed 149 vehicles, and seized 17 firearms.

“There’s two guarantees that I want to put out there for you as the community,” Lombardo said. “We are going to be relentless in our pursuits of these reckless drivers and takeovers in our intersections, and also we are going to do everything that we can to get intervention for those who need help.”

To those people who might think RAID is being too strict, Lombardo says:

“But even in those situations, people say, ‘Oh, it’s just people having fun and venting, and drag racing.’ A lot of people get hurt in that space. And a lot of people get inconvenienced. A lot of people’s constitutional right of freedom is affected. You know, you have no right to take over somebody else’s free movement, and here they are taking over intersections, filming themselves.”