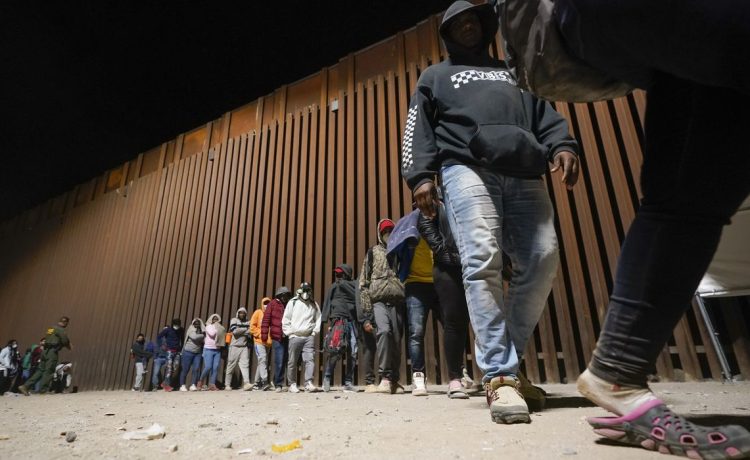 Immigrant-rights activists will descend on Washington this week to urge Democrats to take advantage of what may be their last remaining weeks of total control of Congress to pass a broad legalization bill for illegal immigrants.

Activists see a window of opportunity after Republicans ran hard on stricter border enforcement as an issue in the election — and failed to produce the political red wave GOP voters had hoped for.

Angelica Salas, executive director of the Coalition for Humane Immigrant Rights, which is organizing the activists’ trip to Washington, said the next weeks are “a golden opportunity” for lawmakers to tackle what she called “this 30-year albatross around the neck of our nation.”

“Latino and immigrant voters all across the nation are waiting on this Congress to deliver on their promises to uplift our community and recognize them with a path to full integration into society,” Ms. Salas said.

The last time Congress passed a major legalization bill was in 1986, and it’s been more than 20 years since even a smaller legalization cleared Capitol Hill.

Whether there’s an appetite for a deal now is very much in question.

For activists, the possibilities are compelling.

They point to the likely incoming Republican-controlled House, which will be less favorable to legalization, as a factor pushing for action. They also say the chance to clear at least part of the thorny issue in a lame-duck Congress could be compelling.

“For Democrats to delay passing meaningful protections once again, despite the stakes of this moment, would be a cruel slap in the face to the 11 million undocumented people whose livelihoods depend on it,” he said.

One activist said they’ll know this week whether any legislation is possible.

“I’d say we’re in the hopeful stage where we’re hoping people will come together and talk,” the activist said.

But Mark Krikorian, executive director at the Center for Immigration Studies, which backs stricter immigration policies, said he thinks the window is narrower now. He said key Republicans are less likely to want to cut a deal, fearing they might anger an already dispirited party base.

“I just don’t see much stomach for following these disappointing election results with embracing an amnesty,” he said.

Should lawmakers attempt it, there are still huge unanswered questions, chief among them how big to aim.

The activists in Ms. Salas’s group are shooting big, calling on Congress to update the “registration” date that allows illegal immigrants who arrived by that deadline to apply for legal status. The current date is 1972. Changing it to 2015 could open a window for up to 8 million people to apply.

Other activists, though, say that’s too big a lift this year. They say a smaller bill that combines legal status for “Dreamers” and a few other categories — farm workers or Afghan evacuees, for example — is more believable.

Then there’s the question of what enforcement measures Democrats are willing to stomach to get enough Republicans to pass the legalization program.

“Because so much work has been done over the past two years, on Dreamers, the agriculture workforce, even on borders, we’re hopeful you could see Congress pick up that work and get something done,” Mr. Benenson said.

Some Republicans in the wake of last week’s elections have suggested an opening on immigration, but with a narrower focus than Democrats want.

Sen. Mitt Romney in an op-ed in the Wall Street Journal proposed expanding legal immigration, calling it an answer to rising inflation.

The Utah Republican said the country needs at least one million newcomers a year just “to keep the population from declining.” But he said any deal to increase numbers also must include some new enforcement.

“I asked a leading Democrat why his party hasn’t acted to secure the border, especially since its failure to do so gives my party a huge advantage in swing states such as Arizona and Nevada. His answer: ‘You don’t understand the power of the immigration lobby. Madness,” Mr. Romney wrote.

“Democrats’ continued Senate majority is built on the backs of the Latino voters,” said Vanessa Cardenas, executive director at America’s Voice. “The Republican Party needs to rein in its dangerous extremism for the sake of their political future and our country’s democracy and Democrats need to follow through with concrete action on immigration.”

Mr. Krikorian, though, said Republicans are making gains among Hispanic voters. He pointed to the election of Rep. Monica De La Cruz, who flipped a Democrat-held seat in southern Texas.

“The Hispanic shift to Republicans is still happening, it’s just a process, not an event,” Mr. Krikorian said.

Immigration has been tried in a lame-duck session before.

In late 2010, when Democrats were about to lose control of the House in the upcoming Congress — just like now — they tried to pass the Dream Act. That would have granted legal status to illegal immigrants who came to the U.S. as children.

The bill cleared the House but foundered in the Senate, where it fell five votes shy of the 60 needed to overcome a filibuster in the Senate.

Most Republicans, joined by a few Democrats, said they weren’t willing to grant legal status to illegal immigrants without more action to secure the border.