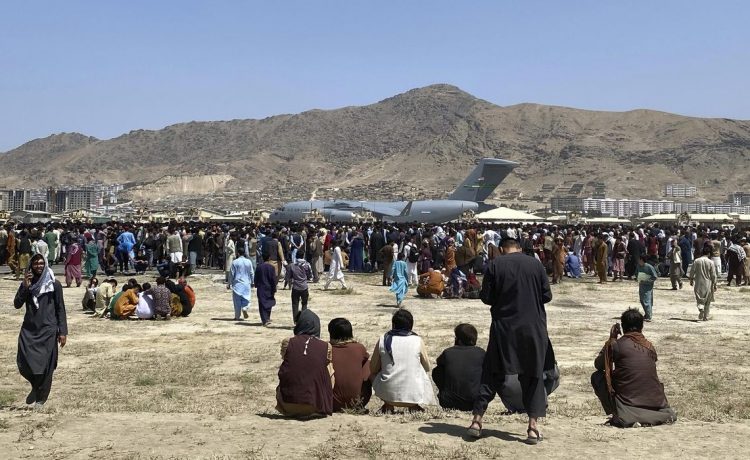 At the height of the chaotic U.S. evacuation from Afghanistan, first lady Jill Biden’s office went outside the normal channels and begged veterans groups to help find a way to evacuate people who were having trouble navigating the process.

So did Vice President Kamala Harris’s office, top Defense Department officials and National Security Adviser Jake Sullivan, according to a new report released Sunday by House Republicans that details the depths of the Biden administration’s failures during the last days of the U.S. mission in Afghanistan.

The fact that President Biden’s own circle had to go outside his process to get help underscores just how badly the administration planned and executed America’s retreat, concludes the report, released by Rep. Michael McCaul, the top Republican on the House Foreign Affairs Committee.

“This also underscores that planning ‘for all contingencies’ was not in fact done, no matter how many times the administration made the claim that it had done so,” the report concludes.

Monday marks one year since Afghanistan’s Western-backed government was toppled by a resurgent Taliban. The Taliban moved on Kabul as U.S. troops were pulling out, rushing to meet Mr. Biden’s Aug. 31 deadline for ending America’s 20-year, $1 trillion commitment.

With stark new findings, Mr. McCaul’s team says things were even worse than they appeared.

The evacuation started late, it miscalculated at many turns, it abandoned tens of thousands of allies who should have saved while bringing out tens of thousands of others with only the most tenuous ties to the U.S., and it may have allowed the Aug. 26 suicide bomb attack that blew up 13 American troops.

⦁ The 100 or so American citizens who the administration said were left behind and looking to get out were much lower than the actual number. Some 800 have been brought out by the State Department since Aug. 31, and that doesn’t include those rescued by private groups.

⦁ At the height of the evacuation, only 36 consular officers were working at the international airport in Kabul, creating a logjam that spilled out to the gates, where people were denied entry because of the backlog.

“This drastically limited the number of people we were able to evacuate. And it likely led to sloppy processing as officers were drastically overwhelmed,” the investigation concludes.

⦁ Afghan women involved in their country’s modernization effort had a particularly tough time trying to get to the airport, risking beatings or shootings if they weren’t accompanied by a male. Only 25% of those who did make it out were women or girls. And in the final days of the evacuation, a convoy of 1,000 women and girls circled the airport for hours in a failed attempt to get in. Less than a third have been able to escape since the U.S. troop withdrawal.

⦁ Thousands of Afghan security force members, including some highly trained commandos, fled across the border into Iran, creating a national security risk should a foreign power manage to recruit them.

The Defense Department began to compile a list of high-risk personnel who should be prioritized for evacuation, but as of February, the Pentagon still hadn’t shared the list with the State Department, the report says.

It’s a danger the Biden administration is aware of.

“Afghans who possess the knowledge specific to security operations, intelligence collection, other aspects of security and defense forces that if it were to fall into terrorists’ hands would pose a national security risk to the United States, those people will have a special category, I think there is just no way around it,” a senior State Department official said, according to the report.

The new report pinpoints one key bungle to a year ago, on Aug. 15, when the Taliban offered to let the U.S. run security of Kabul until the final withdrawal.

The offer has been reported before, and Biden administration officials said they doubted its sincerity and didn’t want to commit up to 20,000 troops they felt it would take.

“I did not consider that to be a formal offer. It was not the reason why I was there, so I did not pursue it,” former Marine Corps Gen. Kenneth F. McKenzie Jr., who led U.S. Central Command until his retirement earlier this year, told Congress last year.

Mr. McCaul’s investigators, though, gave new evidence that the Taliban’s offer was legitimate.

Zalmay Khalilzad, who was special envoy to Afghanistan from 2018 until last October and was in the Aug. 15 meeting where the offer was made, saw the offer as legitimate. He said the Taliban told the Americans “we want you to take it.”

And the new report says the 20,000-troop estimates assumed a hostile Taliban. If the Taliban did want the U.S. to run security for those weeks, the operation may have been done far more readily.

Adding to the situation, Gen. McKenzie Jr. told investigators he had intended to tell the Taliban at the Aug. 15 meeting to keep fighters outside Kabul, but he said by the time of the meeting some fighters had already entered, so he ditched that approach.

The ramifications of giving up the city for the final two weeks of the pullout were severe, the committee concluded.

U.S. forces could have set up processing centers outside the limits of the airport, eliminating the chaos of the airport perimeter that not only cost lives but fouled the selection process for who made it out.

Much of the new report is based on the Pentagon’s own review of what occurred.

House investigators said they got almost no cooperation from the State Department, which didn’t make personnel available and gave only the most cursory answers to inquiries and document requests.

The report is labeled “interim.”

Mr. McCaul’s team said they still hope to talk to the nearly three dozen State Department officials they requested. If Republicans win control of the House in November they could get more leeway to pursue the next part of their probe.