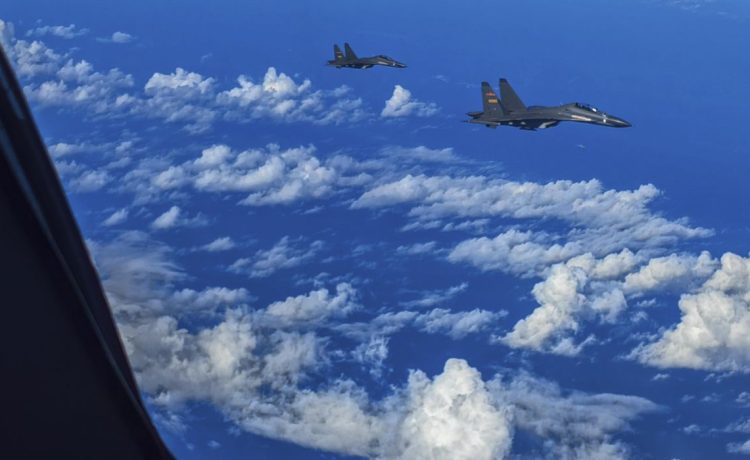 China launched naval and airpower exercises around Taiwan on Sunday, a day after officials in Beijing blasted the Biden administration for an $858 billion defense bill that authorized additional security assistance for the self-ruling island that China claims.

China blamed increased tensions that triggered the air and naval drills on “escalations of provocations” from the U.S. operating in collusion with Taiwan.

Col. Shi noted the actions Beijing is taking were a “firm response” to the actions of the U.S. and Taiwan, which it claims is working in collusion with Washington.

Officials in Taiwan said the drills showed that Beijing was destroying any hopes of regional peace while attempting to intimidate Taiwan’s people.

China’s actions “once again highlight its mentality of resolving differences by force and destroying regional peace and stability,” Taiwan’s defense ministry said, according to the Reuters news agency.

Officials in Beijing this week said the question of Taiwan’s sovereignty is an internal affair of China. A senior military spokesman said the U.S. doesn’t have the right to insert itself into the question.

“The U.S. has been constantly hollowing out and distorting the one-China principle, frequently selling arms to Taiwan, strengthening its military connection with Taiwan, and concocting Taiwan-related acts that damage China’s sovereignty,” Senior Col. Tan Kefei, a Chinese military spokesman, said in a statement.

“These moves only seriously jeopardize the peace and stability in the Taiwan Straits and increase the risk of China-U.S confrontation,” Col. Tan said.

Speaker of the House Nancy Pelosi’s visit to Taiwan in August 2022 resulted in protests from China, which quickly ordered military exercises around the island. Biden administration officials said the visit from Mrs. Pelosi wasn’t the first from a speaker of the House, a leader of an independent branch of government.

The White House accused Beijing of manufacturing a crisis out of the visit.

“Nothing about the visit changed one iota of the U.S. government’s policy toward Taiwan or China. We continue to have a ‘One China’ policy and we continue to object to any unilateral change in the status quo, whether that be from the (People’s Republic of China) or from Taiwan,” Colin Kahl, the undersecretary of Defense for Policy, said in a Pentagon press conference shortly after the speaker’s trip.