After slow start, Maryland and SMU deliver on excitement 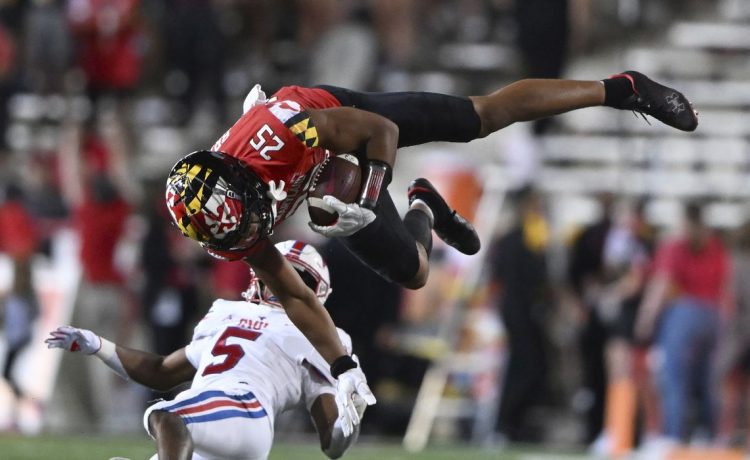 COLLEGE PARK — A 6-3 score isn’t how most expected the first quarter to end between Maryland and Southern Methodist under the lights Saturday night. Especially not when oddsmakers pegged the final total score to be 73.

But in the final game under the Capital One Field at Maryland Stadium branding, the energy and scoring — finally — picked up quickly thereafter.

SMU started hot, converting two key third downs on their first drive to get deep into Maryland territory. The Terrapins held on the third attempt at a conversion, and defensive back Gavin Gibson held up SMU receiver Jake Bailey long enough on fourth down so he couldn’t get his foot down, ending the drive.

Maryland running back Roman Hemby then nearly broke another long touchdown run this season as he went around the left side of the line, but got caught at midfield after a 49-yard gain. A false start handcuffed Maryland later, though, and they settled for a Chad Ryland 36-yard field goal to get the game’s first points.

SMU quarterback Tanner Mordecai consistently picked on Maryland cornerback Deontae Banks, who started for the injured Tarheeb Still. He beat Banks and Maryland’s double coverage on a long, 34-yard pass play, finding receiver Rashee Rice on SMU’s second drive. Those yards were part of a 7-catch, 138-yard effort for Rice in the first half.

Maryland’s defense held again, however, and a second field goal gave SMU that 6-3 first-quarter lead. The lack of touchdowns didn’t last long, as the scoring dam broke immediately in the second quarter.

On the period’s first play, Maryland scored. Not the Terrapins, but SMU tight end RJ Maryland, who got wide open in the middle of the field past linebacker Ahmad McCullough and raced to a 51-yard touchdown and a 13-3 Mustangs lead.

In the middle of the second quarter, a lethargic Terrapins offense found its rhythm thanks to its running backs — not the first time that’s been said in a young 2022 campaign.

Quarterback Taulia Tagovailoa started to feed his running backs via air and ground, with Hemby, Colby McDonald, and Antwaine Littleton all getting touches on an 11-play, 65-yard drive. It paid off with a Littleton 1-yard score, cutting the SMU lead to 13-10.

The half then changed on a dime with Maryland’s first turnover of the season.

Mordecai telegraphed a pass directly to Maryland’s Beau Brade on SMU’s next drive, which he returned 13 yards into Mustangs territory. Tagovailoa answered immediately to receiver Rakim Jarrett for 48 yards to give Maryland its first lead, 17-13.

SMU calms itself and ended the first half scoring. Mordecai slung his way down the field with crisp passing, and Austin Upshaw beat a defender on a left-side screen pass to send the Mustangs into the break up 20-17.