After Somalia hotel siege, a vow to tackle al-Shabab ‘snake’ 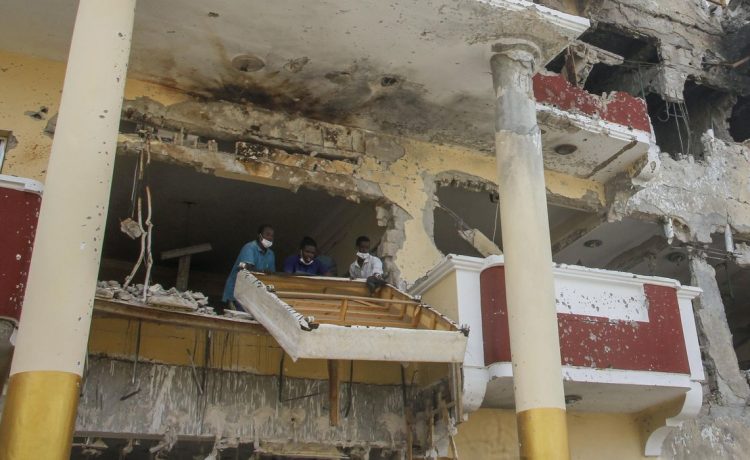 It was a Friday evening in Somalia’s capital. The patrons of the Hayat hotel had finished their latest prayers and settled in for coffee, tea or dinner. Families, businesspeople and government workers were there — some of the many who see the promise of their country rebuilding from decades of war.

Hotels are refuges in Mogadishu, but targets, too. The al-Shabab extremist group, affiliated with al Qaeda, for years has carried out complex attacks on them, starting with explosions and holding out for hours as a handful of fighters exchanges gunfire with security forces until a bloody morning end.

This time, about 35 hours followed the moment an explosion shattered the Hayat’s peace. It was the longest such attack in Somalia’s history.

Last weekend’s siege could be a turning point for the Horn of Africa nation and its quest for more security. In the days before the attack, new President Hassan Sheikh Mohamud had vowed an offensive against al-Shabab to dislodge it from the large sections of Somalia it has controlled for years.

Horrified Somalis then watched as 21 people at the Hayat were killed and some dismembered, their remains published by al-Shabab in propaganda videos.

The attack was “a window into the mindset of today’s Al-Shabab and how it has morphed into a more dark, sinister, and nihilistic movement,” the Somali Wire newsletter wrote Wednesday, noting that the hotel was not a “normal” target but “a modest hotel whose clientele were mostly ordinary people.”

In a national address this week, he spoke with new determination. Al-Shabab “is like a deadly snake in your clothes,” Mohamud said. “There is no solution other than to kill it before it kills you.”

Standing in the rubble of his hotel still marked with blood and flesh, owner Abdulkadir Mohamud Nur could barely contemplate more death.

The 60-year-old was overwhelmed as he recounted his helplessness at being a short walk from the hotel for prayers when the attack began. Calls quickly flooded his phone. A suicide bomber had detonated at a side gate, callers said, and gunmen overran security forces and shot at everyone they found.

“I couldn’t get closer to the hotel because of the exchange of gunfire,” Nur told The Associated Press.

It was chaos. One survivor, Ibrahim Bashir Ali, joined frantic hotel patrons trying to hide in the hall where afternoon coffee had been served. Amid the gunfire, he saw the attackers wearing “battle fatigues.” Al-Shabab fighters at times disguise themselves in security uniforms.

“There were hand grenades that made everyone petrified,” Ali said. He broke two windows and leaped out the second to escape, injuring himself along the way.

Nur, the hotel owner, immediately thought of his two brothers, Abdirahman and Shuaib, who had come to have lunch with him and afternoon tea. They were still inside, but he dared not call them.

“When such attacks happen, people are advised not to call those whom they think might be at the scene of an attack,” Nur said. “The ringing phone might bring the attention of the attackers.”

It was wisdom drawn from years of watching al-Shabab attacks on the capital.

Later, Nur learned from hotel colleagues that Abdirahman had been killed near the reception area while looking for a place to hide. And on the second day of the attack, he found Shuaib’s body himself.

“We trust the fate of God,” Nur said, his face pressed with grief.

The long time it took for Somali security forces to end the siege, and even communicate among themselves, has been questioned and criticized. At first, a paramilitary force trained by Turkey deployed to the hotel but was repulsed by the attackers. Then a group trained by U.S. forces arrived and managed to start rescuing survivors on the ground floor while containing the gunmen.

Somalia’s prime minister, Hamza Abdi Barre, says those who failed in their response to the attack will be punished. Security forces did not comment.

The four-story hotel, in a highly fortified area near the international airport and government offices, has been shattered. Rebuilding, like everything else in today’s global economy, would be expensive with the rising costs of construction materials.

And yet 67 employees depended on the hotel, and on its owner, a reminder of the fragility in Somalia that remains.

“I’m wondering how these people will continue their lives,” Nur said.