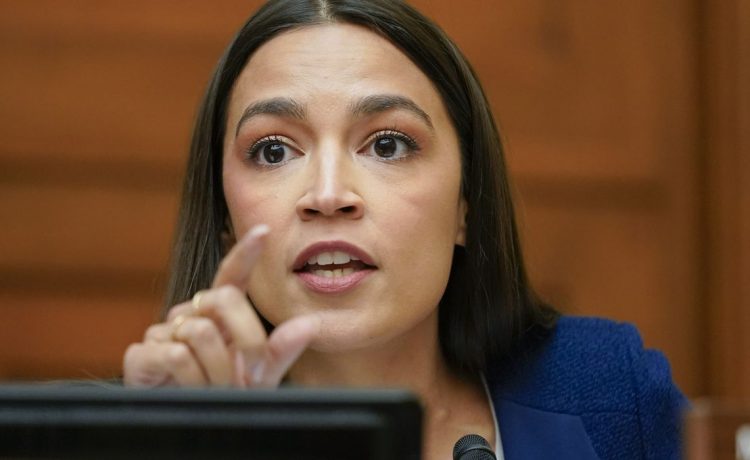 Rep. Alexandria Ocasio-Cortez danced on stage in response to hostile chants by protesters who demanded she be removed from office at a fiery town hall meeting this week in New York.

The New York Democrat, who is a member of the far-left “Squad,” was filmed facing off with several vocal opponents who heckled the congresswoman on “Big Pharma” and her support of LBGTQ rights.

“Hey, hey, ho, ho, AOC has got to go!” the protesters chanted, to which the lawmaker responded by dancing briefly on the stage in time to the chants, drinking a bottle of water.

She pointed to one man at the demonstration and responded by saying, “Very classy, thank you, sir.”

Another man tried to disrupt the event by suggesting he had to be gay to own a home.

“So if I don’t have butt sex, I don’t have a place to live,” one man said, interrupting Ms. Ocasio-Cortez discussing special LGBT centers.

“Sir, your sexual orientation has nothing to do with it,” she responded.

Another woman shouted out that she had God and yelled “F—- you all” to the attendees in the room.

“There are only two [expletive] genders,” she shouted, before being booed by the crowd. Organizers turned the lights off momentarily.

The town hall at the Boys & Girls Club in the Astoria neighborhood of Queens was the second time in recent weeks that Ms. Ocasio-Cortez was met with angry demonstrators. Last week, a group of protesters denounced her support for Ukraine in its war against Russia, citing her vote to send more weapons to Kyiv.

Ms. Ocasio-Cortez responded to questions on social media about being confronted by anti-Ukraine demonstrators by saying they were Trump supporters who were “parroting pro-Putin talking points,” a reference to Russian President Vladimir Putin.

The congresswoman is expected to easily win her reelection in her deep-blue New York City district.

The nonpartisan elections forecaster FiveThirtyEight predicted she would take about three-fourths of the vote against Republican candidate Tina Forte.