The Great Days > News > All things great and tall: Guinness notes cats and dogs — and people too
News

All things great and tall: Guinness notes cats and dogs — and people too 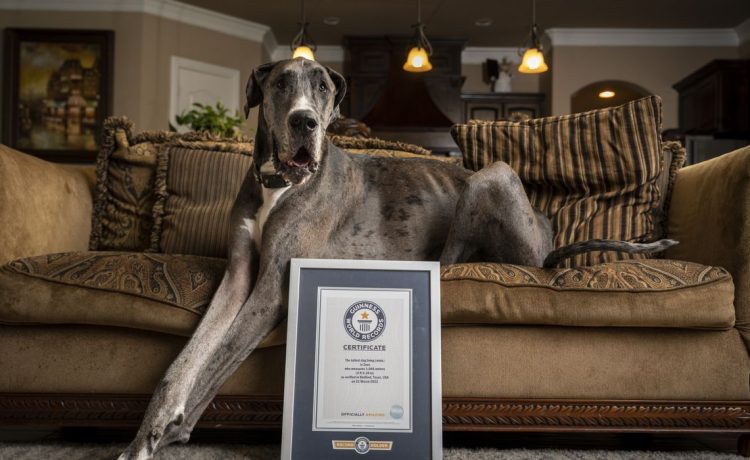 Ever mistake a dog for a horse? Brittany Davis of Bedford, Texas, says she understands such confusion about Zeus, her gray-and-brown American Great Dane.

At 2 years old — and 3 feet, 5.18 inches tall — Zeus has won the distinction of the world’s tallest living male dog, according to Guinness World Records.

“The comment that we hear most often is, ‘Wow, that’s a horse!,’ ‘Can I ride him?’ or ‘Does he have a saddle?’” Ms. Davis told the U.K.-based reference book company. “The answer to all those questions is ‘no.’”

Zeus may stand alone in the canine category, but he has company in the pets department: Fenrir, a cat in Farmington Hills, Michigan, stands at 18.83 inches tall. That’s almost the average length of a newborn human (20 inches).

Fenrir, who belongs to Dr. William John Powers, is of a breed known as a Savannah cat, which is a cross between a domestic cat and a medium-sized, large-eared wild African cat called a serval. Guinness notes Fenrir as the world’s tallest living domestic feline, and Fenrir’s deceased brother Arcturus (also owned by Dr. Powers) was the tallest domestic cat of all time, at 19.05 inches.

“People from all walks of life continue to be fascinated by extremes, and we’ve received claims from across the planet — indeed, even from space,” Craig Glenday, editor-in-chief of Guinness World Records, said in a statement.

Guinness has been in the business of tracking world records since 1955, and will confirm this year’s collection of superlatives — fastest, smallest, busiest — sometime after New Year’s Day. It says it screened 65,000 applications last year from fame hunters seeking to make their marks.

Like the Trapp family of Esko, Minnesota: They are the world’s tallest family, according to Guinness. The five members of the Trapp clan measure an average of 6 feet, 8.03 inches tall. Standing on each other’s heads, they would exceed the height of a three-story building.

“Coaches always said to us, ‘You can’t teach height. You’re either tall or you’re not,’” said Molly Trapp, who stands 6 foot 6.

The annual reference work, known in the U.S. as “The Guinness Book of World Records” through 1999, is on track to add several unusual records this year, such as Diana Armstrong of Minnesota, whose 42-foot, 10.4-inch fingernails are longer than the average school bus.

And Greg Foster, who in September set the record for the fastest time for eating 10 Carolina Reaper chilis in San Diego, California. He consumed the Carolina Reapers, which hold the record as the world’s hottest chili peppers, in 33.15 seconds.

Guinness also inducted singer Beyonce into its Hall of Fame this year after confirming her 20th record in June: most BET nominations (75) for an individual.

The reference book receives about 1,000 submissions a week from people looking to establish new records for human achievement and the extremes of the natural world. It can take a year or two for editors to confirm a claim as valid due to the volume of applications.

Perhaps the oddest benchmarks this year came from David Rush of Boise, Idaho. Guinness announced that he set his 249th record by catching the most marshmallows in his mouth within one minute, using a homemade catapult on live television.

Guinness reported that “the serial record breaker” set 52 records in 52 weeks this year, ending with the marshmallow stunt in September.

“One of the most frustrating records of the year was trying to balance toilet paper rolls on my forehead,” Mr. Rush told Guinness. “Failure after failure, stacked thousands of rolls, and then finally 101 toilet paper rolls balanced on the head for 30 seconds. It was so satisfying to finally get this one.”