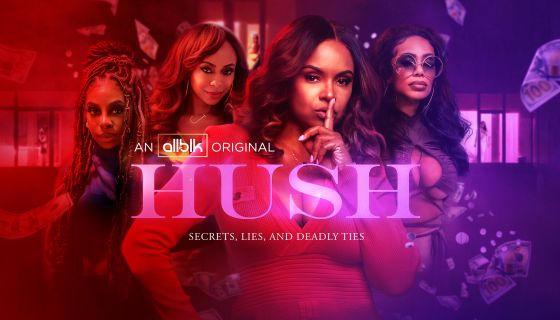 It follows the story of Dr. Draya Logan (Joyful Drake)a top marriage and sex therapist, TV personality, and best-selling author, who has built a successful practice discreetly catering to the between-the-sheets lives of her rich and famous clientele. Along with her trusted team, including her right hand and head of security, Q (Rob Gordon; The Christmas Lottery, Holiday Heartbreak), Dr. Logan is providing a handful of married women with a once-in-a-lifetime opportunity, to share a luxury penthouse for her “Penthouse Project” where they can explore their secret desires…and potentially be the subjects of her next best seller.

Unfortunately, those secrets threaten Dr. Logan’s livelihood and when a dead body is found, the police identify her as the primary suspect.

Speaking of Dr. Logan being a suspect, that’s exactly what you’ll see uncovered in episode one.

HUSH EPISODE 101 | “Like A Moth To A Flame” Exclusive Clip

In an exclusive clip for the series premiere, Dr. Logan’s looking for worse for wear while talking to a detective. The sex therapist is bruised and bloody and she’s got questions.

“Can you please tell me why you brought me all the way down here, detective?” asks Dr. Logan.

“I was hoping you could help us identify the intruder who broke into your penthouse,” answers the detective who shows Dr. Logan a picture of the intruder who the author confirms she doesn’t know.

“Why exactly do you have that penthouse, Dr. Logan?” asks the detective. “A man that you don’t know breaks into your penthouse and ends up dead.”

HUSH, an ALLBLK original series, premieres today, December 1—will YOU be watching???