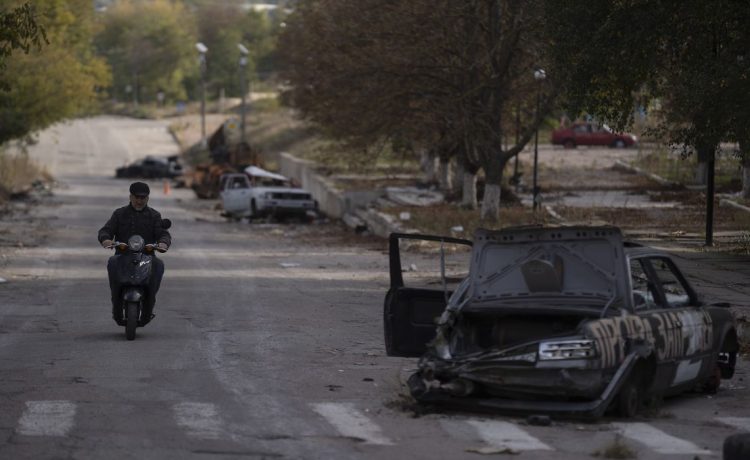 Deadly Russian missile and drone strikes on non-military targets like playgrounds and apartment buildings have pushed air defense to the top of Ukraine’s wish list of military hardware from its allies in the West.

On Wednesday, the U.S.-led Ukraine Contact Group pledged support to Kyiv both in the short term and over the long haul. Secretary of Defense Lloyd Austin noted Germany’s recent delivery of an IRIS-T air defense system to Ukraine, with more Western aid on the way.

Ukrainian Defense Minister Oleksiy Reznikov hailed the German shipments on Twitter, even as Kyiv was announcing new advances against Russian forces near the eastern city of Kherson — the first city taken by Russia in the invasion seven months ago.

“A new era of air defense has begun in Ukraine,” Mr. Reznikov tweeted. “…This is only the beginning. And we need more.”

Ukraine and its allies claimed a diplomatic win as well Wednesday as the U.N. General Assembly in New York voted 143-5 to demand  Russia immediately reverse its “attempted illegal annexation” of four Ukrainian regions. Thirty-five countries, including China, India, South Africa and Cuba, abstained, but a number of fence-sitting countries, including Saudi Arabia and Brazil, voted yes this time.

Joining Russia in opposing the measure were North Korea, Belarus, Syria and Nicaragua. It was the strongest support from the General Assembly against the Kremlin of the four resolutions it has approved since Russian troops invaded Ukraine Feb. 24, the Associated Press reported.

Moscow’s invasion of Ukraine has been built on a foundation of flawed assumptions, resulting in numerous combat failures and retaliation against civilians, Mr. Austin said.

“Russia’s latest assaults have only deepened the determination of the Ukrainian people and further united countries of goodwill from every region on earth,” Mr. Austin said. “Just look at the battlefield today and look at this room.”

The Brussels gathering was held on the sidelines of this week’s meeting of NATO defense ministers. NATO Secretary-General Jens Stoltenberg said alliance members are “steadfast in our support to Ukraine” and are prepared to continue backing them in their war against Russia “for as long as it takes.”

“We have seen the indiscriminate strikes against Ukrainian cities. We also have heard the veiled nuclear threats coming from Moscow,” Mr. Stoltenberg said. “All of this makes this the most serious escalation since February.”

Germany’s decision to ship their air defense system to Ukraine is a welcome development but more is needed to handle both short and long range attacks,” Mr. Austin said.

“Ukraine is a big country [with] many cities so we need to scale up to be able to help Ukraine defend even more cities and more territory against the horrific Russian attacks against their civilian populations,” Mr. Stoltenberg said.

General Mark Milley, chairman of the Joint Chiefs of Staff, said in Brussels that the imperative to help Ukraine defend against air attacks has become more urgent in light of recent events.

“What Ukraine is asking for, and what we think can be provided, is an integrated air missile defense system,” Gen. Milley told reporters. “So that doesn’t control all the airspace over Ukraine, but they’re designed to control priority targets that Ukraine needs to protect.”

French President Emmanuel Macron said in a television interview Wednesday night that Paris will soon deliver more cannons, radars and anti-aircraft missiles to support Ukraine.
Mr. Macron said France is working with Denmark to send an additional six howitzers cannons — which had initially been produced for the Danish military. Paris already delivered 18 similar Caesar cannons to Kyiv.
France will also send “anti-aircraft systems and missiles” to help protect the country from drone and missile attacks in the coming weeks, he said.