America braces for delayed election results that could keep Senate control a mystery for days, weeks 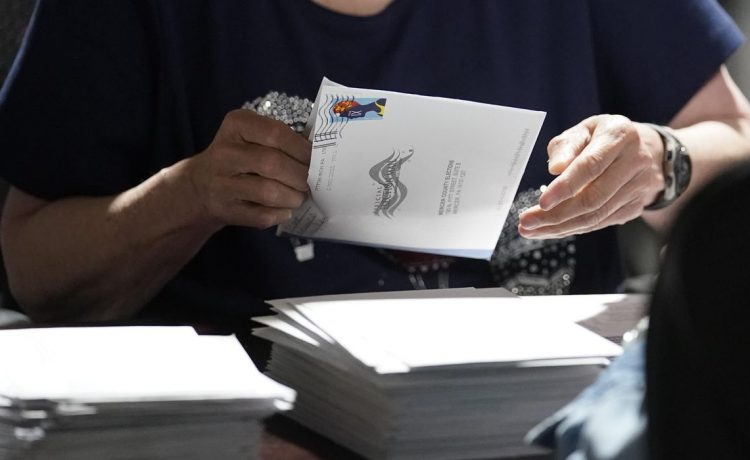 The nation will likely have to wait past Tuesday to learn the full results of the midterm election, including which party will control the U.S. Senate, because mail-in voting and other ballot processing issues in some states may postpone results.

In the battleground states of Wisconsin and Pennsylvania, where close Senate races will help determine whether Republicans win back the majority from Democrats, election workers must wait until after the polls open on Tuesday to begin counting what is expected to be a large volume of mail-in ballots, which is expected to delay final results.

In New Hampshire, where another pivotal Senate race and two competitive House races are taking place, tallying the mail-in ballots can’t begin until after polls close at 7 p.m. EDT, which could also delay determining the winners.

The results could take the longest in Georgia, Maine and Alaska, where election rules are poised to postpone results for weeks in two Senate and two close House races.

Maine and Alaska use ranked-choice voting, which means if no candidate wins more than 50% of the vote in a particular race, the ballots that chose the third-place candidates are re-tabulated with the voters’ second-choice picks. Ranked-choice re-tabulation does not take place until November 23 in Alaska and not until a week after the polls close in Maine.

The delayed results mean it may not be clear whether Alaska’s Senate Republican incumbent Lisa Murkowski has fended off a challenge from Trump-backed Kelly Tshibaka and Democrat Patricia Chesbro, or whether Republican Bruce Poliquin was able to win back the House seat he lost four years ago to Democrat Jared Golden in Maine’s 2nd Congressional District.

Georgia’s toss-up Senate race could take the longest to resolve.

Georgia is one of a handful of states Republicans hope to win in order to take back the Senate majority, but the results may not be known for a month.

Polls show Democratic incumbent Raphael Warnock tied with his Republican Challenger, Herschel Walker. The ballot includes Libertarian candidate Chase Oliver, who could draw away enough votes to deprive either Mr. Walker or Mr. Warnock of winning more than 50% of the vote. That would trigger a Dec. 6 runoff, an outcome many political analysts are predicting.

It would be a replay of the 2020 election, when control of the Senate was unknown for weeks after the November election and was ultimately decided by a Jan. 5, 2021 double runoff election in Georgia.

Delayed results are more likely to impact the Senate than the House. While analysts predict a “red wave” in the House, with a sizeable margin of victory for Republicans, the outcome is less clear for the Senate, which is now evenly divided between the two parties but controlled by Democrats because of the tie-breaking vote of Vice President Kamala Harris.

Republicans only need a net gain of one Democratic seat to take back the majority. To do that, they also need to hold on to Pennsylvania and Wisconsin, two states where results could be delayed thanks to a law prohibiting mail-in ballots from being counted ahead of Election Day.

Both states have struggled with producing results on election night.

Wisconsin’s final tally in the November 2020 presidential election was delayed into the next day as election workers scrambled to count mail-in and absentee ballots, while Pennsylvania took an additional four days to declare the winner. Turnout is expected to be lower this year, and involve fewer mail-in ballots, which could speed things along in both states.

The closer the results are, the more that the increasing use of mail-in ballots may become key to determining a winner, and those could take time to tabulate beyond Election Day.

In Nevada, which conducts elections by mail and sends a ballot to every registered voter, ballots will be counted as long as they are postmarked by Nov. 8, which means election officials could hold off declaring a winner until they are sure they’ve received ballots from everyone who voted on time.

That means it could be difficult for the state to declare a winner in the toss-up Senate race between incumbent Democrat Catherine Cortez Masto and her GOP challenger Adam Laxalt.

In Wisconsin and Georgia, ballots must arrive by Election Day but could still take longer to tally if workers operating the polls and counting ballots are overwhelmed.

“If you’re spread thin in terms of your election workers, and you have most people focused on keeping the polling places open and running, there are less resources to put towards processing mail ballots on Election Day,” said Rachel Orey, the Bipartisan Policy Center’s associate director of the Election Project.

In more than a quarter of states, the Bipartisan Policy Center reports, election officials can start counting mail-in ballots at least seven days before Election Day.

The center said providing workers with a one-week head start is considered “the gold standard,” because it makes it easier for election officials to report results more quickly and accurately on election night when Americans have become accustomed to learning results.

Twenty-six states, including Nevada and Georgia, allow processing at least a few days ahead of Election Day, but the rest do not.