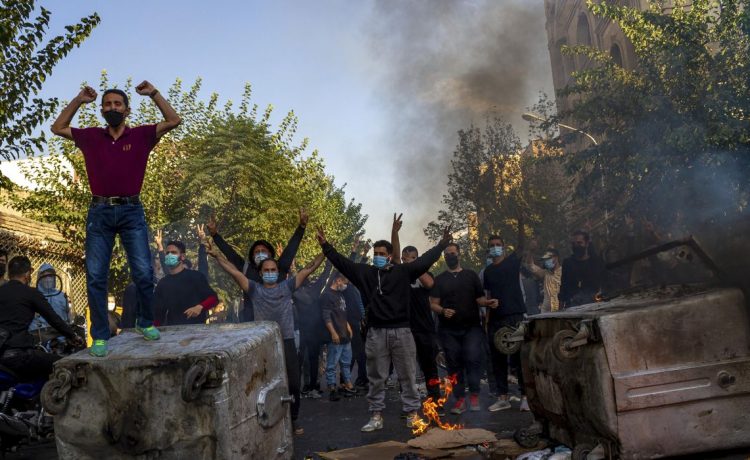 Thousands of university professors are calling on the White House to hold Tehran’s hardline regime accountable as Iranian security forces crack down on student protestors.

In a letter to President Biden this week, more than 2,000 faculty from universities throughout the U.S. urged the administration to take “urgent action” amid reports of brutal attacks and the arrest of thousands of Iranian students by regime security forces in response to widespread protests sparked by the mid-September death of Mahsa Amini.

“University students have suffered significant casualties when security forces violently crushed their peaceful protests,” the professors wrote. “We are writing to you to take urgent action to prevent such casualties and loss of life this time.”

The signatories include more than 400 Iranian-American professors.

Large-scale protests have continued to rage throughout Iran in the wake of the 22-year-old Kurdish Iranian’s death while a prisoner of Iran’s religious “morality police.”

Western governments and private rights groups accuse Tehran of a harsh crackdown in an attempt to quash the country’s largest uprising against the regime in years.

Protests have spread to more than 100 Iranian universities where students have staged sit-ins and strikes.

“In response, the regime’s security forces are brutally attacking the students on university campuses, and are killing or arresting the students and faculty members who do not remain silent over the regime’s killings,” the professors wrote in their letter to Mr. Biden.

The group commended Mr. Biden for publicly speaking out against Tehran’s response to the protests, but said “further tangible actions are needed.”

“We urgently ask that you halt any and all negotiations with the Iranian regime, and prevent any sanctions relief under any pretext, directly or indirectly, until all violators of human rights in Iran are held accountable,” the professors wrote. “We also ask you to recognize the universally accepted right of the Iranian people to self-defense as they seek to attain sovereignty and self-determination.”

The Biden administration has been mired in its push to revive the Obama-era nuclear agreement with Iran. Tehran has demanded sanctions relief to return to the deal.

Critics on both sides of the aisle have pressured Mr. Biden to abort talks with Iran to return to the deal, known as the Joint Comprehensive Plan of Action, or JCPOA, warning that the pact will not stop Iran from obtaining its long-pursued nuclear weapons capability and will further destabilize the region.

The Biden administration has only recently acknowledged that talks have all but stalled amid the regime’s crackdown on protestors and Tehran’s support for Russia’s war against Ukraine.

Administration officials say they will continue to press for a diplomatic solution to curbing Iran’s nuclear ambitions.

Former Secretary of State Mike Pompeo, who served in the Trump administration, criticized the current White House for its “relatively weak support” for the Iranian protestors.

“Even while the protests were going on for a period of time, we continue to negotiate through the Russians with the Iranians to give them a clear pathway to a nuclear weapon, and perhaps just as importantly give them a whole bunch of money to continue to inflict tyranny on their own people and terror across the world,” Mr. Pompeo said Wednesday at a Nixon Foundation seminar on the unrest in Iran.

“I pray that these protesters will be safe, that they will continue to demand the simple things that they are asking for and that this regime will change,” he said.