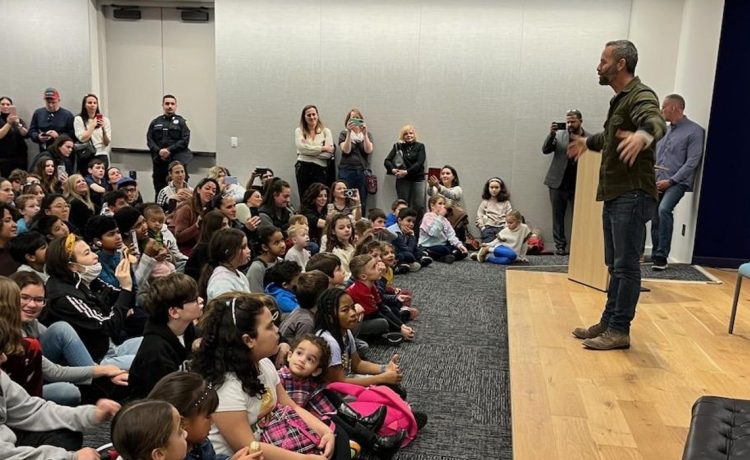 Kirk Cameron drew another overflow crowd for a reading of his Christian-themed children’s book, this time at the Scarsdale Public Library in New York.

Hundreds turned out to watch the Christian actor and former teen star read “As You Grow,” published by Brave Books, a few weeks after the library rejected his request to host the program.

“Some of you know that it was really hard for us to be able come to some libraries and read a really cool story about a tiny acorn that grows up and becomes a really big, massive oak tree, but after a little work, we got to be here,” Mr. Cameron told the crowd, as shown on Fox News Digital video.

“Some of you drove a long way to get here, and some of you took off work, and I’m really thankful that we’re here,” he said.

Mr. Cameron’s attempt to read his book at public libraries became a cultural flashpoint this month after 54 libraries either rejected or ignored offers to host the program despite previously holding Drag Queen Story Hour events.

The Scarsdale library, which sponsored in June a Drag Queen Story Hour for ages 2+, declined Brave Books’ request to sponsor a program “where we read As You Grow and speak to families about following the wisdom of the Bible, as well as discussing the harmful effects of woke ideologies.”

Instead, Brave Books paid $200 to rent a meeting room.

In a Dec. 19 statement, the library said it was prohibited from denying meeting room rentals based on subject matter.

“The Scarsdale Public Library is committed to equity, diversity, and inclusion for all community members,” said the statement. “Granting permission to use a room does not constitute an approval or endorsement of any program.”

Mr. Cameron’s “As You Grow” readings have become a big attraction. A day earlier, an overflow crowd turned out to see him at the Indianapolis Public Library.

Brave Books pegged the attendance at the Indianapolis reading at 2,500, while the library said its estimated door count was 750.

In Scarsdale, Mr. Cameron read his book twice to accommodate as many parents and children as possible, but some were still waiting outside the room when his one-hour time slot ended at 4 p.m.

The publisher asked to hold additional readings in the room, which holds 170 people, but the library refused the request, said Mr. Bell.

“At 3:45 we realized we needed to do more book readings because there were still hundreds of people inside the library patiently waiting,” Mr. Bell said. “We went to the library director and she said ‘they didn’t have enough staff’ and ‘that they were closing soon.’”

He said the library closed at 6 p.m., calling it “bogus and sad they didn’t allow us to do more.”

In addition to listening to Mr. Cameron, the crowd sang “God Bless America” at the request of one of the attendees.
Diana Baez of Peekskill said she attended because she wanted to support the values espoused by Mr. Cameron’s book.

THANK YOU SCARSDALE, NEW YORK FOLKS! Instead of 1 story hour, we had to do 2! (The Library refused to allow us to do a 3rd…)

This is an incredible showcase of what patriots, Christians and the “silent” majority can accomplish! Where should we go next for a story hour? pic.twitter.com/WN26F8pc6f

“Everything in his book and what he’s fighting for, that’s what we believe. So I just had to come here and support him,” Ms. Baez told News12 Westchester.

Another local parent, Melissa Levine of Scarsdale, wasn’t a fan.

“It’s just disguised in a cute little children’s book and that’s unfortunate because people might read it or hear it and think this is OK but it’s not,” she told the station.