As winter looms, a frozen war takes shape in Ukraine 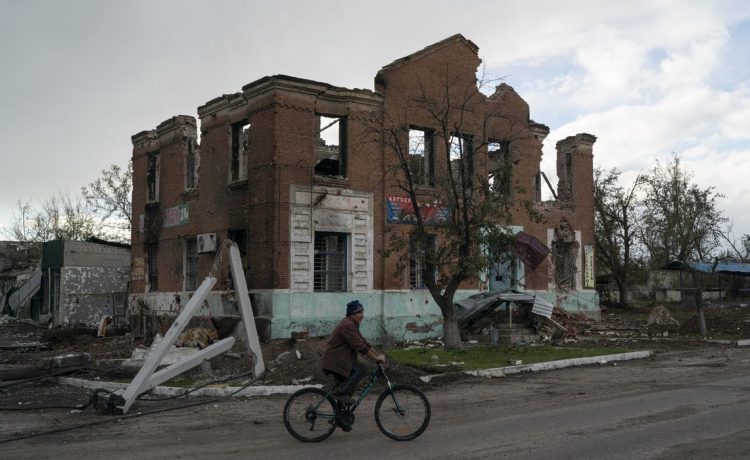 Russian President Vladimir Putin signed papers Wednesday officially “annexing” four Ukrainian provinces into Russia even as his forces face continued losses on the ground, setting the stage for what U.S. officials believe will be a long, bloody winter with both sides shooting it out on a frozen battlefield.

Mr. Putin’s claimed annexation — roundly rejected by Ukraine, the U.S., and virtually every other government on the planet — signals that the Kremlin has no intention of abandoning its territorial claims in Ukraine despite major defeats over the past two weeks by a well-coordinated, crushing Ukrainian counteroffensive. Ukrainian troops scored fresh gains in that counterattack on Wednesday, reportedly pushing Russian troops out of more villages in southern and eastern Ukraine, undercutting Moscow’s claims that the front lines have “stabilized.”

But Pentagon officials conceded this week that Kyiv’s highly effective counteroffensive campaign is about to become much more difficult as troops contend with plummeting temperatures, frigid conditions and muddy or even frozen terrain. That cold reality seems to be setting the stage for what military strategists describe as a literal and figurative “frozen conflict,” with neither side able to notch any major victories until the increasingly harsh conditions subside.

U.S. officials say that recent military aid packages to Ukraine include cold-weather gear such as gloves and uniforms specially designed for low temperatures. Still, they admit the coming months will be especially difficult for Ukraine, which could see its momentum slowed or perhaps even stopped entirely.

“Weather plays a big factor in any war. And here, what we would anticipate is … as the weather changes, maneuver will be much more challenging.” Deputy Assistant Secretary of Defense Laura K. Cooper told reporters at the Pentagon this week. “You get really muddy ground. It … increases just the challenge to the average fighter, the average soldier in terms of the impact of the weather on the conditions.”

Sen. Chris Murphy, Connecticut Democrat and member of the Senate Foreign Relations Committee, told the Financial Times this week that “the fighting season is drawing short. The Ukrainians have gained the upper hand and need to continue to press their advantage.”
Ukrainian officials say Russia is prepared to use the cold weather to its advantage, just as it did last month by targeting Ukrainian infrastructure in numerous regions of the country.

“The most likely indication of Moscow’s immediate intentions came earlier in September when Russian forces launched a series of targeted attacks against Ukraine’s civilian infrastructure. These missile strikes left much of northern and eastern Ukraine temporarily without electricity while also causing flooding in the south of the country,” said Kira Rudik, a member of Ukrainian parliament and vice president of the Alliance of Liberals and Democrats for Europe political party.

“Ukrainians are well aware of the threat posed by large-scale attacks on the country’s civilian infrastructure and are preparing accordingly,” she wrote in an analysis this week posted on the Atlantic Council’s website. “With the winter season fast approaching, [Ukraine] faces the prospect of entire regions suffering power blackouts and heating failures during periods of intense cold weather. The consequences for the civilian population could be catastrophic.”

Officials said there was urgency for Ukrainian forces to recapture territory in the south before the winter because the ground in the region has not frozen for the past three years, meaning that the terrain will soon become extremely muddy.

These conditions will make it hard for both sides to maneuver, forces trucks and heavy artillery to stay on main roads, where they will be more exposed. The mud also hands an advantage to dug-in Russian troops defending territory they already occupy, since they do not have to move across land, officials and analysts said.

Beyond its targeting of Ukrainian infrastructure, the winter season could be a blessing for Russia in other arenas. Ukraine’s ability to move troops, vehicles and equipment across the battlefield quickly could be severely diminished, potentially giving Russian troops time to reinforce their defensive front lines in the disputed Donbas region. The coming cold months will also strain the resources of Western European countries supporting Ukraine as they struggle to adjust to a cut-off of Russian oil and natural gas.

A lengthy pause in fighting also gives Russian forces more time to train, equip and deploy the 130,000 reservists President Vladimir Putin ordered to report last week, although it would also give Kyiv time to secure more arms and training from the U.S. and its Western allies.

Such a breather couldn’t come at a better time for Moscow.

Even as Mr. Putin formally announced the annexation of the Donetsk, Kherson, Zaporizhzhia and Luhansk provinces, his forces lost more ground in those same territories over the past several days. Ukrainian officials on Wednesday moved closer to the strategically vital city of Kherson in the country’s southeast. At least seven outlying villages in the Kherson provinces have been recently recaptured by Ukrainian troops, local officials said, putting Ukrainian forces just 60 miles from Kherson city itself.

Ukrainian forces reportedly pushed the Russians out of the city of Snihurivka, north of Kherson. Ukrainian military officials also claimed they had retaken several key villages in the Donetsk province, underscoring how the counteroffensive has broken through Russian lines on multiple fronts in a matter of weeks.

Foreign intelligence analysts say the recent gains have given Ukraine a new ability to hit Russian supply lines, which will be especially vital in the winter months.

“Ukrainian formations have advanced up to [12 miles] beyond the [Oskil] River into Russia’s defensive zone towards the supply node of the town of Svatove,” the British Ministry of Defense wrote in a Twitter post Wednesday. “It is highly likely that Ukraine can now strike the key Svatove-Kremina road with most of its artillery systems, further straining Russia’s ability to resupply its units in the east.”

Those developments seemingly have had little impact on Mr. Putin, who pressed ahead Wednesday with the claimed annexation of Ukrainian territory. In a video call with Russian teachers, the Russian leader said Moscow will treat all Ukrainians with respect, but he added a grim warning that his troops will “brush off” everything that keeps them from achieving their goals.

“We have three million Russian citizens of Ukrainian origin. We do not make any distinctions and are not going to make any distinctions between Russians and Ukrainians, but, while proceeding along our own constructive way, without any doubt, we will brush off everything that prevents us from moving forward,” he said, according to this country’s state-run Tass News Agency.

Mr. Putin also signed a decree Wednesday claiming Russian control over Ukraine’s Zaporizhzhia power plant, the largest nuclear facility in Europe. Russian troops have been in control of the plant since the early days of the war, but Mr. Putin’s claim will be rejected by Kyiv, the U.S. and its allies.