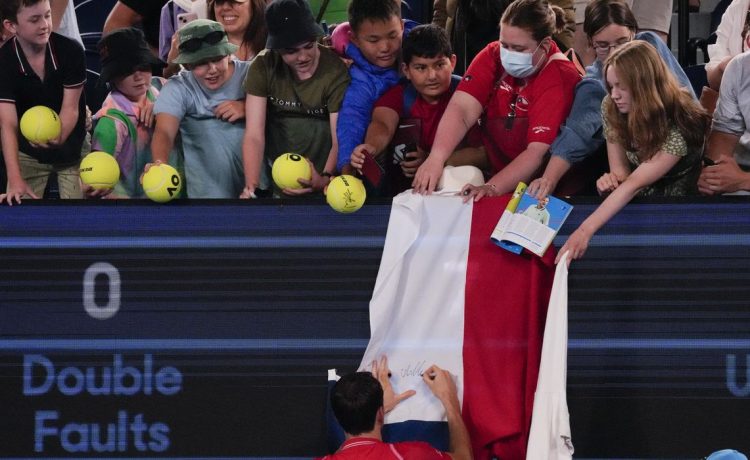 MELBOURNE, Australia — Flags from Russia and Belarus were banned from the site of the Australian Open on Tuesday after more than one was brought into the stands by spectators on Day 1 of the year’s first Grand Slam tournament.

Normally, flags can be displayed during matches at Melbourne Park. But Tennis Australia reversed that policy for the two countries involved in the invasion of Ukraine that began nearly a year ago.

“Our initial policy was that fans could bring (flags) in but could not use them to cause disruption,” Tennis Australia said in a statement on Tuesday. “Yesterday we had an incident where a flag was placed courtside. We will continue to work with the players and our fans to ensure that this is the best possible environment to enjoy the tennis.”

One Russian flag was displayed during Ukrainian player Kateryna Baindl’s 7-5, 6-7 (8), 6-1 victory over Russian player Kamilla Rakhimova on Court 14 in the first round on Monday.

Another was offered to Russian player Daniil Medvedev to autograph after his 6-0, 6-1, 6-2 win over Marcos Giron in Rod Laver Arena on Monday night.

Asked about the new flag ban, Belarusian player Aryna Sabalenka said after her first-round victory Tuesday that she would prefer that politics and sports remain separate, but understands the decision by Tennis Australia.

“I mean, if everyone feels better this way, then it’s OK,” said Sabalenka, a three-time Grand Slam semifinalist who is seeded No. 5 at Melbourne Park. “I have zero control on it. What can I say? They did it. OK. No flags? No flags.”

Sabalenka was among the athletes from Russia and Belarus who were barred from competing at Wimbledon and team events such as the Billie Jean King Cup and Davis Cup last year because of the war in Ukraine. Russia invaded, with help from Belarus, in February.

Russian and Belarusian players have been allowed to enter the other three Grand Slam tournaments but as “neutral” athletes, so their nationalities are not acknowledged on any official schedules or results for the event and their countries’ flags are not displayed on TV graphics.