The Great Days > News > Back to the future: Donald Trump revives 2016 playbook for his quest to recapture White House
News

Back to the future: Donald Trump revives 2016 playbook for his quest to recapture White House 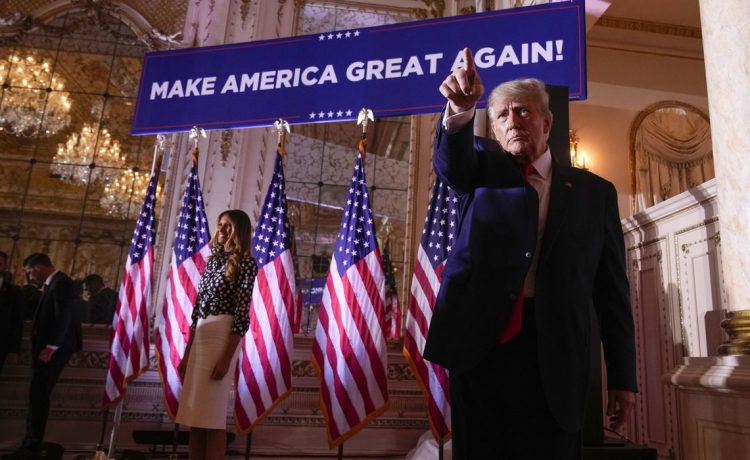 PALM BEACH, Fla. — Former President Trump pivoted away from attacks on GOP rivals and claims about a stolen 2020 election when he announced his 2024 White House bid from his Mar-a-Lago estate here on Tuesday.

His message instead harkened back to his wildly successful 2016 campaign that not only wiped out a slate of high-profile Republican opposition but delivered him to the White House.

Will the same strategy work this time?

Trump’s inner circle of advisors is betting on it. They devised a plan that pits the former president squarely against his successor, President Biden, who Mr. Trump will define as a feeble-minded octogenarian who has dragged the United States into a ditch and is too weak to lead the nation out of it.

“President Trump outlines a very strong, clear vision to get the economy back on track,” Jason Miller, a spokesman for Mr. Trump, said in explaining the 2024 strategy. “Then, you have bumbling Joe.”

The new strategy, much like the original 2016 version, faces strong headwinds from some in the Republican Party.

New Hampshire Gov. Chris Sununu, a Republican, said Mr. Trump is running from a position of “weakness” as he faces GOP grumbles and mounting legal woes.

“He’s doing it from a place of defensiveness, of his own self-opportunity and weakness,” Mr. Sununu told The Washington Post. “So he’s announcing he’s going to run for president at a low point in his political career. I don’t know how that’s going to work out, man.”

Mr. Trump’s hour-long speech Tuesday skipped any reference to a stolen election or his frequent claim that won the 2020 race and not Mr. Biden, who turns 80 on Sunday.

Mr. Trump also skipped over his list of grievances against conservative media who have soured on him. And he held back from lashing out at 2024 GOP rivals, including Florida Gov. Ron DeSantis and Virginia Gov. Glenn Youngkin, who Mr. Trump believes owe him their loyalty and should stay out of the primary to give him a clear path to the nomination.

The 76-year-old Mr. Trump mostly stuck to the bread and butter issues that first attracted voters six years ago: the economy, illegal immigration, restoring the U.S. manufacturing base and trade deals that benefit U.S. workers, farmers and businesses. His stump speech was updated with new voter concerns, including a pledge to halt transgender ideology in schools and increase parental rights in education.

The whole strategy sounds a lot like 2016 and for that reason, it should not be discounted, Republican strategist Doug Heye told The Washington Times.

“There’s an old Frank Sinatra song, ‘I’ve Heard that Song Before.’ Trump gives a bizarre speech, has no mega-donors, the Murdoch media world is split, the chattering classes are laughing, all while the media covers Trump’s every move,” Mr. Heye said. “We’ve heard this song before and should take it seriously.”

Mr. Trump’s supporters applauded the speech and urged the former president to stick with it.

“If President Trump continues this tone and delivers this message on a consistent basis, he will be hard to beat,” Sen. Lindsey Graham, South Carolina Republican and longtime Trump ally, tweeted. “His speech tonight, contrasting his policies and results against the Biden Administration, charts a winning path for him in the primaries and general election.”

The launch of Mr. Trump’s 2024 bid follows disappointing midterm election results for Republicans that some blame on the former president. Nearly all of Mr. Trump’s endorsed candidates in the most pivotal Senate and governor’s races were defeated, as were many House GOP candidates he backed.

Political strategists say both independent and Republican-leaning voters were turned off in part by the stolen election claims put forward by both Mr. Trump and some of his endorsed candidates. Mr. Trump’s drag on the ticket was worsened by highly publicized Congressional hearings blaming him for inciting the Jan. 6, 2021, riot at the Capitol and exposing his efforts to overturn the 2020 election results.

“His biggest impediment and roadblock is putting the whole Jan. 6 and ‘the election was stolen’ narrative behind him,” Stephen Stepanek, the chairman of the New Hampshire Republican Party, told The Times. “He’s just got to say, ‘That’s no longer an issue. We’re focused on 2024.’ If he can say that and put all of that behind him, then I think he can build the momentum and be successful.”

In the polls, voters have so far shown mixed feelings about another Trump White House bid and indicate they may be favoring a new GOP star.

A YouGov nationwide poll of 1,500 adults released after the election found Mr. DeSantis with a slight edge over Mr. Trump, including among Republicans. A month ago, the same poll showed Mr. Trump as the frontrunner.

Polling analyst Ron Faucheux said Mr. Trump would at least be less hobbled as a presidential candidate if he steers clear of stolen election talk and swiping at popular Republican governors.

“It helps remove an obstacle,” Mr. Faucheux, “But it’s hard to believe he won’t return to it.”