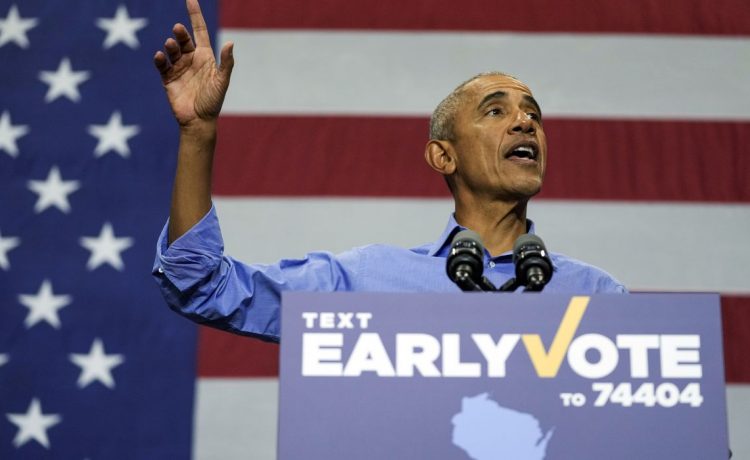 Former President Barack Obama is elbowing out his former VP on the campaign trail as Democrats feel the pinch of President Biden’s low approval in the final stretch to Election Day.

With Democrats’ chances of maintaining control in the House all but dashed, the party has little choice but to focus on key Senate and gubernatorial races in a handful of states where they hope to withstand an anticipated “red wave.”

But it’s not the current president who’s in demand in those crucial battlegrounds. With one week until the midterms, Mr. Biden is expected to steer clear of crucial Senate races in Arizona and Nevada, where Mr. Obama was called in to make the party’s closing arguments.

“What it shows is as the incumbent president he has some problems,” he said. “Biden carries negatives that Obama does not. The trick here is to get the Democratic base to turn out, and that’s part of the problem. In the states where Democrats are not doing well or should be doing better, the base is not energized. Barack Obama’s job is to energize that base.”

“Democrats have no choice,” he added. “They must win Georgia. They need to try to hold on to Nevada and Arizona.”

Over the weekend, Mr. Obama held a rally in Georgia to campaign for the party’s gubernatorial nominee, Stacy Abrams, and incumbent Sen. Raphael Warnock who is locked in a tight race with Republican Herschel Walker.

Mr. Obama then headed to Michigan to campaign for Gov. Gretchen Whitmer, whose lead against Republican challenger Tudor Dixon hangs in the balance, and Wisconsin to bolster support for Gov. Tony Evers and Senate hopeful Mandela Barnes, who are in toss-up races.

He has made several stops in the midterm battleground of Pennsylvania, where he was born and which he treats as a surrogate home state despite living in Delaware. Other than that, he’s concentrated his visits on Democratic strongholds such as New York and Maryland. On a recent swing through the West, he rallied voters in Colorado, California and Oregon, bypassing Nevada and Arizona.

He will return to Pennsylvania next weekend to campaign alongside Mr. Obama in a final push for Democratic Senate candidate John Fetterman.

The campaign schedule, which is dominated by closed-door fundraisers, underscores Mr. Biden’s unpopularity and his drag on the Democratic ticket.

Democrats face particularly stiff headwinds in the midterms from persistently high inflation and an economic outlook that grows more gloomy by the day.

The Consumer Price Index increased 0.4% in September after rising by 0.1% in August, exceeding expectations and showing that inflation remains a stubborn problem in the final monthly report before the midterm elections.

The annual inflation rate of 8.2% was down slightly from 8.3% in the previous month, though it remains a historic burden on consumers. Inflation reached a 41-year high of 9.1% in June.

Mr. Biden has pointed to the $740 billion tax-and-spending law he signed over the summer as the way out of choppy economic waters. Democrats say the law will eventually restrain inflationary pressures.

Critics pan the measure as more government spending that will add to inflation rather than reduce it. They also point to other forms of spending under the administration, such as Mr. Biden‘s plan to write off billions in student loan debt, as compounding the problem.

Mr. Biden’s message on the economy has fallen flat with voters. A recent NBC News poll showed that 71% of voters believe the nation is on the wrong track, and 57% disapprove of the president’s handling of the economy.

During recent rallies, Mr. Obama acknowledged the impact of inflation and rising crime but said there are bigger issues at play, returning to his party’s talking point that the election is a battle for democracy.

“There may be a lot of issues at stake in this election,” Mr. Obama said in Georgia. “But the basic question, fundamental question that you should be asking yourself right now is, who will fight for you? Who cares about you, who sees you, who believes in you? That’s the choice in this election.”

“Democracy is not self-executing,” he said. “It depends on us working, nurturing, caring for it not just on Election Day, but every day in between. It depends on us as citizens saying, ‘This matters!’ This election matters, Georgia.”

Mr. O’Connell said beyond Biden’s unpopularity, Democrats are continuing to turn a blind eye to the issues that matter to voters.

“Democrats don’t seem to yet understand is not only is Biden unpopular, but they’re talking about the wrong issues,” he said. “This is the ‘my money, my family’ midterm election. Democrats aren’t even really talking about those issues.”