Battle for control of U.S. Senate a tossup after Democrats’ summer rebound 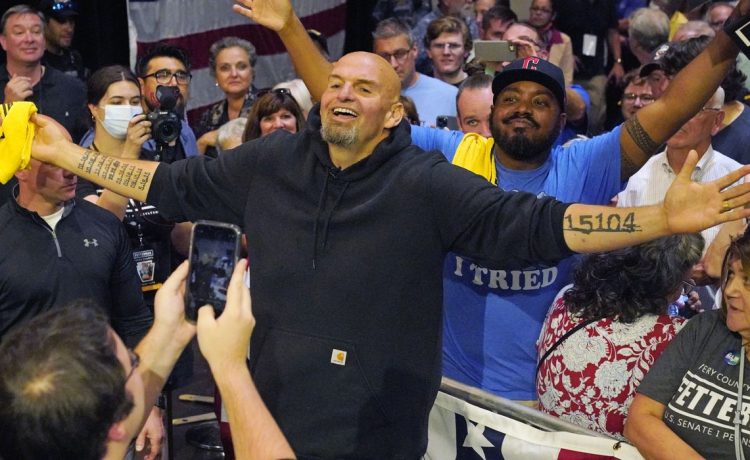 Buoyed by stronger-than-anticipated polling, solid fundraising and untested rivals, Democrats enter the post-Labor Day campaign sprint with a renewed sense of optimism about their chances of salvaging their Senate majority in the midterm elections.

Republicans are still positioned to win the House, but they are far less bullish about flipping the Senate after watching President Biden bounce back a bit and some of their candidates struggle to connect with a general election audience.

“Undoubtedly things have gotten better for Democrats,” said Jacob Rubashkin, an analyst with Inside Elections, a nonpartisan campaign tracker. “The national environment seems to have improved for the party.”

That’s the backdrop as candidates fanned out across the country this weekend to honor the American labor movement by marching in local parades, attending ball games and hobnobbing with voters at picnics.

For Democrats, major bright spots have been the Senate races in Arizona and Pennsylvania. Sen. Mark Kelly, a former astronaut, is now favored to defend his Arizona seat against Blake Masters, and Lt. Gov. John Fetterman has seized the upper hand in his race against television celebrity doctor Mehmet Oz for an open seat in Pennsylvania of retiring Sen. Pat Toomey, a Republican.

Republicans are on defense in the Wisconsin Senate race that pits Sen. Ron Johnson against Lt. Gov. Mandela Barnes. The GOP also is increasingly concerned about the Senate race in Ohio to replace retiring Republican Sen. Rob Portman between Democrat Rep. Tim Ryan and J.D. Vance, a venture capitalist and author who wrote the bestselling memoir “Hillbilly Elegy.”

A bright spot for the GOP is in Colorado where reelection prospects for Sen. Michael Bennet, a Democrat, has been downgraded thanks to a strong challenge from Republican Joe O’Dea, a political newcomer running on a traditional conservative platform of fiscal responsibility in Washington, energy independence and strong support for police and the military.

Republicans, who only need a net gain of one seat to take the Senate majority, also are in hot pursuit of pickups in Nevada and Georgia.

Democratic Sens. Catherine Cortez-Masto of Nevada, the first Latina Senator, and Raphael Warnock of Georgia are fighting for their political lives against their Republican challengers: Adam Laxalt, an ex-Nevada attorney general, and Herschel Walker, a former football star at the University of Georgia.

Mr. Walker, though, did recently blasted out an SOS to supporters, warning his campaign has pulled his ads off the airwaves “because we’re behind our fundraising budget” and financially outgunned by Mr. Warnock.

“Will you help us fund our ads so we can get them back on the air?” Mr. Walker said.

Indeed, Mr. Warnock has consistently topped Mr. Walker in fundraising. In the last quarter, which ended in June, Mr. Walker had his biggest haul yet of $6.2 million but Mr. Warnock brought in nearly three times as much: $17.2 million.

In its latest rankings, the University of Virginia’s Center for Politics shifted the Senate races in Arizona and Pennsylvania from “toss-up” to “leans Democratic” citing the weakness of GOP candidates in both states.

“Democrats, hoping to make this election more of a choice than a referendum, are benefiting from some damaged Republican candidates in several key races as well as the emergence of abortion as a key issue in the aftermath of the Supreme Court’s Dobbs decision — and perhaps also from a continued focus on a particularly visible former president, Donald Trump,” the center’s Kyle Kondik and J. Miles Coleman said in their updated rankings.

In Arizona, Mr. Masters has been on the defensive since scrubbing “I am 100% pro-life” from his campaign website, while Mr. Kelly has raised tons of money and maintained a moderate image that Republicans claim is bogus.

“Here is the thing, if you are a Senate Republican you want to be talking about jobs and the economy and how terrible Dems are, but instead, not only did he scrub his website, going from 100% pro-life to somewhere in the middle, then he did an ad trying to explain his position,” said Mike Noble of the polling firm OH Predictive Insights. “If you are explaining, you are losing.”

Mr. Kelly — who recently completed an “Arizona First” campaign swing in which he piloted a small plane to events across the state – won the 2020 special election to fill out the remainder of the term of late Republican Sen. John McCain. He holds a 6-point lead over Mr. Masters, according to the Real Clear Politics Average of recent polls, and a major advantage in fundraising.

The Senate Leadership Fund, which is aligned with Senate Minority Mitch McConnell, Kentucky Republican, pulled the plug on close to $8 million in ads that it had planned to air in Arizona this fall.

The move came soon after the super PAC announced it was pushing $28 million into the Ohio Senate race to help Mr. Vance.

In Pennsylvania, Mr. Fetterman, a 6-foot-8, goateed and tattooed progressive Democrat, has opened up a 7-point lead over Mr. Oz.

Mr. Fetterman plans to march alongside Mr. Biden in a Pittsburgh Labor Day parade and has vowed to use the occasion to press him to soften federal restrictions on marijuana.

Mr. Fetterman, who is recovering from a stroke he suffered in May, has cast Mr. Oz as a carpetbagger and out of touch with everyday people. He highlights Mr. Oz’s numerous homes and has been trolling the celebrity doctor over a post on social media about inflation driving up the cost of vegetables needed for crudite.

Mr. Oz has warned Mr. Fetterman is soft on crime, hiding from the public and scared of facing off on the debate stage. He’s also played up his health, airing an early ad showing him jogging as a way to draw a contrast with the Democrat.

Analysts say Mr. Oz is struggling to consolidate the state’s GOP base after a brutal primary race but does have the chance to cut into Mr. Fetterman’s image by highlighting his liberal positions that could turn off parts of the electorate.

“These are the two most unique personalities to seek statewide public office in Pennsylvania history,” said Terry Madonna, senior fellow for political affairs at Millersville University.

“How many times do you have a celebrity doctor who never ran for office before, who didn’t live in the state who decided to run, not for the state legislature, but the Senate of all places?” he said. “Then you have this lieutenant governor who has this unique size, and personality.”

Mr. Biden’s first slated Labor Day stop is in Milwaukee for the Milwaukee Area Labor Council’s annual Laborfest. The Barnes campaign has not said whether he will join Mr. Biden.

The GOP kicked off the election cycle well-positioned. Midterms historically are a nightmare for the sitting president’s party and a foul national mood over high inflation had Republicans salivating over the prospects of a “red tsunami.”

Mr. Biden’s approval rating turned upside down a year ago following the chaotic removal of troops from Afghanistan and things got worse for him this year. Adding to looming concerns about rising crime and unchecked illegal immigration, high gasoline prices and inflation at a 40-year-high put daily financial strain on voters.

The Republicans’ bullish red-wave talk, however, has given way to more measured talking points as summer drew to a close.

Mr. Biden’s approval rating has ticked up, though he is still underwater. The “generic” ballot question in which pollsters asked whether a voter plans to back a Democrat or a Republican in the local congressional race is split.

Democratic voters also were energized by the Supreme Court overturning Roe v Wade and kicking the abortion issue back to the states.

Pro-choice activists scored a victory in Kansas when they knocked down a referendum that would have opened the door for the state legislature to further restrict — or outright ban — abortions.

Meanwhile, gas prices have receded and some of the candidates that former President Donald Trump helped usher through competitive primaries have struggled to connect with general election audiences.

“You put all that together and Democrats are now in a position where they could conceivably expand their majority and Republicans are increasingly looking where their gains are potentially more limited than what they thought earlier in the cycle,” said Mr. Rubashkin of Inside Elections.

For his part, Mr. Biden, in a recent prime-time TV address, cast the election as a referendum on the Trump wing of the Republican Party, warning it represents a “threat to this country.”

Mr. McConnell, who is known for choosing his words wisely, sent a clear signal when he recently said “there’s probably a greater likelihood the House flips than the Senate.”

“Senate races are just different, they are statewide,” he said. “Candidate quality has a lot to do with the outcome.”

Republicans remain well-positioned to flip control of the House, though the party’s path to victory has narrowed.

“Three months ago, it looked like a Category 5 hurricane was heading for President Biden and House Democrats clinging to a flimsy 221-214 seat edge,” Dave Wasserman, of the non-partisan Cook Political Report, said in his most recent House breakdown. “Today, not only has it weakened to a tropical depression, but GOP primaries have thrown Democrats enough sandbags to give them a plausible, if still unlikely, scenario to stave off a Republican majority.”