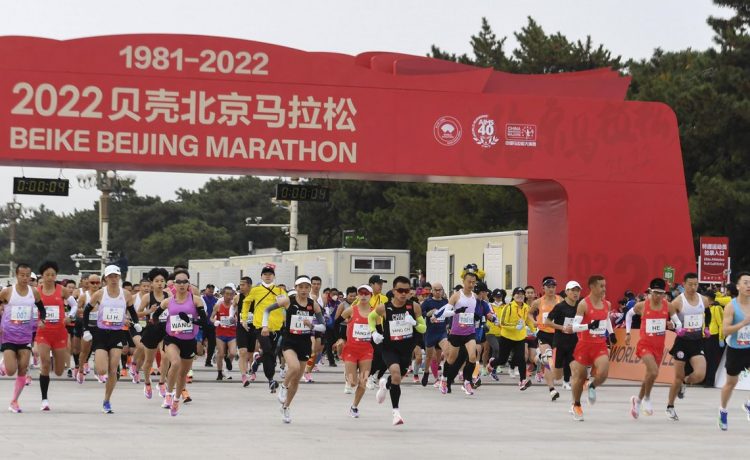 BEIJING — Thousands of runners took to the streets of China’s capital on Sunday for the return of the Beijing marathon after a two-year COVID-19 hiatus, even as another death blamed on China’s strict pandemic controls generated more public anger.

Authorities are trying to restore a sense of normalcy while sticking to a “zero-COVID” strategy that locks down neighborhoods when any virus cases are found and quarantines everyone arriving from overseas in hotels for seven to 10 days.

A simmering public frustration, which has grown as the rest of the world opens up, has been fueled by a series of tragic incidents – in several cases because people were denied timely care for non-COVID-19 medical emergencies.

An official investigation released Sunday in Hohhot, the capital of China’s Inner Mongolia region, blamed property management and community staff for not acting quickly enough to prevent the death of a 55-year-old woman in a sealed building after being told she had suicidal tendencies.

The woman fell from her 12th floor apartment on Friday evening, according to the report, which the Inner Mongolia Daily newspaper published on its social media account.

Public outrage over her death and her adult daughter’s frantic attempts to get help earlier and then get out of the barricaded building immediately afterward prompted the investigation. The building had been locked down after two COVID-19 cases were found about 10 days ago.

The woman’s death followed that of a 3-year-old boy earlier last week from a gas leak at his locked-down residential compound in the city of Lanzhou in northwestern China.

In contrast, the mood was upbeat at the Beijing marathon. Participation was limited to city residents, apart from some invited runners. China’s state media said that 30,000 people took part. They had to be vaccinated, not leave Beijing for seven days before the event and show proof of a negative virus test in the previous 24 hours.

Marathons are also planned later this month in Shanghai and Chengdu, a major city in southwestern China.

The number of new cases recorded nationwide rose to 4,200 on Saturday. About 1,400 were in southern China’s Guangdong province, where a locked-down district in Guangzhou city was testing all 1.8 million residents this weekend. Another 700 were in Inner Mongolia.

The zero-COVID strategy has kept the death toll low compared to other major countries – 5,226 by the official count – and most people can move about relatively freely within their cities with little chance of contracting COVID-19.

But lockdowns of residential complexes and even larger areas can happen anytime, with little or no warning. All the visitors to Shanghai Disney had to remain in the park to get tested when it was suddenly closed under anti-virus regulations last week.

There is also the inconvenience of having to get a throat swab test every few days to be allowed to enter office buildings, shopping malls and other public places. And people who leave Beijing risk not being allowed to return for a week if an outbreak occurs where they traveled to.

“Since the outbreak of the epidemic, although we have made every effort to protect the lives, health and safety of the people, such unfortunate incidents still occurred,” concluded the investigation into the death of the woman who fell from her apartment in Inner Mongolia. “We will draw a profound lesson from this incident.”