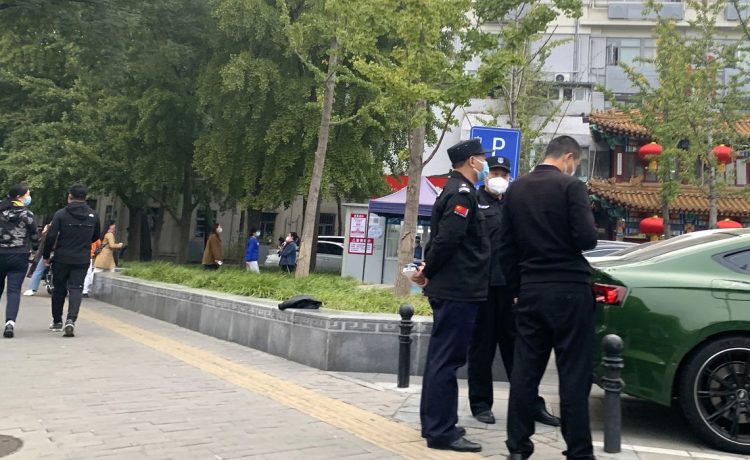 Two banners were unfurled over a highway bridge, with one stating in Chinese characters, “Depose the Traitorous Dictator Xi Jinping,” before police removed it, according to videos from China circulating on social media posts.

A second banner suggested the protest was a response to Mr. Xi’s highly restrictive “zero-COVID” policies, which have led to forced quarantines and lockdowns in major cities across the country. The banner stated: “We Don’t Want Nucleic Acid Tests, We Want Food; We Want Freedom, Not Lockdowns. We Want Votes, Not Leaders; We Want Dignity, Not Lies; We are Citizens, not Slaves.”

Images of the protest banners were posted on Twitter.

The protest comes as the ruling Communist Party prepares to hold a weeklong meeting starting Sunday during which Mr. Xi is expected to be granted an unprecedented third five-year term as secretary general and chairman of the party’s Central Military Commission.

New members of the CCP Politburo Standing Committee, the seven-member collective executive body that rules China, also are expected to be announced at the conference.

Even as Mr. Xi moves to cement his hold on power, China is facing mounting problems from COVID outbreaks, tensions over Taiwan and a slowing economy.

Security in the capital has been tightened in preparation for the meeting that is held every five years. Police arrived around the highway overpass where smoke from the scene was visible and quickly removed the banners.

The protest took place on the Sitong Bridge near a subway station in the Haidian district of the capital, which is reportedly the location of several major universities and technology firms.

Internet searches in China using the word “Sitong Bridge,” “Haidian District” and “Beijing” were censored on the Chinese internet, the Wall Street Journal reported from Beijing.

The Chinese social media outlet Weibo, similar to Twitter, showed an increase in searches for details on the protest.

Public protests are very rare in China as the government has made any opposition to the Chinese Communist Party and its leaders a crime punishable by imprisonment. The government also has installed a high-technology surveillance system capable of identifying faces in crowds and comparing them with a database.

The last major protests in China took place in June 1989, when thousands of pro-democracy protesters camped out in Beijing’s Tiananmen Square and were forcibly attacked by Chinese military forces using tanks and armored vehicles and troops with automatic weapons.

Details on the protests could not be learned, including the identities of those involved.

Over 2,000 government officials and party delegates are expected in Beijing for the weeklong 20th Party Congress, which has meant stepped-up security and police presence in addition to the existing COVID-related restrictions.

There are reports that the security presence on the capital’s streets has been significantly beefed up, with paramilitary police patrolling subway stations and districts near the Great Hall of the People where the deliberations will take place.