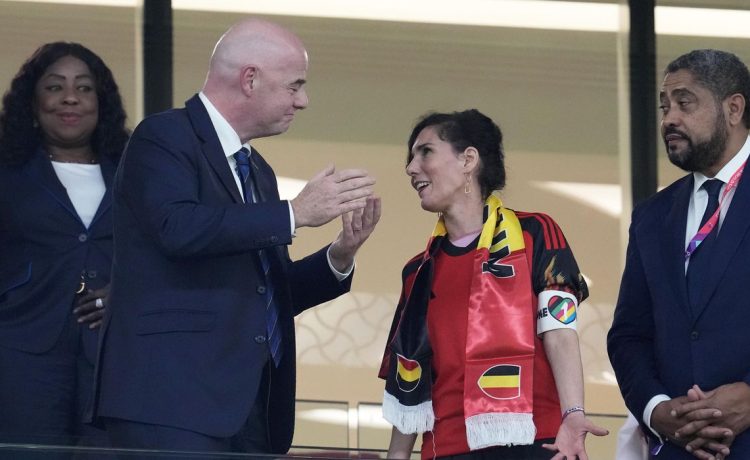 AL RAYYAN, Qatar — Belgium’s foreign minister wore a “One Love” armband when she met with FIFA president Gianni Infantino at her country’s World Cup match against Canada on Wednesday.

Hadja Lahbib was pictured wearing the colorful armband – regarded as a symbol for inclusion and diversity – that FIFA has prevented captains of seven European teams, including Belgium, from wearing at the World Cup in Qatar.

They wanted to wear it as a rebuke to host nation Qatar’s human rights record.

Lahbib posted a photo of herself on Twitter wearing the band on her left arm, writing: “My heart goes out to our Red Devils!”

FIFA warned the seven European federations that players would be penalized if they wore the armband.

Germany’s players covered their mouths for their team photo before their opening World Cup match, a 2-1 loss to Japan, to protest against FIFA’s clampdown on the “One Love” armband.

“It was a sign from the team, from us,” Germany coach Hansi Flick said, “that FIFA is muzzling us.”

German Interior Minister Nancy Faeser, who is also responsible for sports, also wore a “One Love” armband in the stands for her country’s match, sitting beside Infantino. Faeser posted a photo of herself wearing it with the hashtag #OneLove.