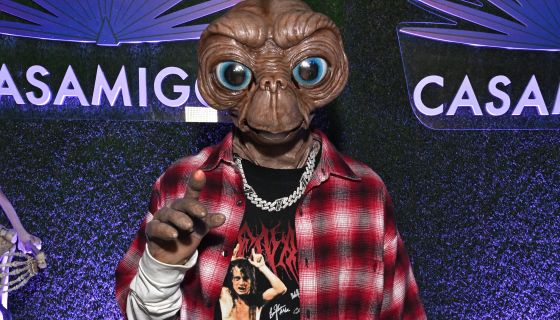 So far, we’ve seen some eye-catching costumes from celebs and regular-shmegulars across social media who went ALL OUT with their viral looks.

THEY ATE THIS SO BAD. pic.twitter.com/CqwWgBawr0

At this very moment, Diddy’s Joker appears to winning Halloween followed closely by Kerry Washington’s Lionel Richie, Tyga‘s ET, and the Kardashian kids with more amazing costumes on the way.

It’s going to be a glorious night!! Hahahaha @tylerthecreator 🃏🖕🏿🎃 pic.twitter.com/LXFXr45kiF

Our girl Lizzo gave us multiple costumes that included her transforming into Chrisean Rock which caused a stir online.

In her post, Lizzo recreated a viral clip from Rock’s time on South Central Baddies, reciting her famous line: “I don’t know who to slap.”

Fans in the comments loved the costume that, naturally, attracted seas of haters who brought up Lizzo’s body in comparison to Chrisean’s while attempting to make a point about fat suits.

“Now when Chrisean come back in a fat suit… remember how y’all was laughing in these comments,” someone tweeted in response to Lizzo’s costume.

Moments later, Chrisean responded to the costume with her approval, commenting, “Awwwwwwwww I love dis.”

“I hope she put on a fat suit” 🤡🤡🤡 GTFOH pic.twitter.com/5FinJme5Yg

What’s your fave Halloween costume you’ve seen this weekend? Tell us down below and peep the absolute BEST costumes (so far) on the flip.