Best of CES 2023: Canine communication and a calming pillow 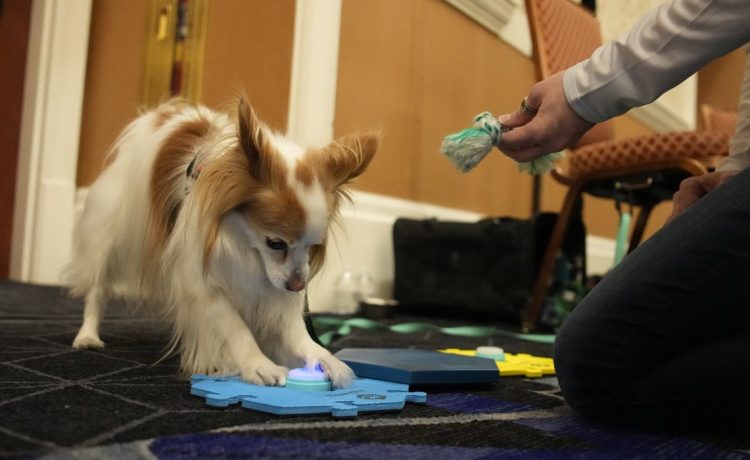 LAS VEGAS (AP) — Tech companies are showing off their latest products this week at CES, formerly known as the Consumer Electronics Show.

The show officially opened Thursday, with crowds of investors, media and tech workers streaming into cavernous Las Vegas venues to see the latest tech from big companies and startups alike.

Here are some highlights:

Have you ever wondered what your dog would say if it could speak to you?

FluentPet promises the next best thing — buttons the company says you can train your pet to push if it’s hungry, needs to go outside or wants to play.

The buttons come in a hexagon-shaped plastic mat called a hextile. Hextiles can be connected to each other to form a bigger collection of buttons.

“We find that actually when dogs kind of know that they’re being understood because they have the precision and specificity of the buttons, then they complain less because they’re no longer wondering whether they actually communicated what they wanted to,” said Leo Trottier, FluentPet CEO.

At CES, the company announced FluentPet Connect, a new app that notifies owners when their dog presses a button and collects data on how the buttons are used.

Fluent Pet’s starter kit comes with hextiles, a speaker and six buttons for $159.95. The app does not require a subscription.

Canadian startup Gluxkind’s smart stroller is designed to make life easier for parents on the go.

The AI-powered stroller has a sensor that can tell when you’ve picked up a fussy baby, at which point it will roll in front of you while you walk without you having to touch it.

When the baby is in the stroller, you need to keep your hands on it, but the battery will help propel it, making it easier to push uphill. It stops automatically if it gets too far away from whoever is pushing it. It can also rock a baby back and forth.

The battery lasts for about eight hours and takes two to four hours to charge.

“I looked into the stroller market and were really surprised that we didn’t find anything that has some kind of level of automation or motorization present,” said Anne Hunger, who co-founded the company with husband Kevin Huang after their daughter was born in 2020.

The company is currently taking pre-orders for the stroller and hopes to deliver them beginning in July. Prices start at $3,300.

The soft, fluffy pillow gently expands and contracts, vibrating as you hold it against your stomach. The idea is that you’ll breathe more slowly and deeply as your breath starts to synch with the movement of the pillow.

It was developed based on research done at the University of Tokyo.

Yukai CEO Shunsuke Aoki said the pillow can help remote workers who struggle to switch off from their jobs.

The version on display at CES is a prototype. The company is looking for partners and hopes to start producing it this year.

Unveiled by toy maker WowWee, Dog-E has more than a million possible combinations of lights, sounds and personality traits.

Dog-E begins as a blank canvas and develops its personality as you set it up.

The app-connected toy has audio sensors to hear sounds, touch sensors on its sides and body, and a tail that you can program to display lighted icons and messages when it wags.

Jessica Kalichman from WowWee says it’s a good option for those who can’t commit to owning a real pup, or perhaps for those with allergies.

“I do think for anyone that’s either not ready to have a dog yet, this is a great test to take care of it, learn to feed it, nurture it, and really have that trial run for a family,” she said.

WowWee expects to have Dog-E in stores in September. It will sell for $79. The app to control the toy’s movements does not require a subscription.

If you want a treadmill but don’t have much space, WalkingPad offers a solution — a lightweight treadmill that can be folded in two when not in use and stored against a wall or under a bed.

WalkingPad reaches speeds of 7.5 mph (12 kph). It also includes a detachable phone or tablet holder and tracks your exercises in a free app. Its creators envision it helping remote workers stay fit at home.

An early version of WalkingPad went viral on TikTok as influencers added it to videos about their daily work-at-home routines.