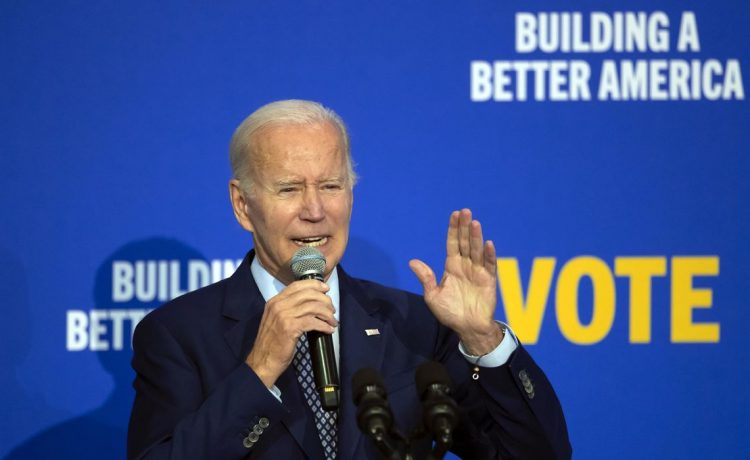 President Biden will head to New York over the weekend as part of his final push for Democrats ahead of the midterms, as Republicans put up a fight for governor in the liberal-leaning state.

The White House on Friday announced that Mr. Biden will visit deep-blue Westchester County on Sunday to round out his tour.

The president set out for his final roadshow earlier this week, an itinerary taking him to New Mexico, California and Illinois before he returns to his stomping grounds in Pennsylvania on Saturday.

Mr. Biden will attend a “Get Out the Vote” event in Yonkers for New York Democratic Gov. Kathy Hochul, who is facing a tighter-than-expected race against Republican challenger Rep. Lee Zeldin.

Mr. Biden has returned to New York several times ahead of the midterms, to tout investments in upstate semiconductor manufacturing facilities spurred by the $280 billion science and technology spending bill that he signed into law last summer.

Despite kicking off his roadshow with a swing out west, the unpopular president is noticeably steering clear of battlegrounds Arizona and Nevada, where Democrats face tight Senate races that could decide which party holds the majority in the next Congress.

On Thursday, Mr. Biden touted his embattled plan to write off billions in student loans debt while in New Mexico. He is expected to laud additional technology investments spurred under his administration while in California and Illinois.

On Saturday the president will stump for John Fetterman, the Democratic candidate in Pennsylvania’s race for U.S. Senate.

Mr. Fetterman, who is in a tight, closely watched race against Republican Mehmet Oz, has come under increasing scrutiny since a stroke left him with auditory processing issues and raised questions about his ability to hold office.

On Monday, Mr. Biden will hold a rally for Democrats in Columbia, Maryland — a stone’s throw from the White House — to give his final pitch in a deep-blue state before voters head to the polls.