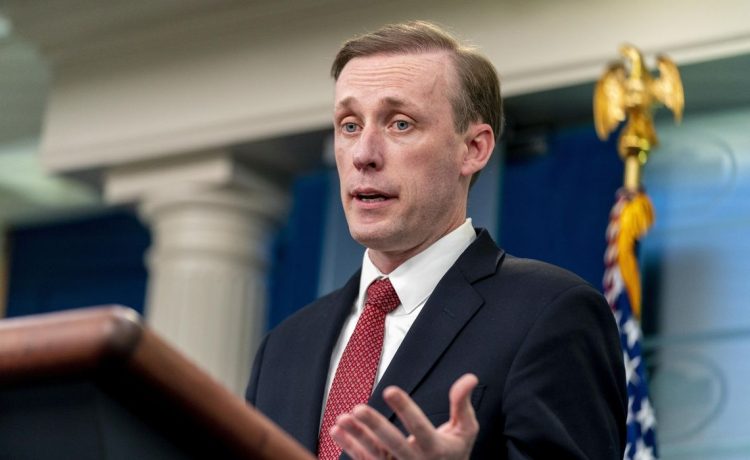 The Biden administration is planning to bolster U.S. arms production to sustain the war in Ukraine and to support Taiwan in preparing to fend off a future Russian-style invasion from China, White House National Security Adviser Jake Sullivan said Friday.

Mr. Sullivan also said the administration is urging Taiwan’s political and military leaders to purchase arms better suited to fighting the Chinese military if it were to launch an invasion of the democratically ruled island.

Due to the need to produce more weapons faster, the Pentagon is working on ways to increase the capacity of the American defense industrial base, as well as allied defense industries, to make sure weapons and other military equipment can be produced to deter adversaries, he said.

The weaponry Mr. Sullivan said he has studied in recent months includes all types of artillery, coastal defenses and naval mines.

The United States so far has sent more than $5.6 billion in weapons and other security aid to Ukraine’s military forces, including anti-tank and anti-aircraft missiles and sophisticated artillery.

The aid shipments are raising questions about whether U.S. military stocks can be replenished, and whether similar arms would be available if needed to assist Taiwan should China decide to use military force against the island.

“There are longer-term questions about ensuring that the American industrial base and our allies’ defense industrial base can be put in a position to sustain the kind of security assistance that we are going to need to keep supplying Ukraine, as well as Taiwan — as well as ourselves — to ensure that we are maintaining a proper level of deterrence,” Mr. Sullivan said in remarks to the Aspen Security Forum, a major annual conference in Colorado.

Strengthening the ability to produce more weapons will require increased investment, a larger industrial workforce, and a new emphasis on supply chains that provide components for maintaining weapons systems, especially munitions, he said.

Deputy Defense Secretary Kathleen Hicks is heading up the effort.

“We’ve got a good strategy and we’re working it,” Mr. Sullivan said.

The White House adviser said there is some overlap between the kinds of weapons being sent to Ukraine and what Taiwan would need against a Chinese military assault.

“There are also some big differences because of the nature of the contingency; the conflict can be quite different from land war in Europe, and a potential contingency across the Taiwan Strait,” Mr. Sullivan said.

Mr. Sullivan also said the administration “accelerated dramatically” previous administrations’ efforts to provide Taiwan with more asymmetric warfare capabilities that would lend themselves to Ukrainian-style defense of the island, located about 100 miles off the southern coast of China.

The so-called “porcupine strategy” will supply arms and other military forces “that are going to be most useful in the kinds of contingencies we can expect,” he said.

Precision-strike HIMARS artillery was sent to Ukraine, although the 190-mile-range Army Tactical Missile System (ATACMS) were denied to the Ukrainians as too escalatory.

Additional shoulder-fired Stinger anti-aircraft missiles, and Harpoon anti-ship weaponry also could be sent to Taiwan as part of the new strategy.

One troubling lesson for China is that Beijing may not be deterred from attacking Taiwan because they will see the faults of the Russian military operation and say “how do we do it better,” Mr. Sullivan said, adding that he is not predicting an invasion of the island.

Mr. Sullivan said Taiwan also is studying the war. “They are learning lessons about citizen mobilization and they are working rapidly at that,” he said.

Should Ukraine prevail and ultimately win the war against Russia, the success could help deter China from its goal of taking over Taiwan.

Chinese President Xi Jinping has said retaking Taiwan, which broke from the mainland in a civil war between communists and nationalists, is a high priority.

“I do think that part of our objective in Ukraine has to be able to show strength, resilience, staying power, candidness, capability, because that will have some impact on our ability to effectively deter others elsewhere,” Mr. Sullivan said.

The policy of “strategic ambiguity” regarding whether Beijing or Taipei is the sole government of Taiwan has kept peace and stability across the strait and therefore should be kept in place, he said.

The national security adviser outlined the administration’s policy toward China which involves investing in U.S. strengths, aligning with allies and competing in all areas – military, economic, technological and soft power.

However, the strategy calls for not allowing competition to “drift or trip into conflict or a new Cold War,” Mr. Sullivan said.

“That is how we try to approach things,” he said. “I believe that we have hit our marks in terms of what we set out to do.”

Informationally, the administration is attempting to dispel the Chinese propaganda narrative in Asia and elsewhere that China inevitably will surpass the United States as the world’s most powerful nation and that U.S. decline is inevitable.

“It’s never a good bet to bet against the United States of America,” Mr. Sullivan said.

China, for its part, is struggling economically and is failing in its draconian zero-COVID policy aimed at stemming outbreaks of the disease.

“I think there are real questions about what [China’s] trajectory is going forward and that is something countries both near and far from China are having to factor in,” he said.