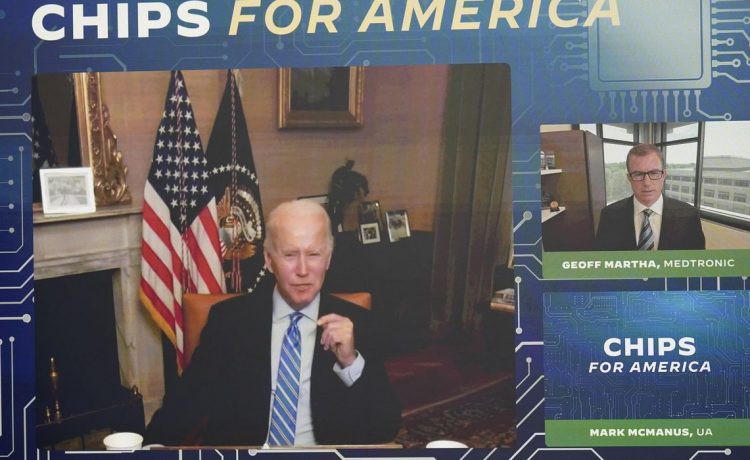 President Biden on Monday pleaded with Congress to pass a $52 billion payout to semiconductor manufacturers as lawmakers face a make-or-break week to get the bill across the finish line.

The White House has, for weeks, been in a full-court press to get the measure passed, urging lawmakers to shed a bevy of tough-on-China measures to get the broadly supported CHIPS Act to his desk before industry heavyweights take their money elsewhere.

“Congress must pass this bill as soon as possible,” Mr. Biden said Monday during a virtual roundtable with CEOs and cabinet leaders who spoke of the economic and national security imperative of getting the bill through.

“Listen to the business leaders here today and across the country,” he said. “They’re making decisions right now about where to invest and ramp up production of these semiconductors. Are they going to investing China, India, Japan, South Korea, the European Union? The United States has to lead the world in the production of these chips.”

Known as “Chips-plus,” the bipartisan bill includes more than $50 billion over the next five years for chip manufacturing and a 25% tax credit through 2026 for new chip production.

Proponents of the bill say it will reduce America’s dependence on China and resolve a major supply chain issue that has contributed to high inflation. Opponents, including some Republicans and far-left icon Sen. Bernie Sanders of Vermont, labeled as “corporate welfare” the bill’s $50 billion of funding for the chip manufacturing industry.

The bill also includes money for science-focused measures, such as funding for the National Science Foundation, Commerce Department and the Energy Office of Science.

Time is running out for Congress to deliver a microchip win for Mr. Biden. The House is scheduled to leave for its August vacation at the end of the week, and the Senate is expected to recess soon after that.

Commerce Secretary Gina Raimondo, who led classified briefings this month on Capitol Hill to drive home the national security imperative for domestic chip production, warns the U.S. is running out of time to woo chip manufacturers to its shores as other countries begin to rollout similar incentives.

Ms. Raimondo said Monday that the chips funding will be the “deciding factor” on where companies decide to expand.

Senate Democrats postponed Monday’s scheduled test vote on the bill and are expected to hold the vote Tuesday. They blamed the delay on storms that prevented some senators from jetting into Washington on Monday.

The bill needs to get 60 votes to survive.

It was expected to clear that hurdle despite the chamber’s 50-50 split between the parties and the absence of Sen. Joe Manchin III, West Virginia Democrat, who announced Monday that he tested positive for COVID-19.

The bipartisan support for the bill was demonstrated last week in a 64-34 vote to tee up the bill.

The expected passage will cap off months of tense negotiations over partisan differences that nearly derailed the legislation altogether and deliver a modest win to a White House and Democrats hungry for any sort of legislative victory ahead of the Nov. 8 midterm elections.

“This is about investing in the United States of America, in our workers in our economy, and in our national security,” Ms. Raimondo said. “We need Congress to act.”