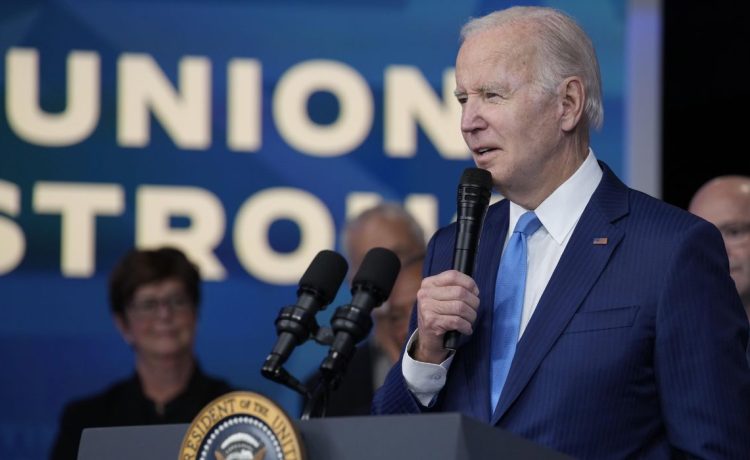 President Biden returned to his “Union Joe” roots last week when he swooped in with a $36 billion bailout for the Teamsters’ ailing pension fund.

The money for the Central States Pension Fund is the largest amount of federal dollars ever used to bail out a pension plan. It comes out of the $86 billion in taxpayer money allocated to faltering pension plans in Mr. Biden’s $1.9 trillion COVID-19 relief package last year.

Mr. Biden said the payout will ensure 350,000 union workers and retirees can collect benefits through at least 2051. Without the bailout, the fund would have had to cut benefits by as much as 60%, according to the White House.

“Thanks to today’s announcement, tens of thousands of union workers in states like Ohio, Michigan, Texas, Wisconsin, and Missouri, can go to bed tonight knowing the pension they worked so damn hard for is there for them when they need it,” Mr. Biden said.

“Imagine losing half of that pension or more through no fault of your own,” he continued. “You did your part. You paid in. Imagine what it does financially, to your peace of mind. What it does to your dignity because you count on not having anybody to retire.”

“Once again Biden is paying back his Big Labor allies to the detriment of taxpayers and the 90% of American workers who have chosen not to affiliate with a union,” he said. “Long before COVID, union officials have been mismanaging plans like the Teamsters Central States fund, which makes it especially offensive that the pandemic has been used as the excuse for this bailout.”

Mr. Mix said the payout “virtually guarantees that taxpayers will be asked to pay even more bailout such plans in the future.”

Mr. Biden recently angered freight railroad unions by signing legislation that blocked a nationwide strike. The deal he imposed on the unions and railroad companies included one day of paid sick leave, a provision that prompted four unions to vote down the agreement.

Mr. Biden didn’t address his spat with the labor unions during a White House ceremony to announce the bailout. He was flanked by Labor Secretary Marty Walsh, AFL-CIO President Liz Shuler and Teamsters workers and retirees.

Mr. Biden heaped praise on unions as the “backbone of America.”

The Central States Pension Fund has $7.4 billion in assets, according to its most recent quarterly financial report. It is spending more than $2 billion per year more than it is taking in from contributions.

Like other strained pension funds, Central States has been plagued with a variety of problems. Rising costs, a weaker stock market, and a drop in the number of active workers participating in the fund have crippled its revenue.

It is not the only pension fund struggling as union membership declines. Other pension plans have warned they will run out of money soon.

A report by the Pension Benefit Guarantee Corporation (PBGC) found that out of roughly 1,400 insured multi-employer pension plans, 124 have reported that they will run out of money within 20 years. Those 124 pension plans represent about 1 million workers.

As plans become insolvent, they apply to the PBGC, a government organization to protect the plans. But the multi-employer program was in bad shape and faced the likelihood of insolvency in 2026 and a “near certainty” of insolvency by 2027 due to the cost of covering pension failures.

In a gift to unions, Biden included the $86 billion bailout fund in his $1.9 trillion COVID-19 relief package last year.

Under the measure, pension plans can apply for federal grant funding, which would be used to pay retirement benefits to workers. Multi-employer plan sponsors can apply for the aid through 2025, and the funds must be invested in investment-grade bonds.