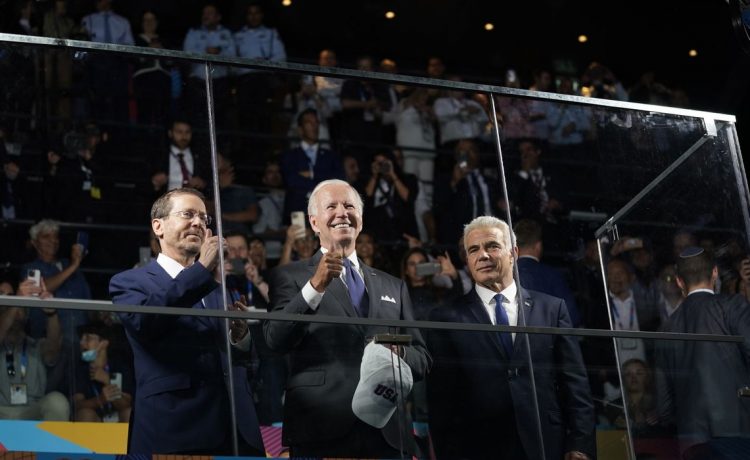 President Biden spent much of the second day of his high-stakes Middle Eastern trip on the defensive, scrambling Thursday to explain his decision to visit Saudi Arabia and his insistence on reviving the Iran nuclear deal as he took heat from Israeli Prime Minister Yair Lapid and journalists.

A brief joint press conference in Jerusalem with Mr. Lapid laid bare the two countries’ contrasting approaches to Iran’s nuclear ambitions, with the Israeli leader openly lecturing Mr. Biden on the need to get tougher on Tehran.

It also underscored Mr. Biden’s about-face on Saudi Arabia, a country he once vowed to make a “pariah” over its human-rights record and the 2018 murder of journalist Jamal Khashoggi.

Mr. Biden will travel on Friday to Saudi Arabia, where he will hold a bilateral meeting with Saudi King Salman and Crown Prince Mohammed bin Salman, who is the kingdom’s de facto ruler. U.S. intelligence has accused the crown prince of orchestrating the murder of Khashoggi, but he has denied any involvement.

The decision to meet with MBS has spurred bipartisan criticism from U.S. lawmakers. Mr. Biden defended the meeting but stopped short of saying whether he would raise directly the issue of Khashoggi’s murder.

“I always bring up human rights, but my position on Khashoggi has been so clear if anyone doesn’t understand it in Saudi Arabia or otherwise, they haven’t been around me for a while,” Mr. Biden told reporters.

The president emphasized that his reasons for visiting Saudi Arabia were “much broader,” saying the kingdom is necessary to stabilize the violent Middle East and to limit Russian or Chinese influence.

“The reason I’m going to Saudi Arabia is to promote U.S. interests in a way that I think we have an opportunity to reassert our influence in the Middle East,” he said.

Mr. Biden also said freezing out oil-rich Saudi America hurts American influence at a time when the U.S. is plagued by record high gas prices and struggling to push back global aggression from Moscow and Beijing.

“There are so many issues at stake, I want to make sure that we can continue to lead the region and not create a vacuum, a vacuum that is filled by both Russia and China,” he said.

“[Mr. Biden’s] going to be meeting with the Saudi princes, begging them to produce more oil when we can produce it here,” said Rep. Steve Scalise, Louisiana Republican. “If oil is made anywhere in the world, the best place to make it and produce it is in America. We should be doing more of it.”

Mr. Biden also took flak from the families of 9/11 victims, who worry Mr. Biden will agree to keep concealed documents that they say show the Saudi government’s ties to the Sept. 11, 2001 terror attacks in exchange for a deal on oil or Middle East peace. They have fought for 20 years to gain access to the documents for a civil lawsuit against the kingdom’s leaders.

“Our biggest fear is that President Biden uses the 9/11 families and use these documents as a chip or trade us as part of a larger deal to help bring down the cost of oil or convince the Saudis to stop carpet bombing Yemen,” Brett Eagleson, whose father Bruce was among the World Trade Center victims, said in an interview with The Washington Times.

Mr. Biden also faced pushback from Mr. Lapid, Israel’s caretaker prime minister, on his plan to revive the 2015 nuclear agreement with Iran to slow its ability to acquire a nuclear weapon.

While Mr. Biden insisted diplomacy is the path to dealing with Iran, Mr. Lapid called on the U.S. to take a more aggressive course. In his remarks, Mr. Lapid threatened a military response.

“The only thing that will stop Iran is knowing that if they continue to develop their nuclear program, the free world will use force,” Mr. Lapid said. “The only way to stop them is to put a credible military threat on the table.”

The president listened attentively to Mr. Lapid’s remarks, but did not respond directly and never made a commitment to use force.

Critics argue that a return to the Obama-era deal would be a mistake, given Iran’s increasingly bellicose stance and its recent strides toward a nuclear weapon.

Mr. Lapid’s remarks accompanied the signing of a joint declaration between the U.S. and Israel emphasizing military cooperation to prevent Iran from obtaining a nuclear weapon.

“The Iranian regime must know that if they continue to deceive the world, they will pay a heavy price,” Mr. Lapid said.

The Biden administration has been mired in months of stalled negotiations aimed at returning to an Obama-era nuclear deal with Iran.

Mr. Biden would not give a deadline to reach a deal but warned the rogue Islamic nation that the U.S. “won’t wait around forever.”

Western officials have insisted that time is running out for a deal between Iran and world powers. Earlier this week, France’s foreign minister said there were only a few weeks left to revive the nuclear deal, but the Biden administration pushed back on setting a definitive timeline.

White House National Security Adviser Jake Sullivan said earlier this week that the U.S. has “not marked a date on the calendar.”

Mr. Biden’s patience for long-term diplomacy with Iran has met with some resistance. Jim Carafano, The Heritage Foundation’s vice president of foreign policy and national security, urged the president to put “maximum pressure” on Tehran and keep Trump-era sanctions in place.

“Lifting these sanctions in exchange for short-term restrictions on Iran’s uranium-enrichment program will put money in the regime’s pockets that it will undoubtedly use for destructive purposes, just as it did following the 2015 deal. Biden’s pathetic embrace of failed agreements that enrich and empower our adversaries shows that he is a president to be taken advantage of,” he said.