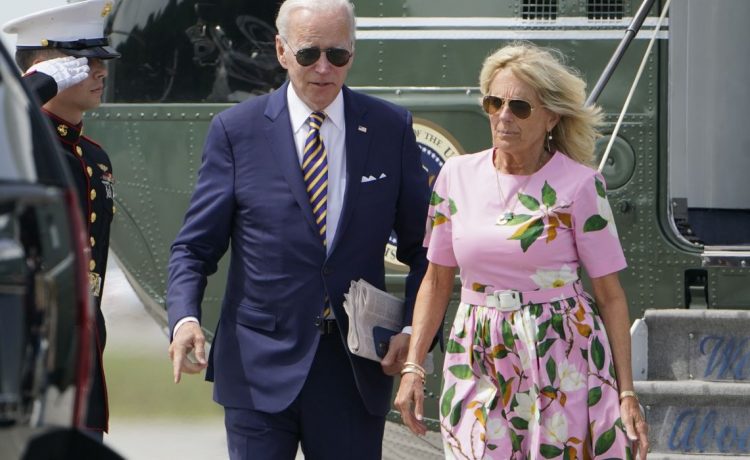 August vacations are a presidential tradition, but efforts to enjoy much-needed downtime have frequently been upended by political and foreign crises.

President Biden kicked off his summer vacation after a string of legislative and foreign policy victories. He’ll enjoy a seven-day stay with his family at Kiawah Island, South Carolina, a private beach and golf resort.

The president is hoping this vacation goes better than the one last year, which he had to cut short and return to the White House to address his administration’s bungled withdrawal from Afghanistan.

Republicans seized on Mr. Biden enjoying rest and relaxing at Camp David while Afghanistan descended into chaos. His poll numbers still haven’t recovered from the Afghanistan debacle and criticism that was absent during the crisis.

Even brief getaways have turned into a public relations nightmare for Mr. Biden, who was widely mocked after he fell off his bike during a mini-vacation at a Delaware beach.

“Mostly presidential vacations have a negative effect,” said Robert Rowland, who teaches presidential rhetoric at the University of Kansas. “It can reinforce a narrative that a president is elitist, uncaring, or not a leader.”

This time, Republicans slammed Mr. Biden for going on vacation while Americans struggle with soaring inflation that raised the prices of gas, food, and other household items.

“Joe Biden is out-of-office and out-of-touch – Biden thinks he is entitled to another undeserved vacation while Americans cannot escape the historic inflation, recession, and high gas prices he created. Because of Joe Biden’s failures, voters will send Democrats packing in November,” the Republican National Committee said of Mr. Biden’s vacation.

The White House has not provided details of Mr. Biden’s vacation schedule or if any activities are meetings or planned. In the past, the White House has emphasized that Mr. Biden is never truly free from the job’s responsibilities and will continue to stay in contact with aides and receive his daily national security briefing.

He also starts his vacation with the most successful streak of his presidency. Congress passed three pieces of legislation he championed, including a package of new gun laws, expanded benefits for veterans exposed to toxic burn pits and spending to boost computer chip manufacturing in the U.S. Gas prices are dropping, albeit slowly, and the U.S. killed the head of Al-Qaeda with a drone strike in Afghanistan.

“It does blunt criticism of Biden taking a vacation, but if something goes south he still needs to react immediately,” Mr. Rowland said of Mr. Biden’s winning streak. “The big thing is you don’t want to screw up the visual. For his age, Biden is quite a vigorous man, but putting him on a bike is an entirely bad idea.”

Several of Mr. Biden’s predecessors have had legacy-defining blunders while on vacation.

President George W. Bush was vacationing at his Texas ranch when Hurricane Katrina made landfall in August 2005. He was widely panned for surveying the damage from Air Force One two days later. Mr. Bush would later call that decision a “huge mistake,” and his presidency never recovered.

In 1979, President Carter claimed he saw a giant rabbit while enjoying a fishing vacation. His staff did not believe the story, and the media mocked it.

The incident became fodder for Republicans to label Mr. Carter’s administration as hapless and inept. He lost his reelection bid.

“If the president is running an unsuccessful presidency, their vacations are unsuccessful. It becomes another excuse to be against him. If things are going well, the American people don’t mind,” said Craig Shirley, a presidential historian who has authored books on the presidency.

Even if a president can avoid vacation blunders, at times it seems as if their time away is cursed. President Obama had a string of vacations interrupted by crises ranging from a terrorist attempt to blow up an airplane bound for Detroit to having to cut a vacation short to negotiate a budget agreement with lawmakers.

In 1983, President Regan ended a vacation early after the Soviet Union shot down a Korean Airlines flight and President Clinton returned to the White House in 1998 to order missile strikes in response to the bombings of U.S. embassies in Kenya and Tanzania.