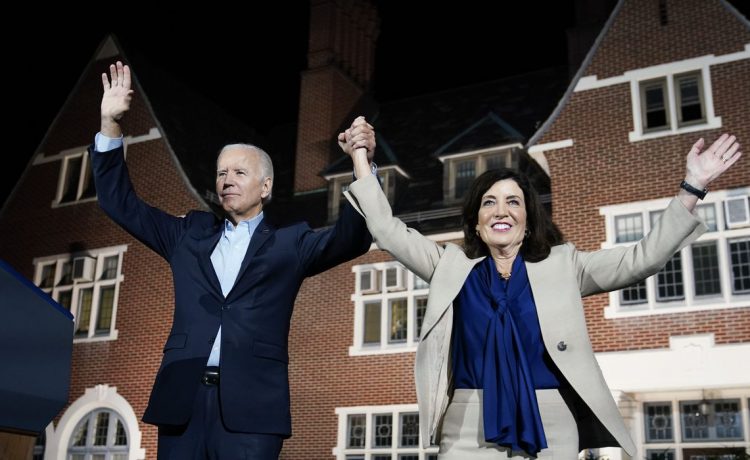 YONKERS, New York — President Biden joined Gov. Kathy Hochul and other New York Democratic luminaries Sunday at Sarah Lawrence College in a final effort to encourage their party’s voters to come out to the polls before Election Day on Tuesday.

He praised Mrs. Hochul for New York’s gun-control laws and her response to a mass shooting in Buffalo earlier in the year.

“Gov. Hochul and I were together at Buffalo. I visited every mass shooting site in the weeks after that senselees evil mass shooting,” he said. “We met with the families … you could feel the anger and disgust would have been easy to feel helpless.”

“There are more than 300 Republican candidates for state, local and federal office who are election deniers who say that I did not win the election even though the hundreds of attempts to challenge and have all failed,” he said. “Kathy Hochul’s opponent is one of those election deniers.”

Mrs. Hochul is facing a surprisingly close race against the Republican challenger. A recent internal Hochul campaign poll had her leading Mr. Zeldin but with less than 50% of the vote, a bad sign for an incumbent, Democratic consultant briefed on the results told Politico.

She is now getting back up from several high-profile Democrats, including Bill and Hillary Clinton and Vice President Kamala Harris, as she faces accusations of being soft on crime while the state, particularly New York City, is facing a crime crisis.

He implored the crowd that despite New York being a liberal state, Republicans were animated this cycle and Democrats should not be complacent.

“Too many people think, ‘Oh, don’t worry, I don’t have to vote. Hochul’s gonna win. Everyone’s gonna win.’ But you’ve got a lot of people on the other side,” he said. “If you watch the right-wing media, they’ve made up these lies, like the election was stolen … and they’re motivated to vote.”

Rep. Jamaal Bowman accused “tens of millions” of Americans of not accepting the results of the 2020 election, and of wanting a civil war and a fascist country.

“We have one message for the Republican Party. Stop lying. I was sworn in on Jan. 3, 2021. Three days later, there was an insurrection,” Mr. Bowman said.

“There are tens of millions of people in our country who believed the election was stolen, and are threatening to go to civil war to keep their country,” he said. “They don’t care about democracy. They care about fascism.”

Sarah Lawrence students told The Washington Times that their main concerns this campaign cycle were abortion rights and LGBTQ curriculum being allowed to be taught in schools.

However, there was not a lot of enthusiasm on campus to vote in this year’s governor’s election.

“No one’s really active politically. A lot of people are very interested in local elections,” said Daniel, a freshman. “But I feel like there’s a defeatist attitude with national races.”

Magdalena, a first-year student, said that “from what I’ve seen in my peers, there’s not a lot of enthusiasm, but there is an understanding that voting is important.”

Democrats in New York have been scrambling last minute to defend their political turf across the deep-blue state and did not expect that Mrs. Hochul was in danger of being defeated.

The last time New York had a Republican governor was in 2006 when Gov. George Pataki held office, and Republicans believe the state is ready for another GOP executive.

New York, like many states across the country, is facing a crime wave, and Mrs. Hochul supported her party leadership in passing cashless bail and law enforcement restrictions in 2019.

Although she attempted to roll back some of the cashless bail law, her own party blocked her and only minor changes were made.

Mrs. Hochul touted this change she made at the only debate she and Mr. Zeldin had but got pummeled by him for not firing Manhattan District Attorney Alvin Bragg over his failure to prosecute violent criminals and repeat offenders.