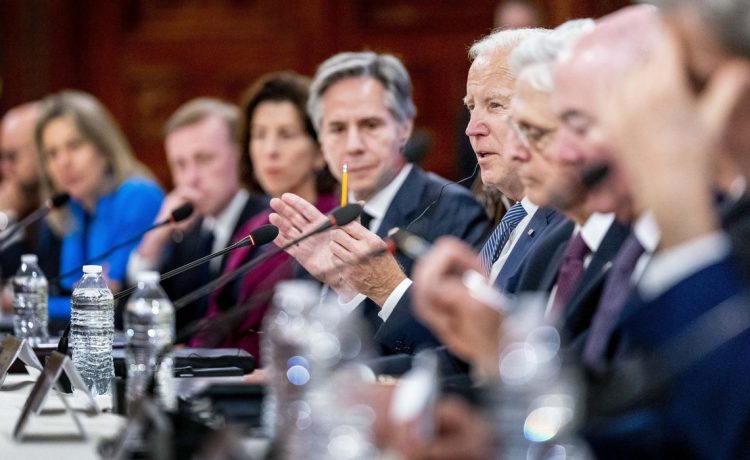 President Biden kicked off a North American summit Monday by calling on leaders to bolster democracies in the Americas after a weekend attack on Brazil’s seat of government that some are comparing to the Jan. 6 attack on the U.S. Capitol.

“We have to continue to build and contribute to democratic institutions in the hemisphere,” Mr. Biden told Mexican President Andres Manuel Lopez Obrador and assembled Cabinet members at the start of bilateral talks in Mexico City.

“We’re at one of those inflection points, where what we do in the next several years is going to determine what the world looks like in the next two, three, four decades,” Mr. Biden said.

Mr. Biden has made the preservation of democracies a cornerstone of his presidency, and his comments to Mr. Lopez Obrador come one day after protesters stormed government offices in Brasilia in support of former President Jair Bolsonaro, who was voted out of office months ago.

Mr. Biden said the North American summit, which will include Canadian Prime Minister Justin Trudeau and stretch into Tuesday, will also focus on migration, trade and the “plague” of deadly fentanyl coming across the U.S.-Mexico border.

Mr. Lopez Obrador greeted Mr. Biden and first lady Jill Biden with pomp and circumstance to kick off the summit in the courtyard of ehe National Palace.

Mr. Biden and Mrs. Biden stood on a raised platform with Mr. Lopez Obrador and his wife, Beatriz Gutierrez Muller, while a uniformed band played the national anthems of both countries under the flags of the U.S., Mexico and Canada.

The two leaders shared a warm handshake and the first ladies offered welcoming remarks before Mrs. Biden pulled the quartet together for a group hug.

National Security Adviser Jake Sullivan told reporters Monday that Mr. Biden plans to focus on ways North American manufacturers can bolster their economies while reducing their “dependencies on other countries and other parts of the world who don’t necessarily share the same values that we share with our partners here in North America.”

Mr. Biden and Mr. Lopez Obrador will also debate how to handle an influx of migrants who are streaming into the U.S. from Mexico, and the flow of fentanyl that is killing thousands of unsuspecting drug users.