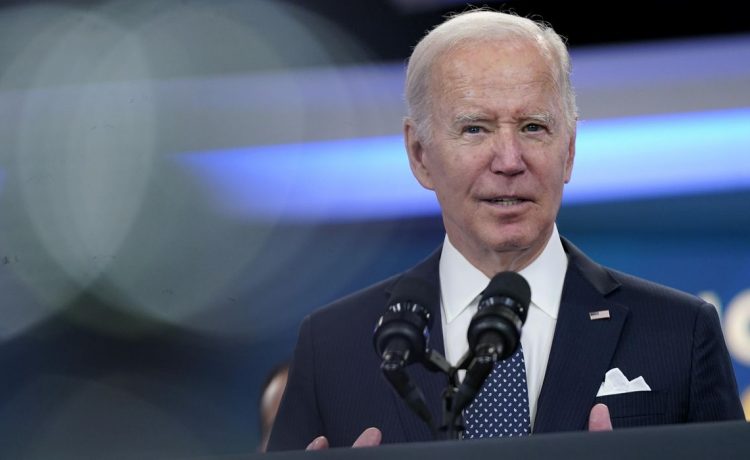 President Biden on Wednesday said he appreciates Americans’ frustrations with skyrocketing prices while he struggles to get inflation under control, and he warned that it will take time before families get back to breaking even.

Speaking from the White House at an event unveiling new Consumer Financial Protection Bureau crackdowns on banking fees, Mr. Biden attempted to level with average families who continue to feel the squeeze from high gas prices and grocery bills that are becoming more out of reach.

“I’m optimistic,” he said. “It’s going to take some time. I appreciate the frustration of the American people.”

“One of the things that I think frustrates the American people, is they know that the world is in a bit of disarray. They know that Putin’s war has imposed an awful lot of strains on Europe and the rest of the world and the United States,” he said. “They want to know what are we doing.”

“There’s a lot going on that we’re doing,” the president said. “And it adds up.”

That view contrasts with polls showing most U.S. adults think Mr. Biden is not focusing enough on the issues that matter most, and the most prominent of those issues is inflation.

A Monmouth University poll published last week found that only 31% of respondents think Mr. Biden “has been giving enough attention to issues that are most important to American families.”

A 63% majority of respondents said they wish the president would focus more on top issues: inflation, elections and voting, crime and immigration.

The number of people who point to inflation as extremely important jumped from 37% in September to 46% in the poll this month.

The same poll found that Mr. Biden’s approval rating remains underwater with 40% of respondents approving of his overall job performance while 53% saying they disapprove.

Mr. Biden’s walloping in the polls has coincided with persistent inflation figures and gloomy economic forecasts throughout his tenure in office.

“We also know that as our economy has come roaring back, we’ve seen some price increases,” Biden said in remarks on July 19, 2021. “Some folks have raised worries that this could be a sign of persistent inflation. But that’s not our view. Our experts believe and the data shows that most of the price increases we’ve seen are – were expected and expected to be temporary.”

The Consumer Price Index increased 0.4% in September after rising by 0.1% in August, exceeding expectations and showing that inflation remains a stubborn problem in the final monthly report before the midterm elections.

“Americans are squeezed by the cost of living: That’s been true for years, and they didn’t need today’s report to tell them that,” Mr. Biden said of the CPI report, which was the last major inflation numbers voters will see before the Nov. 8 elections.

He said the Labor Department figures show “some progress in the fight against higher prices,” noting that annual inflation has slowed compared to the prior quarter.

The annual inflation rate of 8.2% was down slightly from 8.3% in the previous month, though it remains a burden on consumers. Inflation reached a 41-year high of 9.1% in June.

“But even with this progress, prices are still too high,” he said. “Fighting the global inflation that is affecting countries around the world and working families here at home is my top priority.”

Mr. Biden has pointed to the $740 billion tax-and-spending law he signed over the summer as the way out of choppy economic waters. Democrats say the law will eventually restrain inflationary pressures.

Critics pan the measure as more government spending that will add to inflation rather than reduce it. Critics also point to other forms of spending under the administration, such as Mr. Biden‘s plan to write off billions in student loan debt, as compounding the problem.

Mr. Biden has also focused on fees he says companies use to nickel and dime consumers.

At the event Wednesday, the president took aim at “junk fees” that banks charge customers for bounced checks and overdrafts, which he said may not be a windfall for individual families but will add up over time.

“These are billions of dollars,” he said. “It doesn’t add up to billions for billions for the individual, but it adds up to two, three, four hundred bucks for average families.”

“A lot of you come from backgrounds like I came from,” he said. “We’re not poor, just regular folks. But that matters. It matters in your life.”