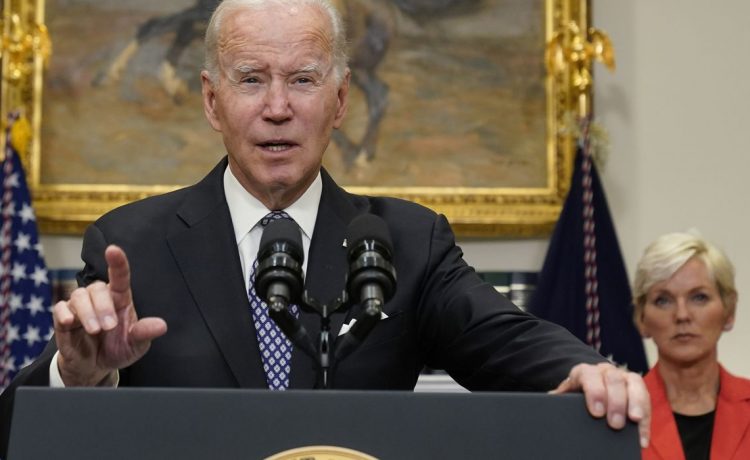 A week before the midterm elections and a threatened shellacking for Democrats, President Biden proposed a windfall tax on oil and gas companies to give the appearance of doing something on skyrocketing energy prices.

Just days earlier, Mr. Biden was hit with desperate pleas for help from Democratic lawmakers in the Northeast where rising home heating costs are making it harder to fend off a Republican wave in the Nov. 8 elections.

Citing oil company profits that are “so high it’s hard to believe,” Mr. Biden said unless the oil companies lower prices and increase production in the U.S., he’ll work to impose a windfall tax on “excess profits” and impose other restrictions.

“Their profits are a windfall of war,” Mr. Biden said. “The windfall from the brutal conflict that is ravaging Ukraine and hurting tens of millions of people around the globe. You know, at a time of war, any company receiving historic windfall profits like this has a responsibility to act beyond the narrow self-interest of its executives and shareholders.”

Mr. Biden’s proposal faces nearly impossible hurdles in Congress and is unlikely to be implemented but follows dire warnings about energy shortages in New England and a new threat that diesel fuel is also becoming scarce in some areas of the country, which could threaten trucking and supply chains.

The looming energy crisis has significant political implications: Many of the places most impacted by rising energy costs and supply issues are in battleground states, including Georgia, New Hampshire, Connecticut, Rhode Island, Maine and Virginia where Republicans have been gaining ground in their quest to retake the majorities in the House and Senate.

In New Hampshire, where recent polls show Republican challengers are closing in on incumbent Democratic Reps. Chris Pappas and Ann Kuster as well as Democratic Sen. Maggie Hassan, residents are coping with a dramatic increase in energy bills, while gas station owners are having trouble securing diesel fuel.

The state’s huge contingent of unaffiliated voters, who outnumber Republicans and Democrats, are breaking slightly for the GOP according to the latest polling.

The energy crisis, combined with other sour economic news is “having a huge impact” on the three races, said state GOP Chairman Stephen Stepanek.

Some residents have already seen their electricity bills climb nearly 150% over last year, while a tank of propane has tripled in cost.

Biden’s windfall tax threat follows a letter sent to him by the New England delegation in Congress, which lacks any GOP representation aside from Sen. Susan Collins of Maine.

The letter, which Ms. Collins didn’t sign, urged President Biden to release stockpiles from the Northeast Home Heating Oil Reserve. The Democratic lawmakers blamed a drop in supply and rising prices on Russia’s war in Ukraine, the COVID-19 pandemic and an active hurricane season.

“Families should not be forced to make hard choices about keeping loved ones warm and healthy and putting food on the table,” the group wrote. “We stand ready to work with you and your administration to take the steps necessary to shore up New England’s supply of heating oil so that families throughout our states are not faced with this impossible choice.”

Republicans on the campaign trail have been hammering Democrats on gas and energy costs, blaming the party’s anti-fossil fuel policies for the crisis.

The issue has helped put the GOP on the verge of breaking a long drought in Rhode Island, where Republican Allen Fung is leading his Democratic opponent, Seth Magaziner, in the race to fill the open 2nd District seat.

A Republican has not been elected to the seat in more than three decades.

A third of Rhode Island residents heat their homes with oil, seven times the national average. More than half use natural gas. Both sources of energy have climbed considerably in cost in New England, partly due to policies banning the construction of natural gas pipelines as state officials seek renewable energy sources such as wind and solar.

Mr. Fung is calling for more domestic energy production from fossil fuels and has made high energy costs in the state a central part of his campaign. He faults Mr. Biden for creating regulatory hurdles that have blocked energy production.

He said in the last six months the oil companies have made more than $100 billion in profits but have not adequately reinvested the money to increase production or lower costs for consumers.

Republican National Committee Chairwoman Ronna McDaniel issued a statement moments after Mr. Biden left the White House podium, accusing him of lying about the cause of high energy costs and citing his repeated pledges to end the oil and gas industry as the real cause.

“Since his first day in office, Biden has attacked American energy with the help of congressional Democrats,” Mrs. McDaniel said. “Americans know that under Biden and Democrats, gas prices are higher, groceries are more expensive and real wages are down.”