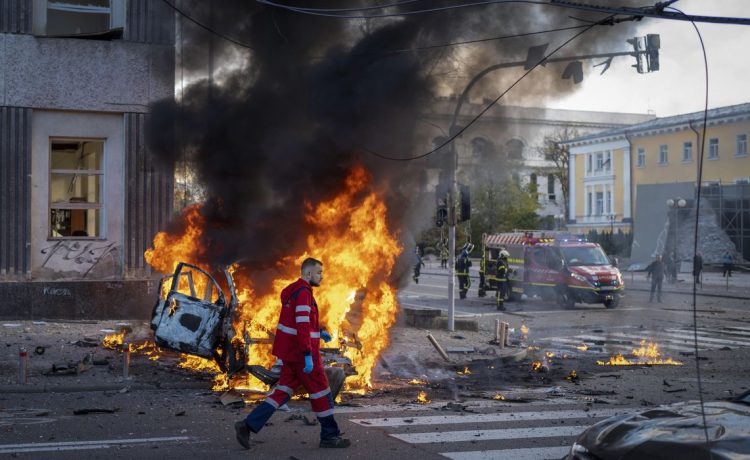 Russia launched its most sustained aerial attack since the first days of its seven-month invasion of Ukraine Monday, as a furious President Vladimir Putin sought revenge for the disabling bridge attack over the weekend that hobbled the main link between the Russia mainland and the occupied Crimean peninsula.

World leaders condemned what President Biden called the “utter brutality” of the strikes on the Ukrainian capital of Kyiv and other major urban areas, strikes that killed and injured civilians and destroyed infrastructure targets with no apparent military value.

Ukrainian officials said at least 11 people were killed and nearly 100 people injured in the attacks, including six civilians killed in Kyiv itself in an attack that struck early Monday morning local time.

The Russian volley, launched from air, land and sea, targeted cities on the front lines of the fighting and some locations far from the action. In addition to Kyiv, explosions were reported in Lviv, Ternopil and Zhytomyr in western Ukraine; Dnipro and Kremenchuk in the country’s midsection; Zaporizhzhia in the south and Kharkiv in the east.

“These attacks only further reinforce our commitment to stand with the people of Ukraine for as long as it takes,” Mr. Biden said in a statement.

Analysts said Monday’s strikes underscored two emerging realities about the war: that despite its many battlefield reverses to date, Russia retains the ability to inflict real pain and terror on Ukraine and that Mr. Putin, having badly misjudged how the war would play out, may resort to even more destructive tactics as he faces the prospect of a humiliating defeat for his troops.

Ukrainian President Volodymyr Zelenskyy said Russian commanders apparently had two objectives when they fired the Iranian-supplied drones into Ukraine: Take out the country’s energy infrastructure and target civilians as a way to spark terror.

“They want panic and chaos. They are incorrigible,” Mr. Zelenskyy said Monday during a national address. “Such a time and such goals [for the attacks] were specifically chosen to cause as much damage as possible.”

He warned that the latest round of attacks could mean temporary power shortages throughout Ukraine. The government suspended electric energy transfers to Europe to deal with the blackouts at home sparked by the attacks.

“The enemy wants us to be afraid, wants to make people run,” Mr. Zelenskyy said. “But we can only run forward, and we demonstrate this on the battlefield. It will continue to be so.”

The Ukrainian president also said on Telegram that he had spoken directly to Mr. Biden about the attacks and had a “productive conversation” on the need to bolster Ukraine’s air defenses in light of the Russian strikes targeting cities.

“These are barbaric and cowardly attacks on purely civilian infrastructure, including homes, streets, parks, playgrounds and other public places, targeting innocent civilians on their way to work and school in the morning traffic,” Mr. Borrell said in a statement. “With these attacks, Russia aims to do maximum harm. The indiscriminate targeting of civilians is prohibited under international humanitarian law and amounts to war crimes.”

“We will continue to provide unwavering economic, humanitarian and security assistance so Ukraine can defend itself and take care of its people,” Mr. Blinken added in a Twitter post.

Mr. Putin called the explosion on the 12-mile-long Kerch Bridge — a signature project of his rule — a “terrorist attack” and pointed the finger of blame at Ukraine. While a number of Ukrainian government websites and Twitter pages mocked Russia over what happened, Kyiv has not claimed responsibility for the blast.

“Let there be no doubt,” Mr. Putin said in a televised meeting with his Security Council at the Kremlin, “if attempts at terrorist attacks continue, the response from Russia will be severe.”

And while the attacks were condemned in the West, they were quickly praised by a key political base for Mr. Putin — the hawkish pro-war Russian military bloggers who have been fiercely and loudly critical of the Kremlin’s prosecution of the war to date and what they say is Mr. Putin’s reluctance to hit the adversary harder with the full might of the Russian military machine.

Andrei Kots, a war correspondent for the tabloid Komsomolskaya Pravda, wrote that he hoped Monday’s strikes were “a new mode of action to the entire depth of the Ukrainian state until it loses its capacity to function,” the Associated Press reported.

“It was just one massive attack on Ukraine’s infrastructure,” added Sergei Markov, a pro-Kremlin Moscow-based political analyst. “The Russian public wants massive attacks and the full destruction of the infrastructure that could be used by the Ukrainian army.”

While Russia military leaders insist they have engaged only legitimate military objectives since the start of the invasion about eight months ago, the U.S. Embassy in Ukraine said the country’s civilian infrastructure, power networks and government facilities were struck as well.

“Russia’s continued strikes in Ukraine pose a direct threat to civilians and civilian infrastructure,” the embassy said in a statement. “The U.S. Embassy urges U.S. citizens to shelter in place and depart Ukraine now using privately available ground transportation when it is safe to do so.”

British Prime Minister Liz Truss was one of a number of foreign leaders who said Russia’s Monday strikes were not a sign of strength but of increasing desperation by the Kremlin in the face of numerous Ukrainian successes on the battlefield.

“The UK stands wholeheartedly behind President Zelenskyy and Ukraine,” according to a statement released Monday by the prime minister’s office. “Putin’s destructive rhetoric and behavior will not diminish our resolve.”

“I am shocked and appalled by the vicious attacks on Kyiv and other Ukrainian cities. Those who are responsible have to be held accountable,” Ms. von der Leyen said. “I know that Ukrainians will not be intimidated and Ukrainians will stand by their side, as long as it takes.”

U.S. officials said the attacks only further reinforce the nation’s commitment to stand with the people of Ukraine for as long as it takes.

“Alongside our allies and partners, we will continue to impose costs on Russia for its aggression, hold Putin and Russia accountable for its atrocities and war crimes, and provide the support necessary for Ukrainian forces to defend their country and their freedom,” Mr. Biden said.

— Joseph Clark contributed to this article, which was based in part on wire service reports.