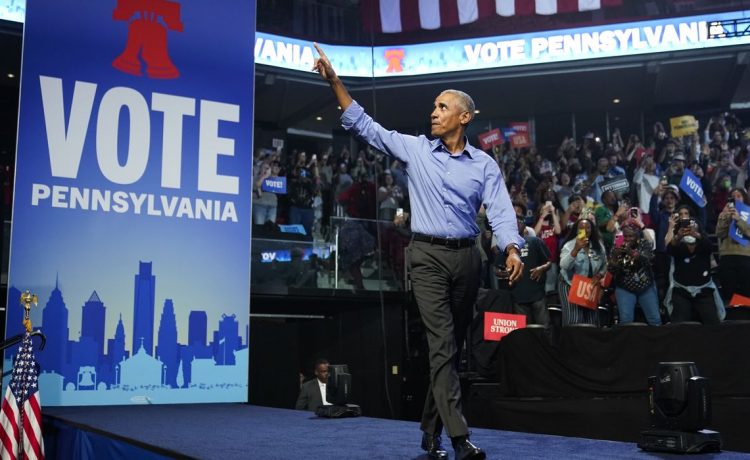 Mr. Biden and Mr. Obama reunited in the hopes of motivating key segments of the electorate including young, black, and college-educated voters to get out and help push Mr. Fetterman over the finish line in his tightknit race with Republican Mehmet Oz.

Serving as the rally’s opening act, Mr. Biden, who served for 8 years as Obama’s vice president, told the thousands in attendance the midterm elections will shape the outcome of the country for decades to come and said the “power to shape that outcome is in your hands.”

“Two years ago you used that power to make Donald Trump not only a former president, but you made him a defeated president,” Mr. Biden said, sparking cheers from those in attendance. “And this year you have the power to make John Fetterman your next United States senator, and Josh Shapiro your next governor.”

The comments came not long before Mr. Trump was set to headline a rally for Mr. Oz in western Pennsylvania.

Mr. Biden said he needs reinforcements in Washington to pass an assault weapons ban and protect abortion rights, and stop the GOP from gutting Social Security and Medicare.

“These guys will never cease to amaze me, man,” Mr. Biden. “They’re literally coming after Social Security and Medicare.”

Mr. Biden’s lagging poll numbers and high inflation have Republicans feeling good about their chances of flipping control of the Senate. The situation also has convinced some Democrats running for re-election they are better off keeping the unpopular president at an arm’s length.

Still, Mr. Biden has a unique relationship with Pennsylvania.

He was born in Scranton and likes to remind voters that when he represented neighboring Delaware in the Senate he was often dubbed Pennsylvania’s third senator.

Mr. Obama, meanwhile, has stepped into the closer’s role in the marquee Senate races that will determine the balance of power in the 50-50 Senate where Vice President Kamala Harris has the tie-breaking vote.

“Midterms are no joke,” Mr. Obama said in Philadelphia Saturday.

Mr. Obama praised Mr. Biden, who served as his vice president for eight years, as an “outstanding president.”

Mr. Obama said his former wingman steered the nation out of the coronavirus pandemic while keeping unemployment “very low,”  lowering health care and prescription drug costs, passing an infrastructure bill that will create jobs, and making the “biggest investment in clean energy in history.”

“If you help Demovtst keep the House and get a few more seats in the Senate, you can guarantee he will make more progress on the issues you care about,” he said. “You’ve seen what he has accomplished with the barest of margins, if you vote he can do even more, but it depends on you,” Mr. Obama said.

Mr. Biden drove home a similar message, saying when he took the reins from Mr. Trump “the country was in a pandemic with no plan how to get out” and said he could get more accomplished if Mr. Fetterman wins the Pennsylvania seat and vulnerable Democrats survive elsewhere.

“Elect John Fetterman to the Senate – please,” he said.