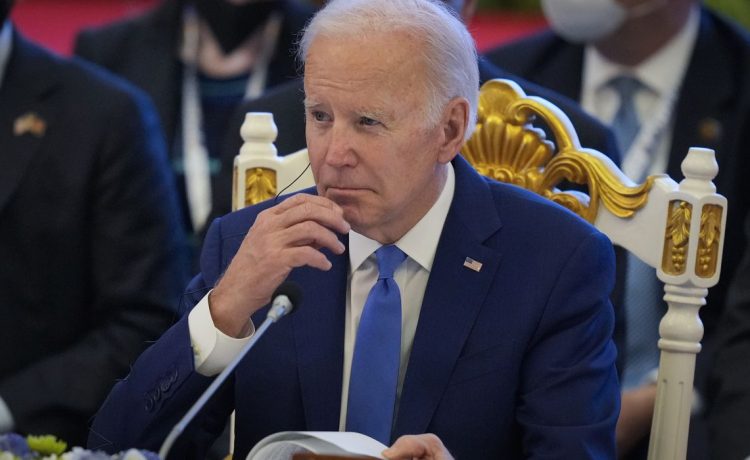 The global push to constrain Iran’s nuclear program has entered uncharted territory as the U.S. and its allies signal that negotiations with Tehran are all but dead, and it’s unclear whether the Biden administration has a viable Plan B to keep Iran’s theocratic regime from getting a nuclear bomb that the agreement was supposed to prevent.

The sudden collapse of the high-stakes multilateral talks comes as Iran deepens its diplomatic and military ties with Russia, stoking fears that perhaps the Kremlin may offer covert help with Tehran’s nuclear program in exchange for more drones and missiles for Russia’s war in Ukraine. Analysts say it’s become clear that Iran, at least for now, has virtually given up on diplomacy with the West and has made a calculated decision that there is greater benefit in aligning itself with Russian President Vladimir Putin than continuing down the path of talks with the U.S. and Europe.

The demise of those nuclear negotiations — aimed at reviving the Obama-era 2015 Joint Comprehensive Plan of Action (JCPOA), which limited Iran’s nuclear program in exchange for economic sanctions relief — combined with Iran’s deepening military partnership with Moscow has thrust U.S. policy toward Iran into uncertainty. President Trump repudiated the deal in 2018 and the Biden administration and the other world powers trying to restore it with Tehran have met with repeated frustrations at the negotiating table.

Administration officials acknowledge that nuclear talks are in a deep freeze right now, thanks largely to Iran’s support for Russia — a signatory along with the U.S. to the original 2015 agreement — and its brutal crackdown on domestic protesters. They insist that diplomacy remains the best tool for keeping Iran from acquiring nuclear weapons, a goal that could take on even more importance amid U.N. reports that Iran is actively ramping up uranium enrichment and other nuclear processes in the absence of a new agreement.

But it’s unclear just how well-prepared the administration is for this crucial moment. Reversing Mr. Trump’s withdrawal in 2018  has been the bedrock of the Biden administration’s Iran policy for nearly two years.

Critics say that many of the top liberal negotiators inside the Biden administration, including State Department special Iran envoy Robert Malley, were so committed to a resurrection of the JCPOA that there’s been little thought given to an alternative, nor are there any easy solutions for how to deal with a government in Tehran that is increasingly impatient to get relief from economic sanctions and antagonistic toward the West and its own citizens.

“A lack of Plan B has been the problem in Iran strategy throughout the JCPOA era,”  said former Defense Department official Michael Rubin, a critic of the original deal and now a resident scholar at the American Enterprise Institute.”First Obama’s and then Biden’s failure to enunciate a best alternative to a negotiated agreement convinced the ayatollahs [in Iran] that negotiators … were desperate.”

“Biden’s team are like gamblers, already deep in the hole, who believe they can extricate themselves with just one last bet,” he said. “But instead of losing cold hard cash, they hemorrhage hard-fought, cross-generational American credibility. … Biden has no Plan B.”

Mr. Rubin added that, “In the short-term, the Iranian regime will win unless there is an immediate restoration of maximum pressure” policies implemented during the Trump era. Those policies targeted the Iranian economy with unprecedented sanctions, grinding Iran’s economic growth to a halt and greatly restricting its ability to conduct business or sell its vast oil and natural gas reserves internationally.

Against that backdrop, Iranian Supreme Leader Ayatollah Khamenei and Iranian President Ebrahim Raisi seem to have approached the latest round of diplomacy with skepticism. Having struck a deal once with the West only to watch it torn up by the new U.S. president, Iranian leaders sought hard, unrealistic guarantees throughout negotiations that Washington would never pull the rug out again. U.S. officials also say the Iranian side insisted on an end to United Nations investigations into undeclared nuclear sites as part of any deal, among other demands that the Biden administration rejected.

Still, the administration forged ahead with negotiations while simultaneously hitting Iran-linked militias in Syria with multiple retaliatory airstrikes.

It wasn’t until Iran’s September crackdown on domestic protesters, and its high-profile sales of so-called “suicide drones” to Russia, that diplomacy finally fell apart.

“If [the Iranians] were very interested in the revival of the nuclear deal, they should not have sent those drones to Russia. The fact they gave [the West] reason to second-guess their commitment to diplomacy is Iran’s fault,” said Alex Vatanka, Iran program director at the Middle East Institute.

“They made a decision to commit themselves to Putin,” he said. “In the context of nuclear talks with the West, you don’t have to be a genius to figure out that Ayatollah Khamenei, first and foremost, cares about pleasing Putin. If that’s going to damage him in the nuclear talks … so be it. That’s a secondary issue for him.”

Iran, for its part, has issued widely disbelieved denials that it sent military drones to Moscow since the Ukraine war began and insists it remains committed to talks to restore a new version of the JCPOA, blaming Washington for the impasse.

Mr. Vatanka stressed that he believes nuclear talks could resume at some point in Mr. Biden’s tenure, though by that point the looming 2024 U.S. presidential election may give Tehran even greater pause about the staying power of any deal. The failure of Republicans — who in large part have been deeply critical of the original agreement and of the talks to revive it — to make major gains in Congress in the 2022 midterm elections also may give Mr. Biden some unexpected room to maneuver.

But for now, European officials who have actively lobbied to restore the agreement are offering a grim prognosis. Earlier this month, Bijan Djir-Sarai, general secretary of Germany’s liberal Free Democrats party, part of the new German coalition government, told multiple news outlets that the Iran nuclear deal “has no future and is not in line with reality.” British and French officials said in late October that Iran’s sale of drones to Russia is a direct violation of the terms of the JCPOA, meaning Europe could reinstitute its own slate of economic sanctions on Iran. Such a step would make diplomacy even less likely.

Mr. Malley was even more blunt in his appraisal, telling CNN late last month that the nuclear deal is “not even on the agenda.”

“It’s not a focus because there’s no movement,” said Mr. Malley.

In a speech earlier this month at a Carnegie Endowment for International Peace event, Mr. Malley defended the administration’s handling of its Iran policy. Deal supporters argue the agreement was never intended to roll back all of Iran’s hostile policies in the region but was intended to take the fear of an Iranian bomb — and a likely Middle East nuclear arms race — off the table so other problems could be addressed.

Mr. Malley stressed that the U.S. instituted sanctions and took other steps to punish Iran when its proxy militias targeted American troops in the region.

“I think people have to understand that they were not tying our hands because of … this hope that someday maybe there’ll be a deal,” he said. “No, we are taking action. We’re not waiting. We’re taking the action that we think is consistent and necessary to promote our values and our national security interests.”

Moving forward, there are mounting questions about how closer Iran-Russia ties could reshape the global security landscape. Russia is relying heavily on Iranian-made Shahed drones for attacks on Ukrainian infrastructure, and it’s all but certain that Tehran wants something in return. Mr. Raisi, Iran’s hard-line president, said as much in meeting Russian Security Council Secretary Nikolai Patrushev in Tehran on Wednesday for talks on bilateral economic and strategic cooperation.

“Cooperation among independent countries is the most decisive answer to the sanctions and destabilization policy of the United States and its allies,” Mr. Raisi told his Russian guest, according to Iranian press accounts.

Most analysts agree that it’s not in Moscow’s interest to help Iran develop a nuclear weapon. Russia was a signatory to the original JCPOA, along with the U.S., Britain, France, Germany and China, and Kremlin leaders publicly stand by the policy of preventing Tehran from getting a nuclear bomb.

Still, national security specialists are worried about what the future may hold.

“As for selling drones to Russia, this is something the Iranians have discussed for years prior to the Ukraine war. We just laughed them off. Sometimes enemies tell us exactly what they will do. We need to take them at their word,” said Mr. Rubin, the AEI analyst.

“Maybe George W. Bush wasn’t so wrong about the Axis of Evil. He was just mistaken about not including Russia in it,” he said.