The Great Days > News > Biden stumps for Democrats out West with a message of climate, health care and infrastructure wins
News

Biden stumps for Democrats out West with a message of climate, health care and infrastructure wins 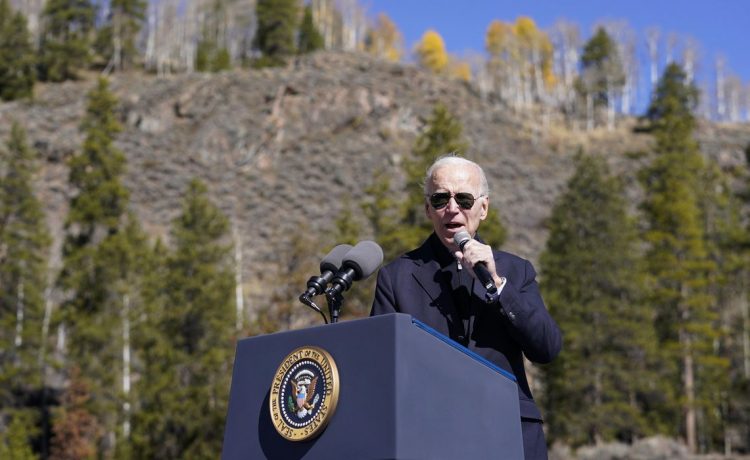 President Biden on Wednesday kicked off a three-state trip out West with a stopover in Colorado to designate his first national monument before heading to California and Oregon.

Mr. Biden praised America’s public lands as “wonders that define us as a nation” before signing the decree to designate Camp Hale — Continental Divide as a national monument. Camp Hale is a former training site for the Army’s 10th Mountain Division,

“They unite us,” he said. “That’s what today is all about. We’re doing it not just for today, but for all the ages.”

Mr. Biden was joined at the signing by Colorado’s Democratic Gov. Jared Polis and three members of the state’s delegation in Washington including Sen. Michael F. Bennet who is facing a reelection face-off against Republican challenger Joe O’Dea.

The national monument designation coincided with Mr. Biden’s proposal to freeze new mining claims and mineral leases for nearly 225,000 acres in Colorado’s Thompson Divide for 20 years. The Bureau of Land Management and Forest Service seek public comment and conduct an environmental analysis before finalizing the withdrawal, which the White House said is meant to preserve the Thompson Divide’s wildlife and clean air and water.

Critics called the plan another appeasement of environmentalists while Americans pay more at the pump.

“Rather than working on real issues like reducing inflation and improving the economy, Joe Biden came to Colorado today to unilaterally lock up hundreds of thousands of acres through the stroke of his pen and prevent Coloradans from using our public lands for activities that we want and need,” Rep. Lauren Boebert, Colorado Republican said. “With gas prices skyrocketing, OPEC decreasing its oil production, and Americans already struggling to pay their utility bills, this land grab to shut down American energy and natural resources production could not come at a worse time.”

Rep. Bruce Westerman of Arkansas, the top Republican on the Natural Resources Committee, blasted the proposed Thompson Divide withdrawal as “doubling down on incompetence.”

The White House contends that oil and gas leases at Thompson Divide have been off the table for several years and that there is no planned oil exploration or production currently planned in the area. The administration also says that pre-existing natural gas leases in the area are unaffected by the proposed withdrawal.

The focus on public lands is a slight departure from Mr. Biden’s traditional campaign pitch ahead of the Nov. 8 midterm elections. He is expected to return to the script touting climate, healthcare and infrastructure spending when he is in California and Oregon.

Democrats face stiff headwinds going into the midterms amid persistent inflation and an economic outlook that grows more gloomy by the day.

Democratic candidates in tough races have been apprehensive about campaigning alongside Mr. Biden, amid months of low approval ratings.

He is notably steering clear of stops in Arizona and Nevada, where his presence could hurt Democrats in crucial Senate races that will determine which party controls the upper chamber.

On Thursday in Los Angeles, Mr. Biden is expected to tout the infrastructure bill signed into law. He will survey progress on the city’s expansion to its metro and will be joined by California Democrat Rep. Karen Bass and other city officials.

Mr. Biden’s clout will be put to test in Democratic stronghold Oregon later this week where Democrats are in danger of losing the governor’s race. In recent polls, Republican Christine Drazan holds a slight edge in the three-way contest against Democrat Tina Kotek and Betsy Johnson, an independent.

The three are vying to replace incumbent Kate Brown, a term-limited Democrat.

Democrats are still hopeful Mr. Biden can turn the tide during his visit.

Republicans, who have seized on homelessness and crime in the state in honing its message, don’t think Mr. Biden will help his party.

“Democrats are panicked their multi-decade grip on the governor’s office is slipping away as Christine Drazan connects with a majority of Oregon voters who yearn for change,” Jesse Hunt, a spokesman for the Republican Governors Association told the Associated Press. “The Democrat regime of Joe Biden, Kate Brown, Tina Kotek, and Betsy Johnson has done nothing to make Oregon safer or more prosperous.”