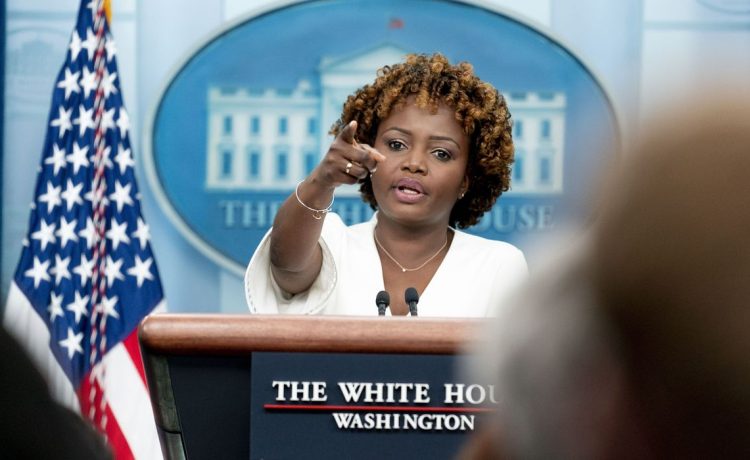 President Biden will not ask Congress for help changing his $740 billion tax-and-climate law, the White House announced, despite the president’s acknowledgment that his seminal legislation contains “glitches” after receiving sharp criticism from French President Emmanuel Macron.

White House press secretary Karine Jean-Pierre said Friday the administration would conduct “substantive consultations” with European counterparts to address their concerns about so-called protectionist measures contained in the law, known as the Inflation Reduction Act. But she clarified that the president is “not going to be addressing any glitches” written into the legislation.

“We don’t have any plans to go back to Congress for legislative changes to the Inflation Reduction Act at this time,” she said. “For any historic legislation like IRA, there is a complex implementation and process which is actively underway at federal agencies. But… we’re not going to be addressing any glitches.”

Mr. Biden offered a wavering defense for the legislation on Thursday following an hours-long Oval Office meeting with Mr. Macron, who is among a chorus of European leaders saying the law’s tax credits for U.S.-manufactured electric vehicles threaten to crush Europe’s manufacturing base as automakers move across the Atlantic to capitalize on the incentives.

“The United States makes no apology, and I make no apologies, since I wrote it, for the legislation,” Mr. Biden told reporters. “But there are occasions when you write a massive piece of legislation … there’s obviously going to be glitches in it, and the need to reconcile changes.”

Mr. Macron has said green-energy subsidies meant to incentivize semiconductor production in the U.S. for electric vehicles are unfair to European industries trying to compete.

Though Mr. Biden said he wouldn’t apologize, he said he didn’t intend to harm his European allies.

“It was never intended, when I wrote the legislation, to exclude folks who were cooperating with us,” Mr. Biden said. “That was not the intention.”

Mr. Biden hosted the French president for the first state visit of the Biden presidency, including a state dinner.

The French leader signaled that they aired their grievances over the law in closed-door discussions at the White House.

French Finance Minister Bruno Le Maire, who is joining Mr. Macron for his visit this week, previewed a potential request for “exemptions on some duties and limits imposed” by the Biden administration before departing on his trip to Washington.

“The real question we must ask ourselves is what sort of globalization is ahead of us?” Mr. Le Maire told France 3 television. “It is time Europe favors European production. All European states must understand that today in the face of these American decisions, we must learn to better protect and defend our economic interests.”

Mr. Macron chided the tax provisions in the law as “super aggressive” in a closed-door meeting Wednesday with lawmakers on Capitol Hill, according to Agence France-Presse.

Mr. Macron dulled his criticism slightly in front of reporters after he met with Mr. Biden.

“We want to succeed together, not one against the other,” he said. “This is the outcome of our discussions this morning, and this is exactly the philosophy that I share and it is the one that we need.”

Mr. Biden pledged to continue to work with France and other European allies to smooth issues that have arisen from the legislation, but stopped short of pledging specific carve-outs.

“There are tweaks that we can make that can fundamentally make it easier for European countries to participate or be on their own,” he said. “But that is a matter to be worked out.”

Ms. Jean-Pierre clarified on Friday, though, that those tweaks will not be worked out on Capitol Hill.

“This is a matter we are working out through substantive consultations and European counterparts,” she said. “We won’t get ahead of that process.”