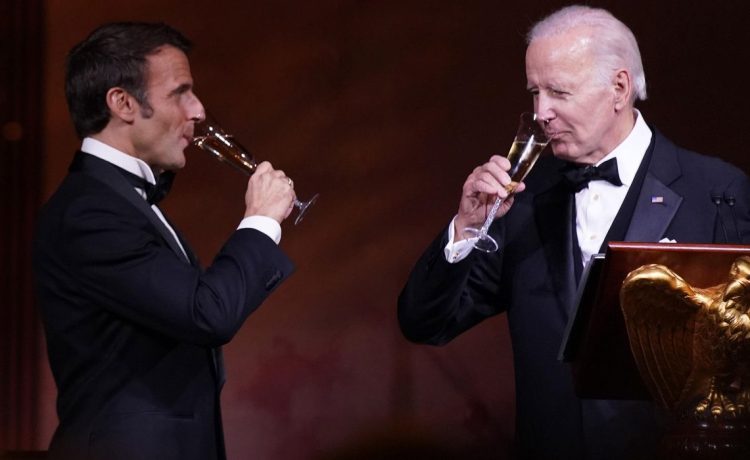 President Biden and French President Emmanuel Macron toasted to the longstanding friendship between the U.S. and France in a gesture of unity capping an official state visit marred by a rift over economic competition.

Speaking before a star-studded audience in attendance at Mr. Biden’s first official state dinner since taking office, both leaders drew from the two countries’ history of coming to one another’s defense in reaffirming their commitment to upholding the shared values that underpin the longstanding relationship.

“France was our first ally,” Mr. Biden said. “The first country to fly the American flag after our revolution.”

“To France,” Mr. Biden said, raising his glass. “To the history that binds us and to the values that still unite us.”

“We come from the same values,” Mr. Macron said. “These principles are at risk. They are challenged even in our societies, in our democracies.”

“We stand together, shoulder to shoulder, precisely to be entitled to say at the same time ‘We the People’ and ‘liberté, égalité, fraternité,’” Mr. Macron said.

The arrival preceded an hours-long Oval Office meeting between the two leaders and visits by Mr. Macron and Vice President Kamala Harris to the State Department.

The Biden administration has billed the official visit as a symbol of the strong ties between the U.S. and its oldest ally and a chance for the two countries to align closely on global issues such as climate change, the war in Ukraine and competition with China.

But key points of contention emerged during the visit over Mr. Biden’s $740 billion tax and climate law.

Europeans say Mr. Biden’s seminal legislative accomplishment, which includes generous tax credits for U.S.-manufactured electric vehicles, threatens to cripple their manufacturing as automakers move operations across the Atlantic to capitalize on the incentives, sucking away jobs and investment money as the bloc braces for economic headwinds.

Mr. Macron reportedly chided the protectionist provisions in the law as “super aggressive” in a closed-door meeting Wednesday with lawmakers on Capitol Hill, according to Agence France-Presse.

Mr. Biden offered a wavering defense of the law after the two leaders met for lengthy closed-door talks.

“The United States makes no apology, and I make no apologies, since I wrote it, for the legislation,” Mr. Biden told reporters. “But there are occasions when you write a massive piece of legislation … there’s obviously going to be glitches in it, and the need to reconcile changes.”

Though he said he wouldn’t apologize, Mr. Biden said he didn’t intend to harm his European allies.

“It was never intended, when I wrote the legislation, to exclude folks who were cooperating with us,” Mr. Biden said. “That was not the intention.”

“We want to succeed together, not one against the other,” he said. “This is the outcome of our discussions this morning, and this is exactly the philosophy that I share and it is the one that we need.”

Tensions dissipated by nightfall as hundreds of dignitaries, celebrities and lawmakers from both sides of the aisle arrived to attend the evening gala.