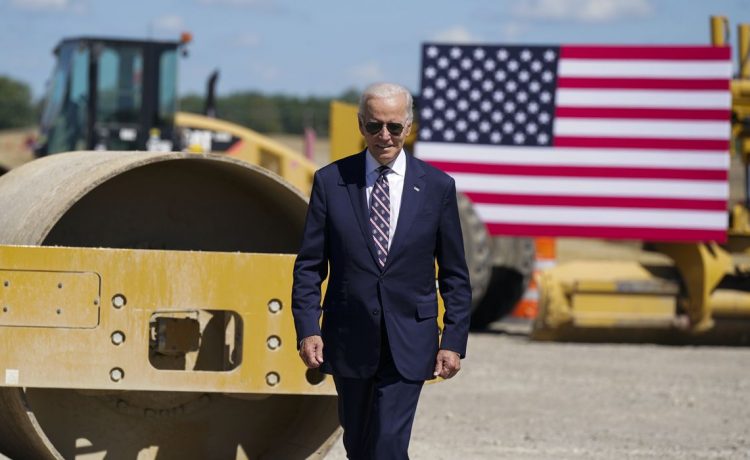 President Biden lauded the return of the “industrial Midwest” as semiconductor giant Intel broke ground on its $20 billion chip manufacturing facility in Ohio.

Intel delayed the start of construction on its new facility outside of Columbus, originally scheduled in July, until Congress’ final passage of the long-stalled semiconductor funds.

“‘Made in Ohio’ and ‘made in America’ is no longer just a slogan,” Mr. Biden said as earthmovers toiled in the background. “The industrial Midwest is back.”

Intel’s new facility, which will include at least two fabrication plants to produce “leading-edge chips,” is expected to add 3,000 full-time jobs and more than 7,000 union construction jobs.

Intel also announced on Friday that it will provide $17.7 million to Ohio universities “to develop semiconductor-focused education and workforce programs.”

The groundbreaking ceremony marked the realization of Mr. Biden’s vision of “a field of dreams in the middle of Ohio” and a U.S economy centered on domestically produced technology, which he imagined in his State of the Union address last March.

“It’s happening,” Mr. Biden said. “It’s a reality today and it’s just beginning. Because I signed into law the Chips and Science Act we are accelerating the progress. This new law makes historic investments for companies to build advanced manufacturing facilities here in America.”

The spotlight on the win for Mr. Biden played out in a key state for Democrats in the November midterms, where Senate hopefuls Rep. Tim Ryan, a Democrat, and Trump-backed Republican J.D. Vance are in a fierce battle to fill the seat of Sen. Rob Portman, a Republican who is retiring.

Mr. Ryan made an appearance at the groundbreaking, signaling the broad appeal of Mr. Biden’s push to bring high-tech manufacturing jobs onto U.S. shores.  In July, Mr. Ryan gave a high-profile snub to Mr. Biden during the president’s visit to the Buckeye State, which he lost by more than 8 percentage points in 2020.

But the congressman has still kept his distance from Mr. Biden and the broader Democrat platform in his push to win the Senate race.

In a Thursday interview with local Youngstown’s WFMJ, Mr. Ryan said he is “campaigning as an independent,” and declined to back Mr. Biden for a second term.

“My hunch is that we need new leadership across the board, Democrats, Republicans, I think it’s time for… a generational move,” he said.

On Friday, Mr. Ryan clarified his remarks to reporters at the groundbreaking ceremony, saying it is “up to” the president whether he should run again.

“The president said from the very beginning he was going to be a bridge to the next generation, which is basically what I was saying,” Mr. Ryan said.

Other Democratic candidates in Republican-leaning states have been apprehensive about campaigning alongside Mr. Biden, who has faced months of low approval ratings.

The payout for semiconductor manufacturers, though, received broad support from both sides of the aisle in Congress. Mr. Vance also touted the new Intel plant as “a great bipartisan victory” for Ohio.

Proponents of the bill, which includes more than $50 billion in the next five years for chip manufacturing and a 25% tax credit through 2026 for new chip production, say it will reduce America’s dependence on China and resolve a major supply chain issue that has contributed to high inflation.

Without a steady flow of semiconductors, which are used to manufacture a variety of goods such as smartphones, automobiles, washing machines and advanced weapons, proponents warn that the U.S. will be severely hobbled in maintaining economic stability.

Secretary of Commerce Gina Raimondo has promised to impose strict guardrails on the funds as the administration rolled out its strategy for doling out the aid, which include $28 billion in “leading-edge” semiconductor manufacturing, $10 billion in new manufacturing capacity and $11 billion to strengthen U.S. leadership in semiconductor research.

“This is not a blank check for companies,” Ms. Raimondo told reporters. “There are clear guardrails on this money and the Department of Commerce intends to be vigilant and aggressive in protecting taxpayers.”

She added that the money could not be used for stock buybacks and that the funds are meant to enhance rather than replace private investment, and the U.S. taxpayer dollars cannot go to develop leading-edge semiconductor technologies in China.

“These are some of the most stringent taxpayer protections and guardrails we’ve ever had,” Ms. Raimondo said. “We’re going to look after every nickel of taxpayer money.”

The government also can claw back funds from companies if they are misspent or if companies fail to put them to use, according to Ms. Raimondo.

Several semiconductor heavyweights have linked further investment in the U.S. to the federal subsidies included in the bill.

Micron announced after funding was approved by Congress that it would spend $15 billion on a new semiconductor manufacturing plant in Boise, Idaho as an initial phase of a $40 billion plan to build “leading-edge memory” plants across the U.S.