Biden urges voters to back pro-abortion candidates in midterms 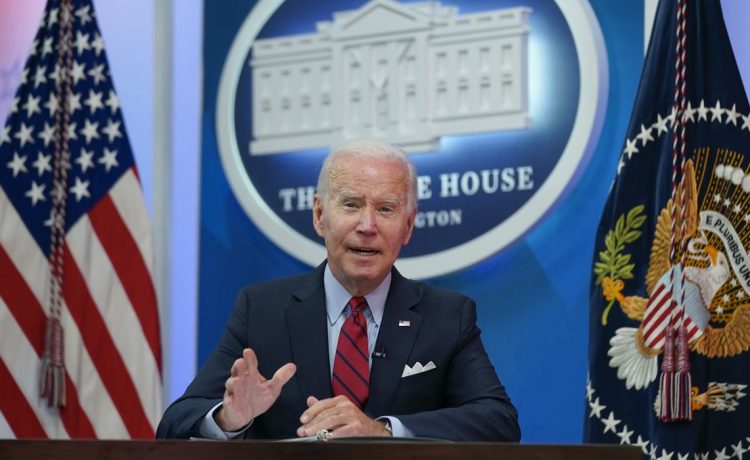 President Biden is urging voters to back candidates who will protect abortion access in the November midterm elections, as he met with Democratic governors on their response to the Supreme Court decision overturning Roe v. Wade.

Mr. Biden underscored the need to drop the Senate filibuster to codify abortion rights, but emphasized it will happen only if voters send more Democrats to Congress.

“We don’t have the votes in the Senate to change the filibuster at the moment and that means we need two more votes,” Mr. Biden said Friday. “The choice is clear: We either elect federal senators and representatives who will codify Roe, or Republicans who [are] elected to the House and Senate will try to ban abortion nationwide.”

“This is going to go one way or another after November,” he said.

Mr. Biden is hoping that leftist outrage against the ruling, which overturned nearly 50 years of abortion rights, will spur voters to support Democrat candidates who can pass a law guaranteeing the abortion rights spelled out in the 1973 Roe ruling.

The White House has been under pressure from Democrats and abortion rights activists, who are frustrated by what they say is a lack of action to protect abortion rights.

Mr. Biden has dismissed some progressive ideas, including providing abortion services on federal land and declaring a public health emergency on reproductive services.

The president met virtually with 10 Democratic governors to brainstorm about how the administration and states can partner on the abortion issue.

Ahead of the meeting, Mr. Biden said the abortion fight is “not over.” He vowed the federal government will protect women traveling across state lines to seek an abortion, and women who try to access the abortion pill. He announced both actions last week.

Ms. Hochul talked about how she convened an extraordinary session of the state legislature in Albany on Friday to consider enshrining abortion access in New York’s constitution, and to enact a package of gun control measures after the Supreme Court struck down the state’s concealed-carry law.

“We are one step closer as of this afternoon,” Ms. Hochul said about codifying abortion rights. “As long as I’m governor these rights will not be rolled back.”

Mr. Biden repeatedly emphasized the need for more Democratic lawmakers who will help him change the filibuster rule.

The change would make it easier for the Senate to pass legislation on abortion rights with a simple majority, instead of the 60 votes required for most measures.

Democrats currently hold the Senate majority with 50 senators and have Vice President Kamala Harris for a tie-breaking vote, meaning Democrats can’t advance much of their agenda with the filibuster in place.

Mr. Biden, who long opposed dropping the filibuster to pass legislation, announced last year that he would be open to altering it so Congress could advance two bills that would overhaul U.S. elections. However, that call failed to gain any traction, and the bills never passed.

It is unlikely that a carve-out for abortion would gain widespread support from two centrist Democrats, Sens. Joe Manchin III of West Virginia and Kyrsten Sinema of Arizona, who have expressed doubts about changing the filibuster.