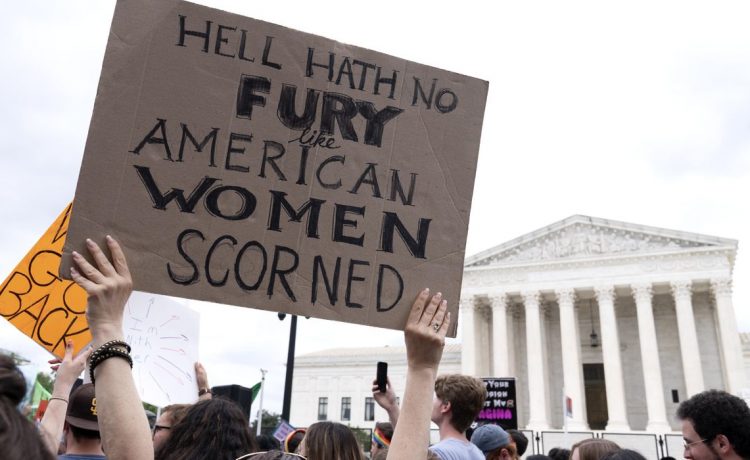 Women are fired up over the Supreme Court’s decision to overturn the federal right to abortion, fueling a stark gender divide in midterm polling, but sour feelings on the economy are starting to eclipse the summer bombshell — a bad sign for Democrats.

President Biden quarried the abortion fervor during a campaign speech in Washington on Tuesday, saying the court’s conservative majority “practically dared” women to show up in large numbers on Nov. 8 by stripping away the right it had established in the 1973 Roe v. Wade decision.

He said Republicans would consider a nationwide ban on abortion if they retake Congress. But, Mr. Biden vowed, the first task of an expanded Democratic majority would be legislation to re-establish a federal right to abortion.

His open appeal to female voters coincides with warning signs for his party.

Despite a polling advantage with women broadly, independents who could determine key contests are breaking toward the GOP because of economic worries, according to a New York Times/Siena poll released this week.

Poll after poll also shows that the economy and inflation — key issues for GOP candidates — are top of mind for voters while issues like abortion or gun control rank lower.

At the same, surveys show abortion is a motivating factor who independent women who support Democratic candidates by wide margins in marquee

Senate races. Given that backdrop, Mr. Biden’s speech offered a direct appeal to women who remain livid about the June decision in Dobbs vs. Jackson Women’s Health Organization and sympathetic to the Democratic response.

“I want you to remember how you felt,” Mr. Biden said. “How you felt that day the extreme Dobbs decision came down and Roe was overturned after 50 years.”

Forecasters say the GOP is poised to retake the House majority it lost in the 2018 midterm elections because it only needs to net five seats (much less than the historic average in midterm elections for the party out of the White House) and newly drawn congressional maps favor Republicans in key contests.

The evenly divided Senate remains a toss-up heading into the sprint toward Election Day, with questions about candidate quality blunting Republican advantages.

Surveys around the biggest swing-state Senate races show the sexes are mirror images, with men breaking toward Republican J.D. Vance in Ohio by 13 points while women prefer Democrat Tim Ryan by 10 points in the latest polling from Emerson College poll.

The trend is playing out in its other contests, with Georgia women selecting Democratic Sen. Raphael Warnock over Republican Herschel Walker by high single digits while men prefer the football legend. There is a similar split in Pennsylvania’s race between Democratic Lt. Gov John Fetterman and Republican Mehmet Oz.

While the “gender gap” has been a fixture of U.S. politics for decades, political analysts say the abortion decision is the key factor in this cycle.

“It is clear that the rage among women that their body is no longer under their own control has sent them into a fury which was quite intense in the weeks after the Dobbs decision. In the immediate aftermath, lots of men were also upset,” said Ross Baker, a politics professor at Rutgers University in New Jersey. “My guess is that the intensity of feeling between men and women has diverged. Women remain angry and mobilized, men somewhat less so.”

“There has always been a gender gap in party affiliation. On matters of war and peace, for example, women see the GOP as more truculent and disposed to use military force; Democrats less so,” Mr. Baker said. “But it’s also the salience of the abortion issue. It is women who are most directly affected.”

And in Nevada, a key pickup opportunity for the GOP, Republican Adam Laxalt leads among independent men 45%-33% but trails Sen. Catherine Cortez Masto, 38% to 35%, with a high undecided rate.

“It’s almost like the president has formulated these remarks on the PowerPoint slides and data we’ve produced,” Mr. Paleologos said of Mr. Biden’s speech at the Howard Theatre.

Early voting has begun in some states, and it’s unclear which way the economic winds might blow by Election Day.

Women who identified as independents favored Republicans by 18 points in the NYT/Siena poll, a massive swing from a 14-point edge for Democrats in September as liberal candidates focused on abortion access. Some independent women told NYT/Siena pollsters that while they were livid about the abortion decision, Republicans seemed more “geared toward business” and could address inflation worries.

Pollsters said it is unclear whether those findings mean Democratic support will crater in the coming days or if it is a blip on the polling radar, given the historic sweep of the abortion issue.

“We haven’t picked that trend up yet,” Mr. Paleologos said. “I don’t know that after many decades of Roe v. Wade how an issue like that, which drove so much voter registration, just dissipates because the leaves are turning.”

Republicans say Democrats are overreaching on abortion and remain out of step with Americans struggling to afford food and gas.

“First, Americans do not want Biden and Democrats’ extreme, taxpayer-funded abortion-on-demand agenda,” RNC Chairwoman Ronna McDaniel said Tuesday. “Second, Democrats can’t distract from the Biden pay cut, the higher prices, and the tax increases they have inflicted on voters. Republicans will win in November because we are focused on the issues voters care about most.”

“Our economy is sliding into recession, deadly narcotics are pouring through our southern border, crime has a chokehold on our communities,” Tammy Smiley, a Republican candidate for U.S. Senate in Washington, said Tuesday. “But President Biden’s top legislative priority tackles none of these crises.”

There are signs that soaring costs, a wobbly Wall Street and fears of a recession are boxing out everything else.

Abortion ranked third among critical issues in a recent CBS/YouGov poll, with 54% deeming it “very important,” though that number is much less than the amount who ranked the economy (86%) or inflation (76%) that way.

Some of the fallout of the ruling may have been blunted by the realization that abortion is now a state-level issue, not one on which federal office-holders dominate.

Places like Arizona and Georgia sprang into action immediately after the ruling with new restrictions, while voters in places like Pennsylvania and Colorado will see no change and some blue-state leaders took action to reaffirm or even expand access.

A recent Harvard/Harris poll found voters were evenly split, 50-50, on whether they supported or opposed the Dobbs decision in a polling question that notes the ruling “allows each state to decide its own standards for abortion instead of a set right.”

A plurality of voters said the abortion rights should be set by state legislatures (47%) instead of Congress (29%) or “Supreme Court judges” (23%) — though among Democrats alone, the biggest share would like nationwide rules from Capitol Hill.

While four in 10 voters said the Dobbs decision made them more likely to vote for a Democrat, nearly an equal number — 37% — said it pushed them toward a Republican and 23% said it had no effect.