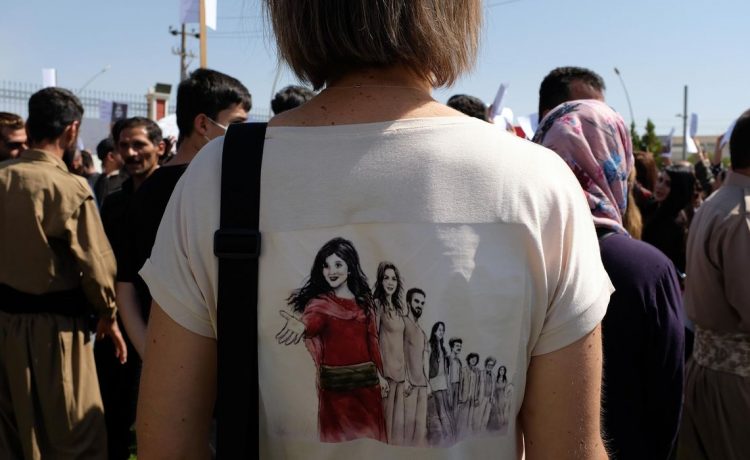 President Biden on Monday said he remains gravely concerned about the Iranian regime’s “violent crackdown” on protesters who took to the streets after a 22-year-old woman who challenged the Islamic dress code died while in the custody of Iran’s morality police.

Mr. Biden pledged to hold accountable those Iranian officials that are “employing violence to suppress civil society.” He said the U.S. will impose further costs on those who perpetuate Iran’s crackdown on protesters.

“For decades, Iran’s regime has denied fundamental freedoms to its people and suppressed the aspirations of successive generations through intimidation, coercion, and violence,” Mr. Biden said. “The United States stands with Iranian women and all the citizens of Iran who are inspiring the world with their bravery.”

Large-scale protests spread throughout dozens of cities across Iran in the wake of the death of the young woman, Mahsa Amini. The protests then sparked a brutal response as leaders in Tehran attempted to squash the country’s largest uprising against the regime in years.

Iran’s supreme leader Ayatollah Ali Khamenei spoke out for the first time on the protests which have raged since mid-September. He said he was “deeply heartbroken” by Amini’s death which he called a “tragic incident.”

He accused the U.S. of stoking the widespread protests in a bid to destabilize Iran.

“This rioting was planned,” Mr. Khamenei said. “These riots and insecurities were designed by America and the Zionist regime, and their employees.”

Iran’s leaders attempted to stifle information flow within the country through internet blackouts.

Mr. Biden said on Monday that the U.S. “is making it easier for Iranians to access the Internet, including through facilitating greater access to secure, outside platforms and services.”

Lawmakers on both sides of the aisle have united in condemning Iran’s leaders for the brutal crackdown, which has left more than 130 people dead, according to Iran Human Rights, a group based in Norway.

Senate Foreign Relations Chairman Robert Menendez led a bipartisan group of lawmakers from both chambers on Thursday in introducing a resolution to reaffirm U.S. support for “the Iranian citizens who have taken to the streets in peaceful protest for their fundamental human rights, and condemning the Iranian security forces for their violent response.”

An identical resolution was introduced by Rep. Michael T. McCaul of Texas, the top Republican on the Foreign Affairs Committee.

The regime’s crackdown on its people further complicates already fraught relations between Washington and Tehran amid Mr. Biden’s push to revive the Obama-era nuclear deal with Iran.

The Biden administration has been mired in months of stalled negotiations over restoring the 2015 deal, formally known as the Joint Comprehensive Plan of Action, JCPOA.

Lawmakers on both sides of the aisle eye the administration’s attempts to restore the deal with skepticism.

Mr. McCaul, a staunch critic of the negotiations, said the U.S. must “make clear that it cannot be business as usual with the Iranian regime.”

“We must do all we can to support the Iranian people’s right to self-determination and ensure those responsible for the violent suppression of peaceful protests are held to account,” he said.

White House press secretary Karine Jean-Pierre told reporters that the administration would continue to pursue talks with Iran on the JCPOA despite the regime’s response to the protests.

“As long as we believe pursuing JCPOA talks is in the U.S. national security interest, we will do so,” she said. “At the same time, we will continue to use other tools to address other problems with Iran‘s behavior, as we have.”

“We’re not going to slow down one inch in our defense and advocacy for the rights of the women and the citizens of Iran,” she said.