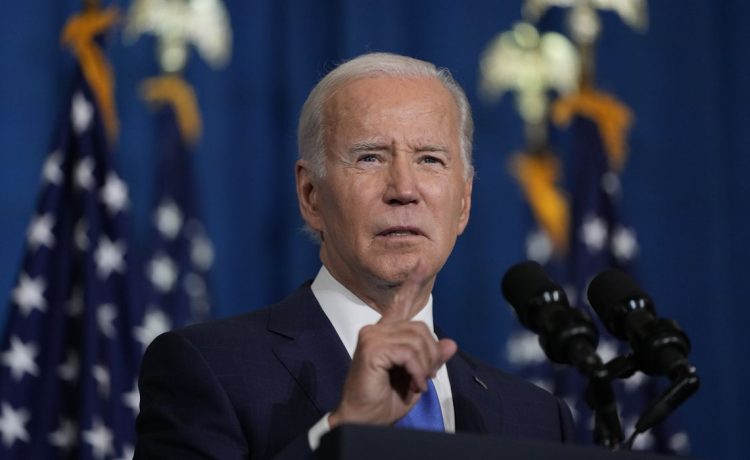 President Biden on Wednesday made his closing campaign pitch to voters for next week’s midterm election, warning that “dark forces” within the Republican Party are trying to subvert democracy.

Speaking from Union Station, which stands in the shadow of the U.S. Capitol, Mr. Biden said the threat of a Jan. 6-style insurrection was simmering within the GOP and stoked by candidates allied with former Presiden Donald Trump.

He said those “MAGA Republicans” — who he said were a minority in the GOP — were on “a path to chaos” that posed a grave threat to American democracy.

The president appealed for Americans to vote in next week’s election saying it was critical to preserving democracy. He cautioned against having election deniers on the ballot, saying “it is damaging, it is corrosive, and it’s destructive.”

“This is no ordinary year,” Mr. Biden said. “In a typical year, we are not often faced with the question of whether the vote we cast will preserve democracy or put it at risk. But we are this year.”

“Joe Biden promised unity but has instead demonized and smeared Americans while making life more expensive for all. While Republicans remain focused on the issues that matter most to voters, Biden and Democrats are flailing in the final days because they have lost touch with the concerns of families struggling to get by,” she said in a statement.

The location for the president’s address was chosen to remind voters of the Jan. 6, 2021, attack on the Capitol when a pro-Trump mob stormed the building trying to stop the certification of Mr. Biden’s 2020 election win.

Mr. Biden kicked off his speech by drawing a direct line between the Jan 6 riot to the violent attack last week on Paul Pelosi, the husband of House Speaker Nancy Pelosi, California Democrat. The invasion of the Pelosis San Francisco home and assault on Mr. Pelosi with a hammer resulted in serious injuries, including a skull fracture.

The president said former Mr. Trump and his allies’ endless denial of the nation’s 2020 election results fueled the attack.

“The big lie that the election of 2020 had been stolen — it is a lie that fueled the dangerous rise of political violence and voter intimidation over the past two years,” Mr. Biden said.

The remarks were part of a political event hosted by the Democratic National Committee and not an official White House speech. It echoed many of the same points Mr. Biden has been making for weeks, starting with his prime-time speech in Philadelphia where he railed against “MAGA Republicans.”

He repeated many of the same themes at a speech Tuesday in Florida and the Wednesday speech in Washington.

Mr. Biden has repeatedly warned of the threat posed by election deniers and extremists in the run-up to the midterms, but that message has not resonated with American voters.

Republicans are surging in the closing days of the election season as inflation, the economy, and crime have emerged as voters’ most dominant concerns. It is widely expected that Republicans will regain control of the House and possibly the Senate on Nov. 8.

“The scare tactics and fear-mongering aren’t working,” said Jimmy Keady, a Republican strategist. “Voters are fed up with the economy, crime, and open border and I don’t think anything Biden does in the next six days is going to matter.”

Democratic strategist Hank Sheinkopf agreed that Mr. Biden casting himself and his party as protectors of democracy is not resonating with voters.

“Biden is talking about it because it takes him away from the problems that are facing the nation right now, which are the cost of gas, the cost of food, and the sense that things are out of control. Talking about those issues reminds people that this situation occurred under his presidency when he had the most power to alleviate it,” he said.