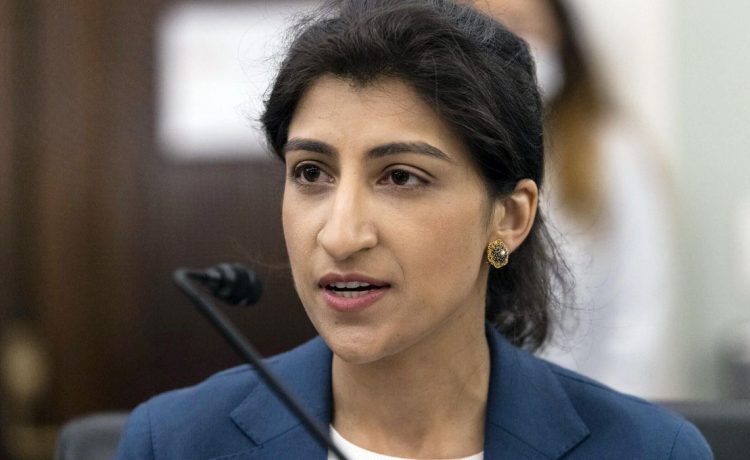 Amid backlash about increasing overreach, Federal Trade Commission Chairwoman Lina Khan is bracing for tough questioning Tuesday when she appears before a Senate Judiciary panel that oversees federal enforcement of antitrust laws.

Ms. Khan will testify before the Senate Subcommittee on Competition Policy, Antitrust, and Consumer Rights, alongside Jonathan Kanter, the assistant attorney general who heads the Justice Department’s antitrust divisions.

It will be Ms. Khan’s first time facing the panel since she took over the role of FTC chair in June 2021. It also comes amid a rising backlash against her expanding and extending the role of the FTC beyond the commission’s historic boundaries to more aggressively restrict mergers and block business practices the commission deems unfair.

Ms. Khan’s actions have triggered several lawsuits from pro-business groups and the commission, under her leadership, is now tangled in a legal challenge from Walmart over efforts to curb the retail giant’s money transfer services.

In an unusual move, the Chamber of Commerce sued the FTC in July over a lack of transparency and accountability, which, Chamber officials said, increases uncertainty for businesses and holds back new investments.

“The FTC is pursuing an aggressive agenda with far-reaching implications for American businesses and the economy,” Chamber president Suzanne Clark said. “It is bypassing longstanding norms to expansively regulate industries and manage our economy with a government-knows-best approach. We have witnessed the agency take a series of steps that collectively circumvent due process, concentrate power into the hands of the chair, and utilize dubious legal means to achieve pre-ordained ends.”

A big tech critic, Ms. Khan has divided the five-member commission and triggered a blowback for suing to block Facebook from acquiring the virtual-reality app developer, Within Unlimited.

The FTC moved ahead with the suit over the objections of the FTC staff and the panel’s two Republican appointees.

Deborah Collier, a lobbyist for the watchdog group Citizens Against Government Waste, said the more aggressive actions taken by the FTC amount to mission creep and abandon the commission’s designated purpose of acting in the best interest of consumers.

Ms. Collier said the FTC plan, led by Ms. Khan, to write new rules on consumer data privacy protections even while Congress is focused on passing related legislation, is a significant overreach of the commission’s authority.

“Congress hasn’t given them the full authority to completely re-envision consumer data privacy,” Ms. Collier told The Washington Times. “That’s up to Congress, not the agency.”

Ms. Collier said the FTC  moved to expand its power when it voted last year to rescind a 2015 antitrust policy statement and broaden the kinds of competitive actions it would seek to challenge.

The vote was 3-2 and both GOP commissioners voted against it, warning it could lead to FTC overreach.

Critics said it would lead to abusive antitrust enforcement. Ms. Khan said the rescinded policy statement “constrained the agency’s use of its authority to stop anti-competitive business tactics.”

Since voting to expand its authority, the FTC has gone beyond simply looking out for the consumer or looking for antitrust violations, Ms. Collier said.

In the case of the FTC’s lawsuit blocking Facebook from acquiring the virtual reality app, she said, the commission is not acting to protect consumers but is rather blocking a business from expanding.

An FTC spokeswoman said the FTC is charged with protecting consumers and promoting competition.

“The FTC is using the tools Congress provided to the agency to fulfill this mandate. Our actions in suing to block anti-competitive mergers and business practices, to explore whether new rules are needed to protect consumers from commercial surveillance and lax data security practices, and to ensure companies do not engage in misleading and deceptive marketing tactics are not only within our authority but are a key part of the mission of the agency,” the spokeswoman said.

In a Sept. 16 speech at Fordham University, Ms. Khan said the agency is working on a new policy statement governing its authority to stop anti-competitive business tactics.

“I believe that we must take ‘unfair methods of competition’ seriously as a legal standard,” Ms. Kahn said.

Tuesday’s Senate hearing will be chaired by Sen. Amy Klobuchar, a Minnesota Democrat who has sponsored several bills, including an antitrust measure, aimed at reining in the power of Big Tech.

Ms. Khan will face tough questioning from the four Republicans on the panel, all of whom voted against her confirmation.

Sen. Mike Lee, Utah Republican, did not respond to a media inquiry about the hearing but said in a statement last week he will question Ms. Khan about her use of unpaid, far-left consultants as government advisors, a practice criticized by the FTC inspector general.

Some of the consultants came from liberal philanthropy organizations while three others work for tech companies that compete with companies subject to FTC’s jurisdiction.

Under Ms. Khan’s leadership, the FTC is taking on retail giant Walmart, suing the company for “facilitating money transfer fraud” that allowed hundreds of millions of dollars to be stolen from consumers.

Walmart, seeking to have the lawsuit tossed, arguing the FTC does not have constitutionally valid authority to sue.

The FTC is also up against significant pushback from the auto industry over proposed new rules that would pile on regulations for the sale of most cars, boats, motorcycles and RVs.

According to the FTC, the proposed rules would prohibit surprise junk fees, bait-and-switch claims, such as those about the cost of a car or financing terms, and require “full upfront disclosure of costs and conditions.”

FTC officials said the proposed rules “would save consumers time and money and help ensure a level playing field for honest dealers.”

“It will drastically, drastically alter the entire process by which Americans shop for, inquire about, purchase and finance new vehicles,” Mr. Allen said. “Consumers will suffer in the form of higher prices, much longer transaction times, and a pricing, purchasing and financing experience that is far more complex, confusing and inefficient than it is today.”