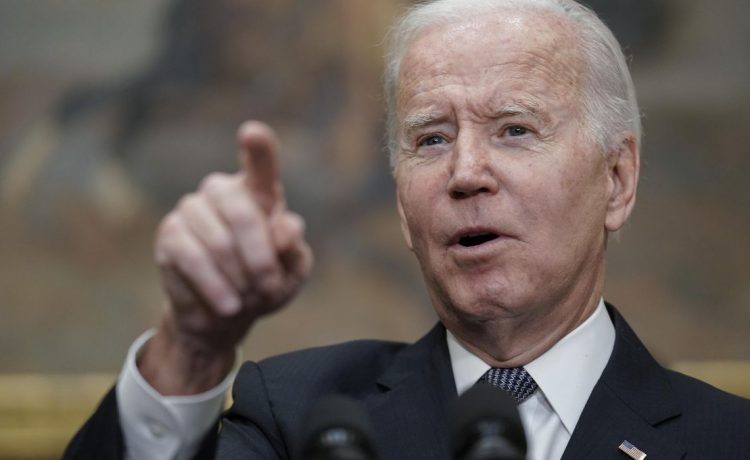 President Biden increasingly shows flashes of rage, responding to reporters with angry outbursts and prickly retorts when he doesn’t like the questions.

The president is clearly irritated about the likely midterm disaster for Democrats and taking that anger out on reporters who challenge Mr. Biden’s version of reality, political analysts surmise.

“Biden is looking at the polls and he’s very afraid of what’s coming. He’s expressing that frustration at the people who relay his message,” said Robert Rowland, who teaches presidential rhetoric at the University of Kansas.

This week was marked with some particularly testy exchanges between Mr. Biden and reporters. On Thursday, the president snapped at multiple reporters who asked him questions about the abortion issue and Democrat candidates who don’t want to be seen with him on the campaign trail.

As Mr. Biden spoke to the press at the White House, he was asked if there “should be any restrictions on abortion at all?”

“Yes, there should be,” Mr. Biden replied.

The reporter then followed up, “What should they be?”

Later that day, Mr. Biden campaigned alongside Lt. Gov. John Fetterman, a Democrat running for U.S. Senate in Pennsylvania. When a reporter asked Mr. Biden why there haven’t been many candidates campaigning with him, he abruptly cut her off.

Before storming off, he barked: “Count, kid! Count! Alright!.”

Those exchanges come after a particularly cantankerous back-and-forth on Wednesday with Fox News’ Peter Doocy.

Mr. Doocy asked the president if abortion or inflation was a bigger priority for his administration.

“All important! Unlike you, there’s no one thing. It crosses the board… domestic… ask me about foreign policy, too.” he said.

Earlier this year, Mr. Biden called Mr. Doocy a “stupid son of a bitch” when asked a question about inflation.

The White House refused to comment on the president’s brusque exchanges.

Ahead of the Nov. 8 midterm elections, which will determine control of the House and Senate, Mr. Biden has been saddled with problems. His approval rating remains stuck at 40%, according to a recent Reuters/Ipsos poll.

A New York Times/Siena College poll showed likely voters are inclined to vote for Republicans by a 49% to 45% margin. Independent women, who were expected to support Democrats, have moved sharply towards Republicans over the past month, the same poll found.

At the same time, gas prices are rising again after dropping for several weeks in the early fall. Inflation is still raging and the stock market has taken a drubbing. The Republican message that Democrats are soft on crime and ill-equipped to handle inflation has resonated with voters, according to polls.

Republicans say as Mr. Biden’s troubles mount, the press has stopped giving him the kid-glove treatment he received during his first year. That’s made him irritable, they say.

“It’s been a pretty bad week and a half for Joe Biden,” said Jimmy Keady, a Republican strategist. “The press was pretty kind to him and gave him a lot of passes. Now the press is asking him questions and he’s not used to that.”

Brad Bannon, a Democratic strategist, didn’t deny that Mr. Biden showed a short fuse with the press, but he chalked it up to the stress and challenges of a tough midterm campaign entering the homestretch.

“A lot of people, including the president who has a lot at stake here, get very passionate at the end of a campaign. That’s what’s happening here,” he said.

The skirmishes with the reporters clash with the promise of transparency and respect for the press that former White House press secretary Jen Psaki announced at her first briefing. Ms. Psaki, who quit the White House in May, made the pledge in an attempt to contrast Mr. Biden with his predecessor.

Former President Donald Trump was antagonistic toward the press with angry rhetoric and labels of “enemy of the people” and “fake news.” He also angrily admonished reporters, including yelling at a journalist who asked him in late Nov. 2021 if he would concede the election to Mr. Biden.

For Mr. Trump, the tough talk with reporters was part of his persona as a rough-and-ready political pugilist standing up to the media elites. The Trump base ate it up, but the same behavior could backfire for the current president, Mr. Rowland said.

“Trump was playing to a narrative that reinforces his persona with his base,” Mr. Rowland said. “Biden is not doing that. Biden is just expressing frustration with the political situation. He isn’t helping himself.”

“It shows that Joe Biden is a human being and Americans like it when presidents show passion. They get into trouble when they don’t show any passion,” he said.